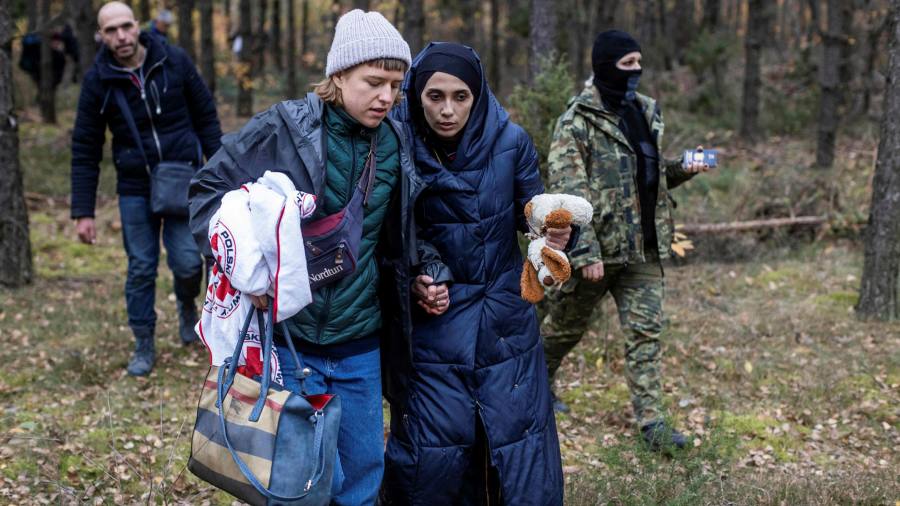 Lama, a 21-year-old Syrian student, and her ailing father had been stuck in the unforgiving terrain of the Poland-Belarus border for more than three weeks by the time Kamil Syller found them.

“The father has cancer and he needs treatment. He and his daughter tried to get to a country where he could get better care . . . where it wouldn’t be dangerous,” said the Polish activist. “Instead he found himself in a forest.”

The two Syrians are part of a surge of migrants attempting to enter the EU via its eastern border, a movement of people that both the EU and Poland say is orchestrated by Belarus’ dictatorial leader Alexander Lukashenko in retaliation for Brussels’ support for Belarus’ persecuted opposition.

Since the summer, thousands of migrants from countries including Iraq, Syria and Somalia have flown to the Belarusian capital Minsk, before being transported to its western border with the EU.

There, many trying to slip into Poland have found themselves trapped in the woods that span the border, sandwiched between Polish forces that will not let them enter, and Belarusian security services that refuse to let them retreat.

Official figures suggest that the influx is accelerating. Poland’s border guard agency said last week that of the 24,500 illegal attempts to cross the border with Belarus this year, more than half had come this month.

Activists and doctors say that as the stand-off has worn on, the state of the migrants they have been treating has worsened. Medical problems range from hypothermia, hunger and dehydration to conditions such as diabetes.

“I think it’s because these people are spending longer and longer in the forest, and it’s getting colder and colder,” said Malgorzata Nowosad, from the Medycy na Granicy group of volunteer medics that helps the migrants. She pointed out that about 10 per cent of the migrants in the forests were children.

The Polish government has responded by declaring a state of emergency in a strip of land adjoining Belarus — banning access to non-locals, including NGOs and the media — and dispatched thousands of troops and police to seal the border.

Ramping up rhetoric against migrants, it plans to spend €350m on a border wall, and has passed legislation that critics say allows security forces to push back migrants found on Polish territory into Belarus.

Activists say this breaches international law. But Poland’s government has insisted that it is acting legally and has an obligation to defend its territory.

Officials say that attempts to provide aid to migrants on the Belarusian side of the border via legal crossings have not been accepted by Minsk. “We put the security of our fatherland above everything,” Mariusz Blaszczak, Poland’s defence minister, said last month.

Locals living in the border zone, now filled with police checkpoints and military patrols, say that the crisis has upended normal life. “At some point we had, say, 100 soldiers, 50 migrants and 20 locals in the village,” said Mateusz Wodzinski, who lives less than two kilometres from the border.

“[The migrants] would cross the border, run into the forest. And then the border guard and the army were trying to find them, and kick them back out. And they just kept going round and round.”

Even in places which have not been heavily affected, many are unsettled by the influx. “If [the migrants] had good intentions they would cross the border legally,” said a woman who was visiting her mother’s village near the emergency zone. “If not, it means they have bad intentions.”

Others are trying to help. In Michalowo, the town council set up a centre where migrants could receive aid in the local fire station. Although few have made it to the town about 20km from the border, the initiative has received so many donations of clothes, food and other supplies that it is planning to open two other storage centres, according to Konrad Sikora, Michalowo vice-mayor.

Meanwhile, Syller launched an initiative calling on locals to hang green lights outside their houses as a sign to migrants that they could find aid there. So far, he said, only one other house in his village of Werstok had a green light, but others were privately supportive.

Other volunteer groups have also been set up to provide food, water, warm clothes and power banks for the migrants. But activists are frustrated that the government will not allow them into the emergency zone. A further complication is that many migrants are too scared to seek help in case it results in them being handed over to the authorities.

“They’re afraid that will mean being sent back to Belarus and to the forest. Unfortunately their fears are justified,” said Piotr Bystrianin, from the Fundacja Ocalenie aid group.

Activists fear that the situation will worsen if the flow of migrants does not stop before Poland’s icy winter sets in, particularly as many will be unaware of the conditions they will face. “They’re totally unprepared,” Sikora said of the migrants. “When the spring comes, and the snow melts, there’s going to be a few bodies.”