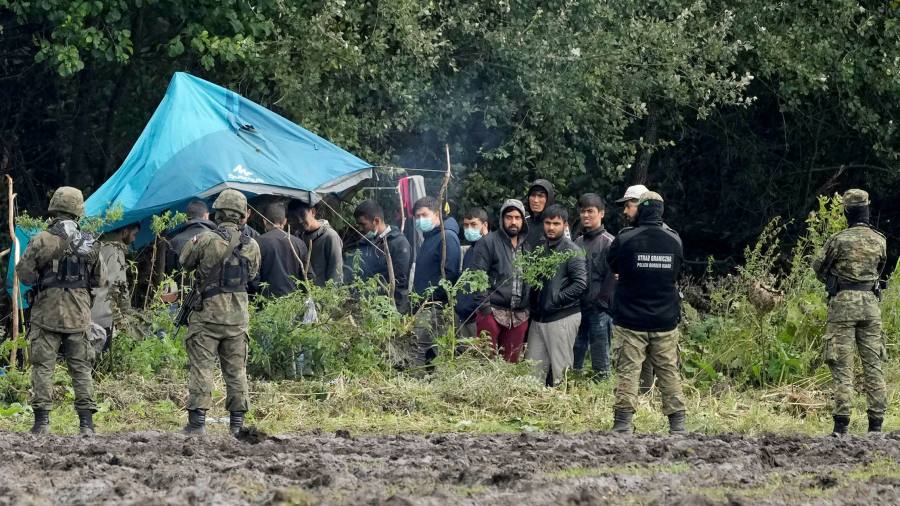 Poland is to boost the number of troops on its border with Belarus to about 10,000 in an effort to cope with a surge in migrants orchestrated by the regime of Belarus’s authoritarian leader, Alexander Lukashenko.

Mariusz Blaszczak, Poland’s defence minister, said on Monday that soldiers from the 12th, 16th and 18th divisions would be deployed to the country’s eastern flank to join the several thousand already patrolling the border.

“We will increase the number of soldiers helping the border guard by 2,500,” he wrote on Twitter. “Soon, about 10,000 military personnel will be watching over the impermeability of the border.”

Poland and the EU accuse Lukashenko’s regime of funnelling thousands of migrants to Belarus’s borders with the EU in an effort to destabilise the bloc in retaliation for the bloc’s support for the Belarusian opposition, which has been subject to a vicious crackdown over the past year.

The number of attempted illegal crossings into Poland and Lithuania has jumped in recent months, with migrants from countries including Iraq, Syria, Afghanistan and Yemen trying to enter the EU.

In response, Polish security forces have already laid kilometres of razor-wire fencing along the country’s eastern flank, and the government is pushing through legislation that will pave the way for a €350m wall on the border.

Warsaw has also passed legislation that human rights groups have condemned as an attempt to legalise pushbacks of migrants in breach of international law, and introduced a state of emergency along its border with Belarus.

Several migrants have died this year during attempts to enter Poland. Human rights groups fear that the toll could rise as winter sets in and temperatures drop further, and have criticised the Polish government for not allowing NGOs into the border zone to provide help for the migrants who have arrived there.

Poland’s border guard said on Monday that two soldiers had been injured at the weekend when a group of about 60 migrants tried to force their way into the country near the village of Usnarz Gorny, where a group was previously trapped between Polish and Belarusian forces for several weeks.

“Among those trying to force the border, officials recognised Belarusian soldiers in civilian clothes, who, among other things, cut the wire coils with scissors,” the Polish border service said in a statement.

Despite the Polish attempts to prevent entry, thousands of migrants have made it across the country to the border with Germany, which for many is the preferred destination.

On Sunday, German police disarmed about 50 far-right German vigilantes who were trying to patrol the border with Poland to keep the migrants out.

Germany’s interior minister, Horst Seehofer, said that there had been 6,162 “unauthorised entries” into Germany from Poland and Belarus this year.

“We have already strengthened the border force on the German-Polish border with 800 police,” he said in an interview with the newspaper Bild am Sonntag. “If necessary, I am prepared to increase the number further.”