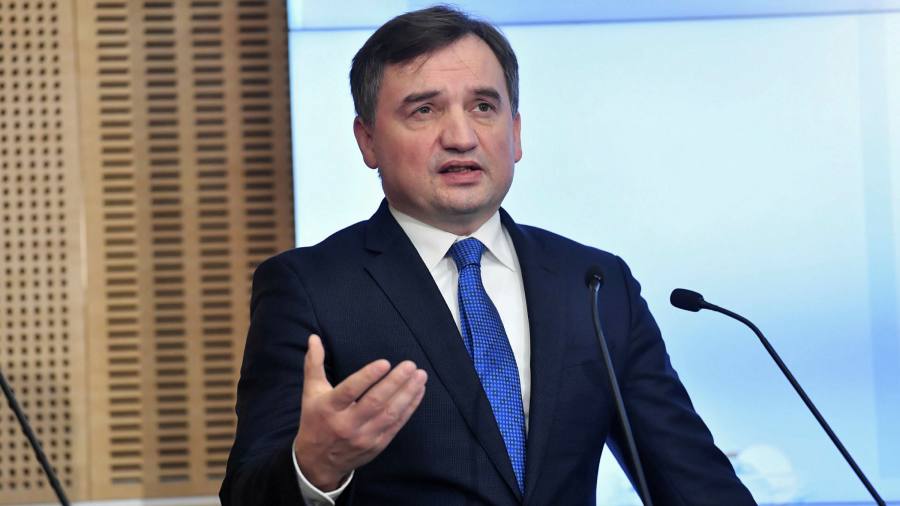 Poland’s justice minister has said the country should suspend its payments to the EU budget and veto European policies if Brussels cuts funds to Warsaw and escalates its fight over the rule of law.

Zbigniew Ziobro said the European Commission would be acting “illegitimately” if it used new powers to withhold funding from Poland over the rule of law dispute. The commission, the EU’s executive arm, has already delayed the approval of €36bn in pandemic recovery funding for Poland over the feud but is under pressure from the European parliament to use a so-called “conditionality mechanism” to take more action.

Warsaw and Brussels are battling over changes to Poland’s judicial system that the commission believes threaten judicial independence. Poland’s government insists its changes are needed to fix an inefficient judicial system.

Ziobro, who as well as serving as justice minister heads a small party whose votes help the government to maintain a wafer-thin majority, told the FT he expected the EU to back down. But he said if the conditionality mechanism — which Poland and Hungary have challenged in court — were used against Warsaw, he would demand retaliation.

“Poland should respond to EU’s blackmail with a veto on all matters that require unanimity in the EU. Poland should also revise its commitment to EU climate and energy policy, which results in drastic hikes of energy prices,” he said.

“If this dispute escalates, I will demand that Poland suspends its EU contributions. It would be justifiable since the EU illegitimately denies us funds from a joint budget that we also contribute to.”

While member states have the ability to veto some types of EU legislation which require unanimity, including taxation matters, they are legally obliged to meet their national contributions under the EU’s budgetary framework.

As part of its judicial reforms Poland created a disciplinary chamber for judges, which has been ruled illegal by the EU’s top court. European officials have said Poland should scrap the chamber, change the disciplinary rules and reinstate dismissed judges as conditions for approving Warsaw’s request for pandemic recovery funding.

Ziobro said he could “allow for the possibility” of the disciplinary chamber being dissolved as part of a reform of the Supreme Court “and entire judicial system that we have prepared”.

But annulling the disciplinary chamber’s past decisions to bar some 600 judges, or allowing judges to question the status of judges appointed since the government embarked on its judicial overhaul, would be “unacceptable”.

Some barred judges had committed criminal offences, he said, and allowing judges to question each other’s status would lead to “anarchy”.

“The European Commission is posing impossible conditions because its real goal is not to achieve a supposed rule of law but to change the government in Poland,” he added.

“It is sending a message to Poles: if you support this government, you will not get money from the EU. It is not their concern for the rule of law but a contradiction — a political diktat enforced by blackmail and an attempt to undermine a democratic decision of several million Poles.”

Officials in Brussels see the stand-off with Poland — the bloc’s fifth most populous member state — as a fundamental threat to the rules that unite its members and the biggest challenge to its legal order since Brexit.

However Ziobro said the fight was political and that Poland was the object of a “brutal attack”.

“The EU is conducting an aggressive policy and does not care about the rule of law. It is just a pretext,” he said. “Brutal economic blackmail is supposed to force Poland to agree to the EU being restructured into a federal state officially managed from Brussels, but in practical terms — from Berlin. Before that it is supposed to assure the fall of the democratically formed Polish government, which opposes this direction of change in Europe.”

Ziobro, whose United Poland party has charted a more openly Eurosceptic line than the ruling Law and Justice party, himself said in August that Poland should not stay in the bloc “at any price”. Asked about the future relationship, he said that the place of Poland was in “the Union that it joined: based on partnership of sovereign nations and states, not on the rule of the strongest and Brussels bureaucracy that is lacking democratic controls.”

However, he insisted that his party would not accept any concessions to Brussels that would result in Polish sovereignty being limited. “We will never agree for Poland to have the status of a colony,” he said.