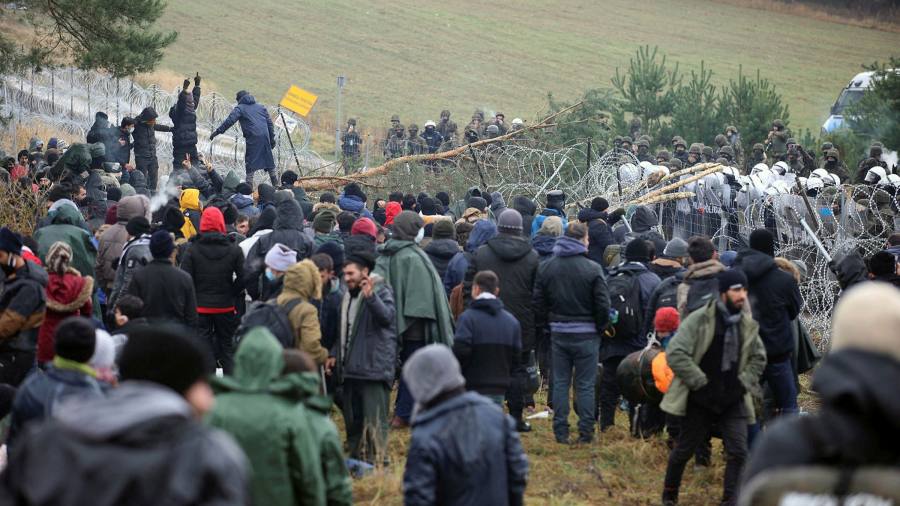 Polish officials have accused Belarus of trying to engineer a confrontation on their common border as a large group of migrants attempted to force its way into Poland from its eastern neighbour.

Poland’s defence ministry on Monday shared aerial footage of migrants gathering on the Belarusian side of the border fence near the Polish village of Kuznica, after videos on social media appeared to show a column of hundreds of migrants walking towards Poland. The interior ministry subsequently said an initial attempt to enter the country had been prevented.

“It’s clear that the [Belarusian] regime is not stopping its provocations, and is moving to the worst possible ones,” Poland’s deputy foreign minister, Piotr Wawrzyk, told state radio.

Polish officials estimated that there were between 3,000 and 4,000 migrants near the Belarusian border with Poland, and a further 10,000 elsewhere in Belarus.

The interior minister of neighbouring Lithuania said her country was considering a state of emergency for its border area with Belarus after watching events on the Polish border. Agne Bilotaite said the “really serious situation” meant the Baltic country was on “maximum alert”.

The warnings from Polish and Lithuanian officials come after a surge in attempts to enter the two countries illegally from Belarus. The EU says this is being orchestrated by Belarus’s dictatorial leader Alexander Lukashenko in retaliation for Brussels’ support for Belarus’s opposition.

Lukashenko was on the brink of being toppled by street protests against his flawed re-election last year before he launched a crackdown on dissent and secured support from Russia.

Since the summer, thousands of migrants from countries including Iraq, Syria and Somalia have flown to the Belarusian capital, Minsk, before travelling to the country’s border with the EU.

According to Poland’s border guard, there have been 28,500 attempts to enter the country illegally via Belarus since the beginning of August, including 17,300 last month.

Ursula von der Leyen, head of the European Commission, on Monday evening condemned the Belarusian authorities for “instrumentalising migrants” and called on the EU’s members to approve further sanctions against Minsk. She added that the bloc would look into how to target “third country airlines” that were helping ferry the migrants to Belarus.

In recent days, Poland has also accused Belarus of a series of other provocations on the border, including one case of three armed and uniformed Belarusians spotted inside Polish territory.

Belarus said at the time that it had not provoked any border incidents. It confirmed on Monday that “a large group of refugees” was moving towards Poland but said Warsaw was responsible for “forcing out thousands of migrants” that it had sent back to Belarus.

“The refugees’ desperate step was provoked by the indifference and inhuman attitude of the Polish authorities,” it added.

Russia appeared to endorse Belarus’s actions. “We have no doubt here that the Belarusian migration services are taking all necessary measures to keep the situation in the legal field,” Kremlin spokesman Dmitry Peskov said, according to Interfax.

Since the number of migrants at its eastern border began to climb this summer, Poland has deployed 12,000 troops to reinforce the border guard, declared a state of emergency in land adjoining the frontier and laid barbed-wire fencing.

However, Warsaw has also been criticised for passing legislation that human rights groups say allows border guards to push migrants back into Belarus, leaving them trapped in forests along the frontier between Polish and Belarusian security forces.

Despite the measures, the number of migrants managing to enter has risen steadily. In Germany, police said last week that there had been more than 8,400 “unauthorised entries” this year by people who came via Belarus.

“This is payback for Poland’s [support for the Belarusian opposition], but this is also the direct route to Germany,” said an EU diplomat.