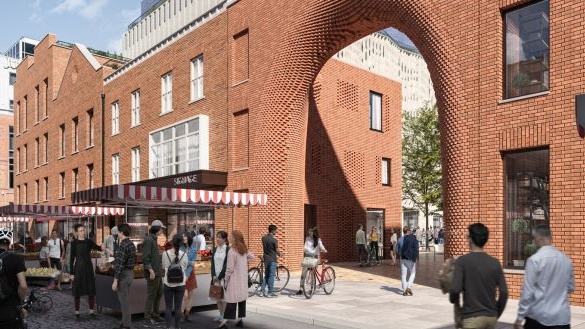 Some of first plans for Dublin city’s most prominent redevelopment site, the 5.5-acre plot stretching from O’Connell Street to Moore Street, have been approved by Dublin City Council.

UK property group Hammerson last June lodged three applications for a mixed retail, office and residential scheme on the large north inner city block formerly known as the Carlton site, parts of which have lain vacant and derelict for more than 40 years.

The site, which stretches west from O’Connell Street to Moore Street, and north from Henry Street to Parnell Street, is being developed under six separate planning applications.

Two of the first three applications, which focus on Moore Street and Henry Street, and include residential, hotel, retail, restaurant and cafe and cultural uses, have now been approved by the council.

In relation to the third application which largely pertains to the northern end of Moore Street at O’Rahilly Parade, the council has asked Hammerson to revise its plans. The council is seeking an amended daylight and sunlight analysis on the effect the development will have on neighbouring apartments.

However, the two approved applications are the more substantial, with one involving the land surrounding the 1916 Rising National Monument buildings at 14-17 Moore Street.

These State-owned buildings are due to be developed separately as a 1916 Rising Commemorative Centre, a project expected to cost at least €16.25 million.

The application surrounding this site had been controversial as it proposed a large archway beside the national monument, leading into an open courtyard, which broke up the Moore Street terrace. As part of the conditions attached to the grant of permission the archway must be reduced in scale and its detailing more closely aligned to 17 Moore Street.

The Department of Housing had made a submission to the council opposing the demolition of number 38 Henry Street, saying it was “unnecessary”. However the council has approved its removal.

While the council has approved Hammerson’s plans it is likely they will be appealed to An Bord Pleanála.

The site was for years known as the Carlton site as originally it just encompassed the old Carlton cinema, the plot beside it that had been vacant since 1979, and some backlands between O’Connell Street and Moore Street.

Hammerson three years ago decided to scrap the existing 2010 planning permission for a €1.25 billion enclosed shopping complex on the site which runs west from O’Connell Street to Moore Street, and north of Henry Street to Parnell Street.

Instead it plans a more open scheme which will restore the historic street pattern, and will include a new east-west pedestrian street between O’Connell Street and Moore Street, two new civic squares, shops, offices, apartments, hotels and an underground station for the new Metrolink rail line.

As part of the next three applications the facade of the old cinema will be restored, though the cinema itself will not be retained in situ. Three protected structures, 42 O’Connell Street – the last remaining Georgian house on the street, O’Connell Hall at the back of No 42, and Conway’s pub, will also be restored.