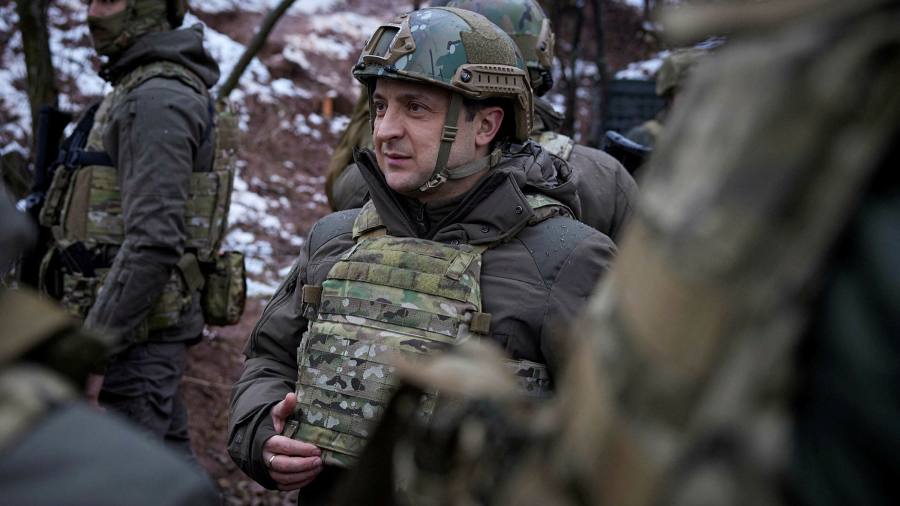 Despite weeks of ever more insistent US warnings that Russia could launch a full-blown invasion of Ukraine this winter, Volodymyr Nahorniy spent Wednesday evening at a ski shop in Kyiv splashing out $500 on kit for two planned snowboarding trips.

Staff at the store say they were overwhelmed with customers two weeks ago during a Black Friday sale — mostly young entrepreneurs like Nahorniy, a 28-year old who works in Ukraine’s booming IT industry.

“Time will show us what we face,” he said. “We are already at war with Russia,” he said, referring to the conflict with Russian-backed separatists in eastern Ukraine that first erupted after Russia’s annexation of Crimea in 2014.

According to US intelligence assessments shared widely with western allies, President Vladimir Putin is amassing up to 175,000 Russian troops and heavy weaponry around Ukraine’s borders and may intend to launch an offensive.

But in Ukraine, where officials have spent weeks playing down the threat pinpointed by Washington, there is little sign of alarm. Instead of panic-buying, cafés, bars and shopping malls are packed. The country’s oligarch-owned media is more interested in domestic political intrigues than a Russian onslaught. Ukrainians have grown accustomed to conflict, given that the war in the Donbas has rumbled on for seven years and taken 14,000 lives.

“Ukrainians have seen this film before — that is, large build-ups of Russian troops on the borders,” said Brian Mefford, an American businessman based in Kyiv. He was referring to the deployment of 110,000 Russian troops along Ukraine’s borders earlier this spring. The Kremlin said it was a military exercise but used the deployment to extract a summit with US president Joe Biden in June.

Many of the thousands of voluntary fighters who played a critical role in pushing back in 2014 will go back to the front lines.

“There is no panic whatsoever — not for me, not with any of my friends, not with anyone,” said Valery, a 54-year old businessman shopping for Christmas with his wife and son. “It seems to me Ukrainians don’t fear anything after all of these years.”

Like many of his compatriots, Valery expressed a weary resignation that Ukraine was the victim of a wider geopolitical game between Moscow and Washington.

Putin, he said, was playing a game of brinkmanship to scare western-backers from providing further defensive weaponry to Kyiv and accepting the country’s bid to join the Nato military alliance.

“We are just pawns on a chessboard,” he said.

Biden’s decision this week to agree to talks with Putin over Russian concerns about further Nato expansion has reinforced Ukrainian suspicions that Moscow’s military build-up is simply a form of intimidation rather than an active military threat.

“This is a Russian attempt to manipulate Biden to reduce American support for Ukraine,” said Oleksander Danylyuk, chair of the Kyiv-based Centre for Defense Reforms. “Biden is behaving in the way Russia wants him to behave.”

In an attempt to try to reassure investors President Volodymyr Zelensky played down the risks of a full-blown invasion in a recent meeting with business leaders.

“President Zelensky is assuring us that foreign direct investment in Ukraine is safe,” said Andy Hunder, president of the American Chamber of Commerce in Ukraine. “Companies are operating business as usual, showing positive financial results for the year.”

At the same time Zelensky has tried to galvanise Ukraine’s armed forces, just in case. He has held televised rallies with troops around the country, parading armoured vehicles and patrol boats provided by the US.

Ukraine’s army of 250,000 is better trained and battle hardened. It is also better equipped, with stockpiles of US-provided Javelin anti-tank busters, upgraded tanks and armoured vehicles. It also has Turkish-built Bayraktar drones that were deployed, to Moscow’s fury, against Russian-backed forces in Donbas. Kyiv plans to acquire naval vessels and missiles from the UK and Turkey.

Ukrainians may not be alarmed, but they are beginning to prepare.

“Many of the thousands of voluntary fighters who played a critical role in pushing back in 2014 will go back to the front lines; many have recently joined the government’s newly formed nationwide territorial defence forces,” said Lada Roslycky, an American security expert who heads the Ukraine focused consultancy Black Trident.

One businessman living in a city close to Ukraine’s border with Russia told the Financial Times he was considering moving westward to Kyiv and eventually to elsewhere in Europe if the capital were to fall.

Clutching his brand-new snowboard boots, Nahorniy contemplated what he would do this winter if Putin decided to strike.

“I will be planning to defend my family, not snowboarding,” he said, before adding: “It depends how big of an invasion it will be.”