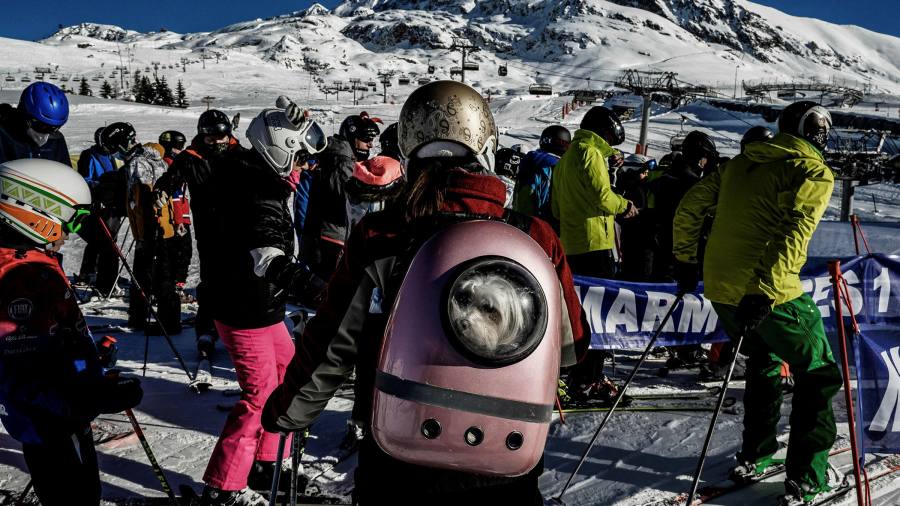 France has taken the most radical step by banning tourist travel to and from the UK, which is battling an Omicron-fuelled surge in Covid-19 infections, causing the cancellation of thousands of ski holidays and trips to second homes in the country.

Several Eurostar trains from London to Paris sold out on Thursday and Friday as people rushed to travel before the Saturday deadline. But hoteliers at the Morzine resort in the French Alps were inundated with cancellations after the announcement. Sara Burdon, communications manager at the Morzine tourism office, described it as “the worst kind of timing”.

“Every British booking we’ve got as of this Saturday is going to be cancelling or is already cancelling, which represents well over 50 per cent of all Christmas and New Year bookings and over 60 per cent of January bookings,” she said.

With half of the customers gone and no government support, Burdon said she expected the impact would be even more severe than last winter when ski lifts were closed.

John Dredge, who owns More Mountain, a 350-guest chalet business in Morzine, said “this week’s rule change could be the nail in the coffin”. All of his post-Christmas bookings have been cancelled, equivalent to one twelfth of £2.5m annual turnover. “Knee-jerk reactions are being made week after week that massively affect us,” he said.

Jean-Baptiste Lemoyne, France’s tourism minister, called on French citizens to step in and fill the gap. “About 15 per cent of ski tourism business in France is from UK travellers, so we did not take this decision lightly,” he told France Info radio on Friday. “I’d encourage French people who had not reserved a ski trip since the availability was quite low before to try to book now out of solidarity.”

The restrictions on British tourists were “yet another blow” after two tough years, said Niall Walsh, chief operation officer at Direct Ferries, a booking service. Christmas was among the busiest times on the Dover- Calais route.

Scientists believe that Omicron, identified in South Africa in November, to be more transmissible than earlier variants and more likely to evade the immune protection provided by vaccines or previous infection. At a summit on Thursday in Brussels, some EU leaders attacked unilateral actions they said was undermining efforts to maintain a common system to Covid-era travel inside the union.

But they appear to be fighting a losing battle as politicians sought to protect their populations from infection and health systems from becoming overloaded. Ursula von der Leyen, European Commission president, has suggested PCR tests for all travellers from outside the EU to try to preserve free movement in the borderless Schengen zone. Several countries including Italy, Portugal and Greece now demand people take tests before arriving.

Filippo Taddei, senior European economist at Goldman Sachs, said the restrictions would present “challenges” for winter tourism. He estimated that an international travel ban on the industry would knock about 0.5 percentage points off growth in Italy and France and about 0.2 percentage points off Swiss growth.

International visitors accounted for as much as three-quarters of tourism in the Alpine region of Austria, roughly half of it in France, Italy and Switzerland, and about a quarter in Germany, according to Taddei.

But there were already signs that tighter domestic restrictions were damping demand at restaurants, hotels and bars in many parts of Europe.

IHS Markit said its monthly survey of eurozone purchasing managers found “a steep fall in tourism and recreation activity of a similar magnitude to the declines seen at the start of the year amid rising Covid-19 infection rates and associated restrictions across the region”. It said this contributed to a fall in new inflows of business for euro area services companies to the lowest level since May, when they were rebounding from the last round of lockdowns.

Italy, Greece and Portugal this week announced that even vaccinated visitors from the EU would be required to present a negative test result, joining Ireland. Greece’s similar measure takes effect from December 19 and will only apply during the Christmas period.

Kyriakos Mitsotakis Greek prime minister, said he needed “to gain additional time to boost as many people as possible”. Businesses are concerned. “The changes and travel restrictions are the biggest problems we face in this phase of the pandemic’‘, said Yannis Retsos, head of the Greek Hotel Federation. “It has an impact on hotel reservations, even the limited number we have due to winter are under doubt.”

Switzerland, another popular ski destination, requires all travellers — whether vaccinated or not — to present a negative PCR result before entry, and to complete further testing on day four and seven of their stay.

Neighbouring Austria, which has just emerged from a three week national lockdown, and other EU members such as Belgium and the Netherlands require tests only for the unvaccinated.

Sweden imposed its first restrictions on travellers from its Nordic neighbours on Thursday, demanding proof of vaccination, prior infection, or a negative test. Meanwhile, Finland has introduced a requirement for travellers from the UK, Norway and Denmark to test themselves at the border. In addition from Tuesday, all travellers from outside the Schengen zone will have to show a pre-departure negative test.

Additional reporting by Leila Abboud and Anna Gross in Paris, Martin Arnold in Frankfurt, Sam Jones in Zurich and Richard Milne in Oslo