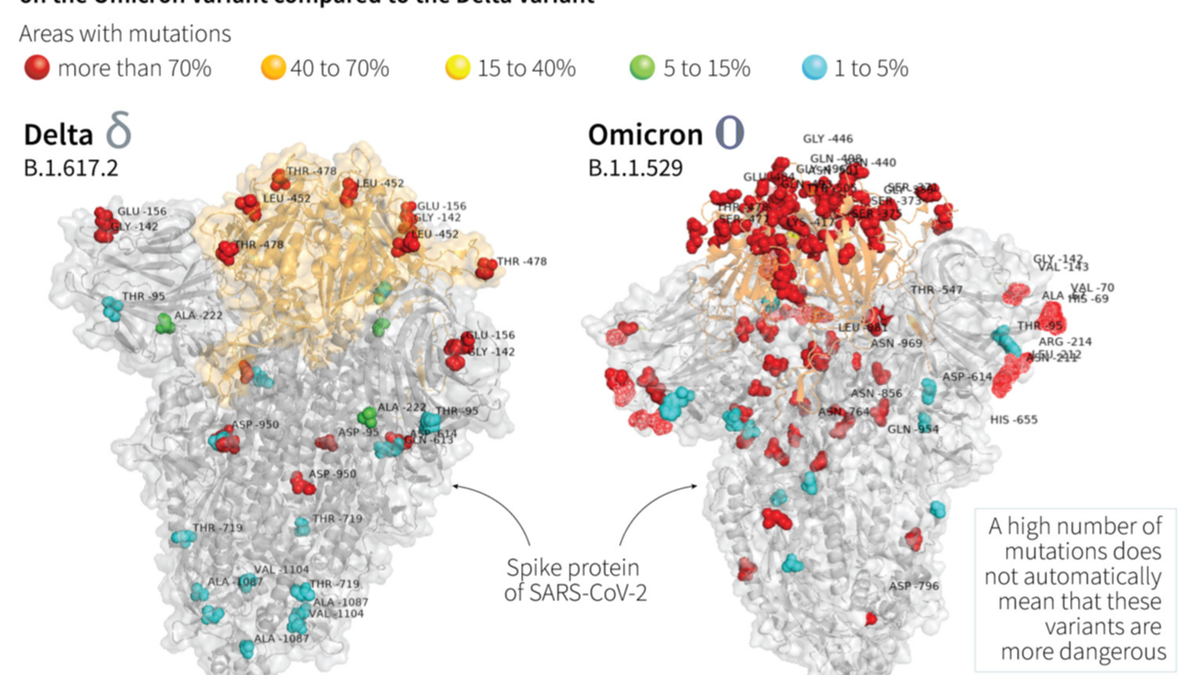 A concerning image has surfaced revealing the high amounts of mutations of the new COVID-19 strain Omicron, compared to that of the Delta Variant.

The graph, from the Bambino Gesu hospital in Rome, shows the Omicron has more spike proteins than the Delta variant when the two are compared.

Spike proteins are used by the virus to latch onto and infect human cells.

“We can clearly see that the Omicron variant presents many more mutations than the Delta variant, concentrated above all in one area of the protein that interacts with human cells”, the researchers said.

“This does not automatically mean that these variations are more dangerous, just that the virus has further adapted to the human species by generating another variant.

“Other studies will tell us if this adaptation is neutral, less dangerous, or more dangerous.”

As scientists race to learn more about the new variant, what they do know is that the virus is much more likely to mutate in places where vaccination is low and transmission high.

The new variant, was first identified in South Africa, although it is unclear whether it originated there or whether it was brought into the country from elsewhere in the region.

“It has probably emerged in another country and has been detected in South Africa, which has very, very good genomic sequencing capacity and capability,” Michael Head, a senior research fellow in global health at the University of Southampton, told CNN.

“It might well be a consequence of an outbreak, probably in some parts of sub-Saharan Africa, where there’s not a huge amount of genomic surveillance going on and vaccination rate is low.”

Mr Head also said the emergence of new variants was “a natural consequence of being too slow to vaccinate the world.”

“We still have large unvaccinated populations, like we have across sub-Saharan Africa, and these are susceptible to big outbreaks,” he said.

New variants of the virus that have caused problems in the past, Head added, have all emerged from places that experienced big, uncontrolled outbreaks, such as when the Alpha variant was first detected in the UK last December, or the Delta variant that was first found in India in February.

The Omicron variant is already spreading across the world – as of Sunday, it has been detected in a number of countries including South Africa, Botswana, Australia, the UK, Germany, Italy and Belgium.

Many countries across the world have reacted to the news that South African scientists discovered the new variant by swiftly shutting their borders to travelers coming from countries in the region, including South Africa, Botswana, Zimbabwe, Namibia, Lesotho, Eswatini, Mozambique and Malawi.

But scientists and public health experts and advocates have warned that the huge gap between vaccination rates in the developed and developing world is likely to blame.

Jeremy Farrar, the director of the Wellcome Trust, a health research charity, said the new variant shows why the world needs to ensure more equitable access to vaccines and other public health tools.

“New variants are a reminder, if we needed it, that the pandemic is far from over,” he said on Twitter.

“Inequity is what will extend the pandemic.”

‘New variants are a reminder, if we needed it, that the pandemic is far from over’

According to the World Health Organisation (WHO), only 7.5 per cent of people in low-income countries have received at least one dose of the coronavirus vaccine.

Across the eight countries most affected by the travel bans related to the Omicron variant, the proportion of populations that have had at least one vaccine dose ranges from 5.6 per cent in Malawi to 37 per cent in Botswana.

Meanwhile, 63.9 per cent of people in high-income countries have received at least one shot, according to WHO.

Writing in The Guardian newspaper on Saturday, Gordon Brown, WHO’s ambassador for global health financing, said that the world’s “failure to put vaccines into the arms of people in the developing world is now coming back to haunt us. We were forewarned – and yet here we are.”

“In the absence of mass vaccination, COVID is not only spreading uninhibited among unprotected people but is mutating, with new variants emerging out of the poorest countries and now threatening to unleash themselves on even fully vaccinated people in the richest countries of the world,” he wrote.