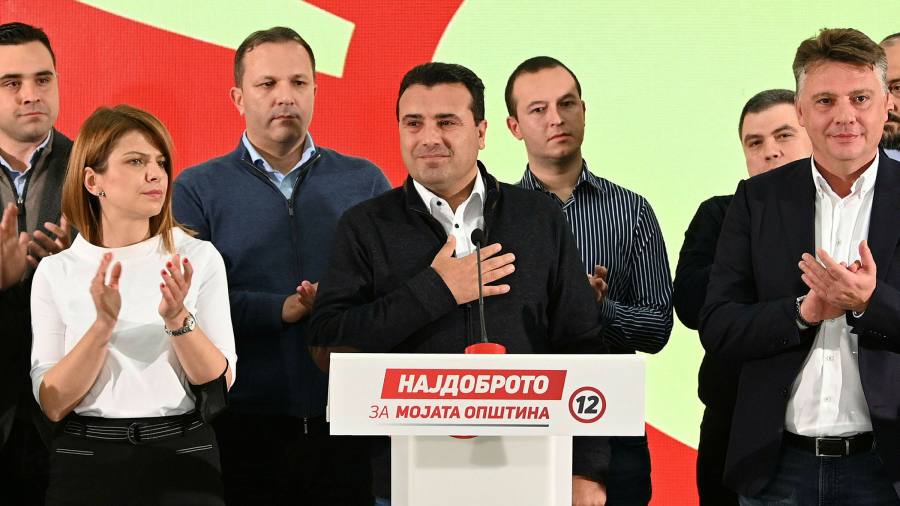 Zoran Zaev has announced his resignation as North Macedonia’s prime minister and leader of the ruling Social Democratic party (SDSM) after a landslide defeat in local elections.

His party lost heavily in the capital, Skopje, and across the Balkan country in municipal polls at the weekend as voters punished the government for deadlocked EU accession talks and stuttering local reforms.

Announcing his resignation on Sunday, Zaev resisted calls from the rightwing opposition VMRO-DPNME for a snap election, saying the government would be overhauled but would stay in place until polls scheduled for 2024.

“I will stay as long as it takes to help reorganise the new government with a progressive majority which it has and which exists — and may be even increased (down the line),” he said in a statement.

Zaev took office in 2017, a year after his predecessor Nikola Gruevski, was forced out by popular protests amid allegations of fraud and abuse of power, which the EU characterised as “state capture”. Gruevski, who had been in power for a decade, fled to Hungary to avoid being held to account.

During Zaev’s four-year premiership Skopje resolved a longstanding dispute with Greece over the country’s name, changing it to North Macedonia to open the door for EU accession talks. The talks have yet to start as neighbouring Bulgaria blocks the country’s membership over historical cultural disagreements.

Laszlo Markusz, a Balkans expert at the Hungarian Foreign Policy Institute, said the pro-EU Zaev had made too many concessions on national identity and had “failed to deliver benefits he promised in return”.

Economic progress had also been “slower than his supporters might have expected”, Markusz said, adding that a general election would be likely to return rightwing parties to power.

Florian Bieber, a Balkans expert at the university of Graz, said Zaev’s government had invested its political capital and energy into EU membership talks: “engaging in sensitive compromises without rewards”, which made it look weak.

Zaev, who took North Macedonia into Nato in 2020, said he was certain EU talks would begin in the next few months.

“For those of us progressives who believe in and rejoice in these historic successes, unfortunately, political punishment has come,” he said.

“The power is delegitimised as of tonight and this is the new reality, which I expect with time will be manifested in parliament,” Mickoski said on Sunday night. “But it’ll be best if this happens through a snap vote.”

But he said North Macedonia would remain on a westerly path and “fight to be integrated in the EU”.