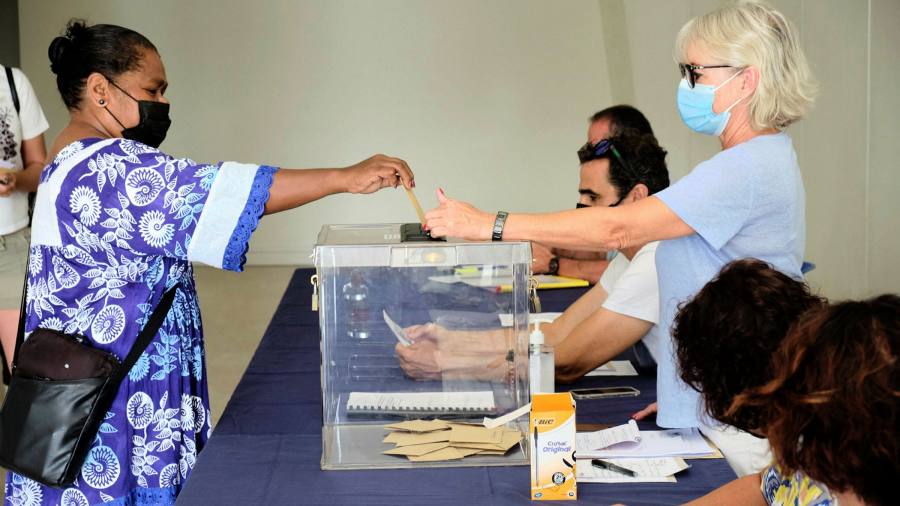 France’s Pacific island territory of New Caledonia voted overwhelmingly against independence on Sunday in the last of three scheduled referendums since 2018, but difficult negotiations over its future are expected to continue following a boycott of the latest vote by pro-independence militants.

With most of the votes counted, 96.5 per cent of those who cast their ballots opposed independence, the government said. Turnout was low at 43.9 per cent because of the boycott.

New Caledonia, which lies 1,500km east of Australia and has a population of 270,000, is one of the world’s biggest nickel producers and gives France influence over a large maritime zone in the South Pacific. Tesla, the electric carmaker that needs nickel for its batteries, this year agreed to buy New Caledonian nickel from a Trafigura-backed consortium.

Those who support the idea of the islands remaining part of France argue that the territory is coveted by an expansionist China and allows the French to maintain their status as an Indo-Pacific power. That argument was recently undermined by Australia’s decision to cancel a large submarine contract with France and buy nuclear-powered vessels from the US and the UK instead.

The pro-independence camp in New Caledonia, a territory seized by France in 1853 under Napoleon III, had appeared to be gaining ground in the previous two referendums, with the No vote winning 56.7 per cent in 2018 but only 53.3 per cent last year.

This time the Kanak and Socialist National Liberation Front (FLNKS), which has been riven by internal dissension, called for a boycott on the grounds that the Covid-19 pandemic made a fair contest impossible.

The three referendums were held under the terms of the Nouméa Accord of 1998, which set out a path towards autonomy and was designed to put an end to years of dispute and sometimes violent clashes.

Now that the population has voted no to independence three times, there are plans for 18 months of negotiations to discuss the territory’s future status, to be followed by yet another referendum to validate whatever decision is reached.

“New Caledonia will therefore remain French,” President Emmanuel Macron said in an address to the nation on Sunday, but he added: “We can’t ignore that the electorate has remained deeply divided despite the years that have passed . . . A period of transition begins.”

Macron, who models himself on General Charles de Gaulle and has promoted the country as a global power with big interests in the Pacific, has previously said France would be “less beautiful without New Caledonia”. On Sunday, he said: “Tonight France is more beautiful, because New Caledonia has decided to stay.”

The French president has nevertheless been criticised as weak by rightwing nationalist political rivals seeking to thwart his bid for re-election in the presidential election in April.

Sébastien Lecornu, Macron’s overseas minister, was denounced by the right for saying the government was “ready” to discuss autonomy for the French Caribbean island of Guadeloupe to defuse angry street protests there over Covid vaccines and lockdowns.