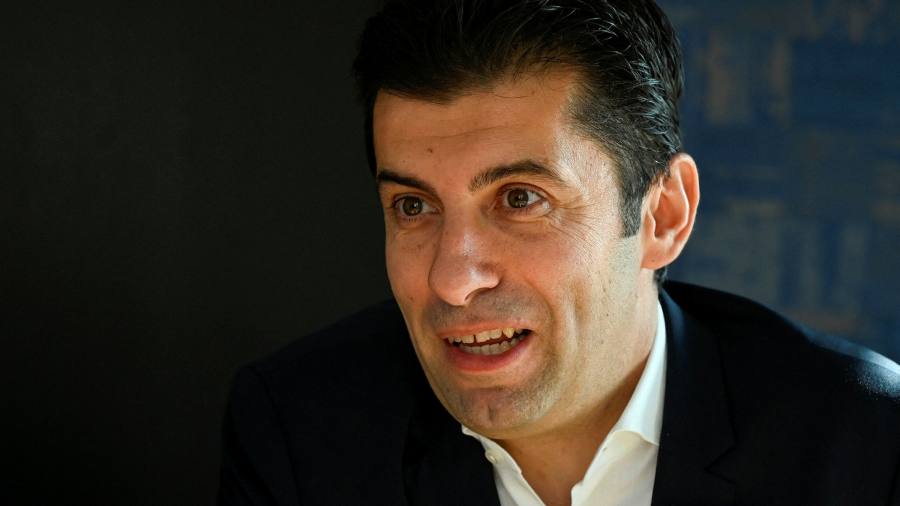 Bulgaria’s new prime minister has signalled that Sofia will end its obstruction of North Macedonia’s bid to join the EU once his new government takes office in the coming weeks.

Kiril Petkov, who was confirmed as premier by the country’s parliament on Monday after his party took the largest share of the vote in November’s elections, made the pledge as he reaffirmed Bulgaria’s commitment to Nato and the west. “We are on the right side of Nato and EU policies, 100 per cent,” he told the Financial Times in an interview before he was confirmed as prime minister.

“We will propose a new process [on North Macedonia], very fast, with a limited timeframe, just six months long,” he said.

Sofia wanted certain issues to remain on the table, he noted, including both sides pledging to fight hate crime against the other and North Macedonia referring to its historical connection to Bulgaria in its constitution. But he indicated compromise was possible. “Let the two populations start talking about the benefits of working together.,” he said. “Once we put the upsides on the table . . . discussions about compromises are much easier to have.”

The prime minister added: “Once this is all achieved . . . I believe we can happily sign Macedonia into the EU.”

The U-turn comes after Bulgaria last year vetoed its neighbour’s EU accession talks amid disputes over history and identity. Critics at the time accused Bulgaria’s former centre-right leader Boyko Borisov of resorting to nationalism to distract attention from months of protests against organised crime and corruption on his watch.

Borisov was ousted in April elections, but failure to agree a coalition led to fresh polls in July and again in November, when Petkov’s centrist We Continue the Change (PP) party won about a quarter of the vote.

We seek an active and committed role for Bulgaria both in the EU and in Nato. We no longer want to be the bad kid in the back of the classroom

The new government’s immediate challenge will be tackling the country’s coronavirus crisis. Bulgaria has among the world’s highest death rates and lowest vaccination rates.

“We have to increase vaccinations for sure,” said Petkov, whose party campaigned on a pledge to eradicate corruption and streamline the state. “We will put up a sufficient budget for promotion . . . I will invite experts, go to hospitals and show the situation. It is as much a health program as an economic program. We cannot close Bulgaria again.”

The incoming prime minister will also face a complex foreign policy balancing act at a time when Russia is playing an increasingly assertive role in the region.

Petkov told the FT the new government would put discussions with North Macedonia on a fresh footing. “We will use working groups . . . to hash out solutions on issues like joint economic activity, infrastructure, culture and history,” he said.

North Macedonia, which first called itself the Republic of Macedonia, emerged out of the former Yugoslavia and was granted EU candidate status in 2005. Its application was held up for years by Greek opposition to its original name, which Athens complained implied a territorial claim on the Greek region of the same name. The issue was resolved in 2019 when the qualifier “North” was added.

Meanwhile relations between Sofia and Skopje deteriorated, with many Bulgarians rejecting the concept of a separate Macedonian identity and language, and disputes over events dating back to the second world war.

However, Petkov faces a challenge in framing his government’s North Macedonia policy. The enigmatic ITN leader Trifonov has cultivated an image rooted in romantic nationalism — which in Bulgaria encompasses the claim that North Macedonia is ethnically and culturally Bulgarian. His party has nominated the coalition’s foreign minister and energy minister.

A recent Gallup International poll found fewer than 10 per cent of Bulgarians support North Macedonia’s EU aspirations outright, and more than 70 per cent back upholding Bulgaria’s veto on Skopje’s accession talks until the bilateral disagreements are settled.

Petkov said ITN was a constructive partner in coalition talks and that areas of concern discussed in recent months would remain on the table. “For example, in the Macedonian textbooks Bulgaria should not be called fascist,” he said, alluding to Macedonian descriptions of Bulgarian troops occupying — or in Bulgaria’s view, liberating and managing — what is today North Macedonia during the 1940s.

The prime minister aimed to win both sides round with sweeteners, including financial investment, infrastructure and cultural projects and a publicity push. “We are willing not just to talk the talk but also put some money on the table,” he said.

Sofia will also need to tread carefully at a time of intensifying tensions in the Black Sea region, where Russia is increasingly flexing its muscles following its 2014 annexation of Crimea from Ukraine.

Bulgaria wanted to end its dependence on Russian energy, Petkov said. The country obtains nearly all its natural gas from Russia. A pipeline running via Greece to Bulgaria that could carry alternative supplies has been under construction for over a decade.

Petkov noted Sofia had already signed contracts for supplies of Azeri gas via the Greek route and pledged to complete the Bulgarian part of the work as soon as possible.

Petkov said his foreign policy would focus on averting armed conflict “anywhere in the neighbourhood” but that the country remained anchored in the west.

A comment by his political mentor, President Rumen Radev, during an election debate in November — when Radev sparked concern among international allies by saying “Crimea is . . . currently Russian” — had not signalled a change in Bulgaria’s stance, Petkov argued. The president merely meant to call attention to the reality on the ground, he said.

“We are treating Crimea as part of Ukraine, there is no doubt about that,” Petkov insisted. “But we want to make sure to use all diplomatic means to avoid military conflict.

“We seek an active and committed role for Bulgaria both in the EU and in Nato,” he added. “We no longer want to be the bad kid in the back of the classroom.”

Updated to include additional quotes from Kiril Petkov.