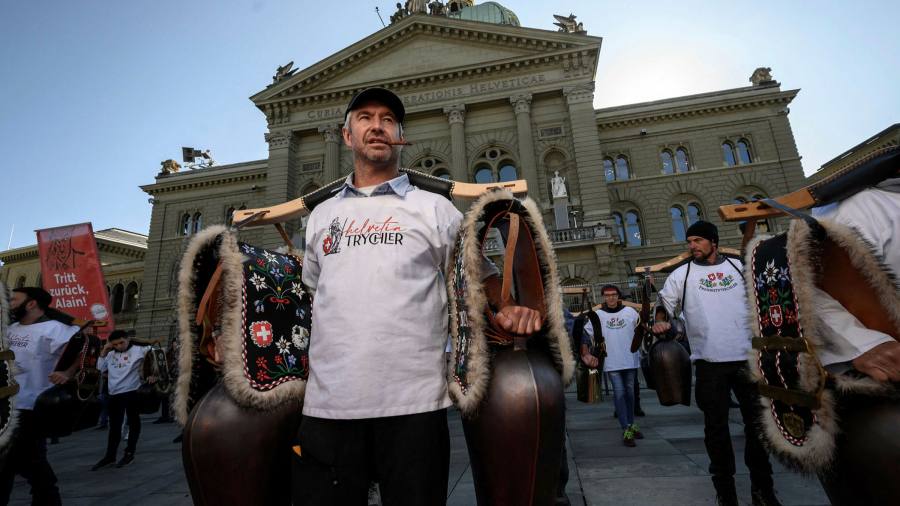 As Switzerland kicked off a mass Covid-19 vaccination drive, riot police formed lines around Zurich’s main train station. Their mission: to protect a new “vaccination village” in the station hall from angry protesters.

“We are a civil rights movement,” said Nicolas A Rimoldi, a 26-year-old protester from the city of Lucerne who was one of several people arrested during the Monday protests but later released without charge. “The huge pressure that is being put on people, against morality, against the constitution, is just not right.”

Some protesters carried Trycheln, the giant cowbells that are a symbol of rural Switzerland, where vaccine hesitancy is high.

Despite being one of the wealthiest countries in the world, Switzerland has the lowest Covid-19 vaccination rate in western Europe. More than one-third of the Swiss population — 33.6 per cent — have not had a first dose of a Covid vaccine.

Switzerland is part of a cluster of wealthy — and predominantly German-speaking — European nations at the heart of Europe with surprisingly poor vaccination rates. In neighbouring Austria, 33.1 per cent have yet to take a single shot of the vaccine, and in Germany it is 30.4 per cent. Case numbers are surging in all three countries.

The high levels of hesitancy, evident among adults of all age groups and political persuasions, have increased scrutiny of the factors driving vaccine scepticism in German-speaking countries.

In Germany, resistance to the vaccine is marked in the affluent southern states of Bavaria and Baden-Württemberg as well as in eastern regions such as Saxony. Markus Söder, the Bavarian prime minister, said the three regions had a large proportion of Querdenker (“lateral thinkers”) — members of a protest movement that form the loudest voice against the government’s pandemic curbs.

“We have two viruses in the country,” Söder told a German talk-show. “We have coronavirus and we have this poison [of vaccine scepticism], which is being spread on a massive scale by the Querdenker and by parties like the [far-right] Alternative for Germany [AfD]”.

In Switzerland, vaccine uptake in rural, German-speaking eastern cantons is often far lower than in the country’s French-speaking west and Italian-speaking south. In Appenzell Innerrhoden, 45 per cent of the population is still completely unvaccinated. But the pattern is not clear-cut. The mountainous, German-speaking canton of Graubünden has administered more first doses than urban, French-speaking Geneva.

Suzanne Suggs, professor of communication at the University of Lugano’s public health institute, suggests that authorities in German-speaking countries have tended to be far more dispassionate in their health messaging. “It has been functional rather than emotional,” she said. The lack of emotionally resonant pro-vaccine messaging “has meant conspiracy theories have filled that void — they are often easier for [uninformed] people to believe”, Suggs added.

Daily cases in Austria and Germany hit their highest levels of the entire pandemic on Tuesday. The province of Upper Austria — a centre of vaccine scepticism, with a population of 1.5m — has recorded more new coronavirus cases this week than the whole of the Iberian peninsula.

In Germany, 14m people who are eligible to receive the jab have so far decided not to. In the Berlin suburb of Hohenschönhausen, locals queueing for injections at a pop-up “vaccination bus” gave a range of reasons for having waited.

“I am generally a champion of vaccination, but I’m just not sure that this one is safe,” said Jutta, who declined to give her surname. She said she was still opposed to the Covid vaccine, “but I have no choice any more. They’re saying I won’t be able to go to work unless I’ve received the jab.”

Polling by Erfurt University gives some indication why many Germans don’t want jabs: 80 per cent of unvaccinated respondents said they needed to weigh up the risks and benefits first, and 41 per cent simply considered vaccination “unnecessary”.

Anti-vaccine sentiment intersects strongly with anti-establishment and populist politics. A Forsa poll conducted on behalf of the German health ministry found that half of unvaccinated respondents had voted for the rightwing populist AfD in the recent federal election.

In Austria, the rightwing populist Freedom party has become vociferous in its opposition to vaccination measures. Last month party boss Herbert Kickl spoke about “terrifying” links between vaccines and tumours.

Switzerland is gearing up for a November 28 referendum that will codify the federal government’s emergency pandemic powers. The populist Swiss People’s party — the country’s largest — is openly campaigning against the government. According to an October poll by Sotomo, 51 per cent of its supporters are unvaccinated.

While it has become convenient for the German-speaking political mainstream to deride vaccine-sceptics as Schwurbler — which loosely translates in this context as “burbling yokels” — the reality is more complex.

Many young people in the three countries are also opposed to Covid-19 vaccination — and government measures to encourage it. In Austria, around 37 per cent of adults under the age of 35 are unvaccinated.

The average age of supporters of the Mass-Voll! (“Enough is Enough”) protest group that organised Monday’s demonstration in Zurich is just 20. It already has more followers on Instagram than the youth movement of Switzerland’s Green party or its Social Democrats.

“This is about the future of a younger generation,” said Rimoldi.