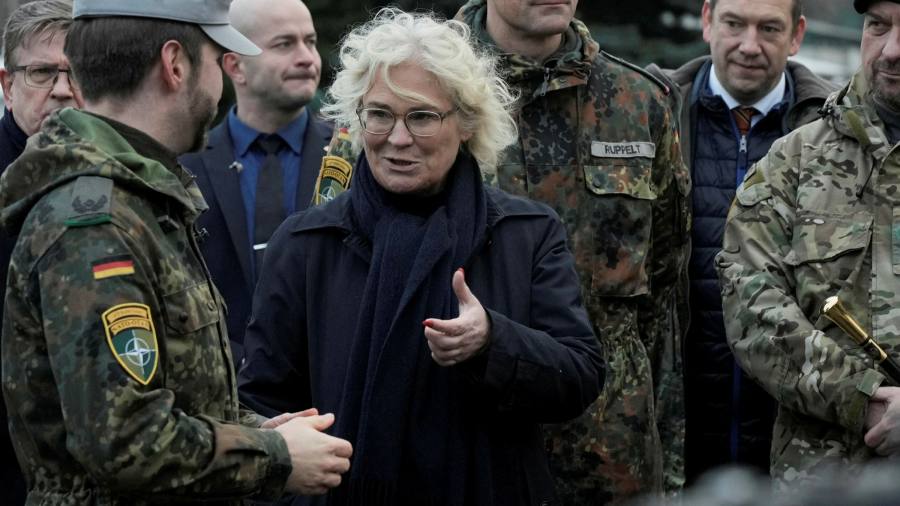 Nato allies are resigned to the need to negotiate with Russia despite the impossibility of many of Moscow’s demands regarding the US-led alliance in Europe, as pressure mounts to find a diplomatic solution to rising military tension over Ukraine.

Western defence officials want to avoid an outright rejection of the Kremlin’s proposals in an attempt to find areas of mutual agreement and calm a situation in which more than 100,000 Russian troops have assembled on Kyiv’s border.

Russia laid out its “red lines” to Nato and the US last week, which included forthright demands for the western alliance to deny membership to Ukraine, seek consent from Moscow to deploy troops in former communist countries in Europe and avoid military deployments or exercises close to Russia’s borders.

Western officials have in private rejected almost all of the demands as implausible, not credible and in contradiction to post-cold war treaties guaranteeing sovereign states’ rights to choose their defence policies.

But they admit that closing the door on Moscow’s initial diplomatic offer could make the situation worse. They think the proposals are a chance for dialogue alongside threats of sanctions should Moscow take steps to endanger Ukraine.

“We need to solve the current tensions on the diplomatic level,” Germany’s new defence minister Christine Lambrecht said on Sunday on a visit to German troops stationed in Lithuania — troops that Russia would like to see removed. “We will discuss Russia’s proposals . . . But it cannot be that Russia dictates to Nato partners their posture, and that is something that we will make very clear.”

The North Atlantic Council, Nato’s decision-making body, said in response to the demands that it was “ready for meaningful dialogue with Russia . . . on the basis of reciprocity”.

Convincing Russia to reverse its military build-up on the border with Ukraine — which US intelligence has warned could be used to invade — is Nato’s primary objective.

But with the alliance ruling out any concessions that would affect its members’ security or the sovereignty of Ukraine, officials say it will be difficult to find areas where detailed negotiations could be possible.

“The problem here is that if you just say no [to Moscow’s demands], then you have no space to talk,” said a senior Nato diplomat, who added that Nato and EU member states were talking about how to respond.

Officials told the Financial Times there was no consensus as to how negotiations would take place or who would be involved.

Larger formats, such as the Nato-Russia Council or the Organization for Security and Co-operation in Europe (OSCE), allow for a wide range of views to be aired and avoid the perception of larger countries discussing the implications for smaller ones. But a more selective negotiation format may be necessary to discuss details and achieve results.

Western diplomats do not want to allow Russia to set the terms of any engagement, so negotiations will only begin after Nato and the US have agreed their own proposals for Moscow.

“We will discuss these proposals that are currently on the table . . . with all our partners in the EU and in Nato,” said Andrea Sasse, spokeswoman for the German foreign ministry. “It is important that in our dialogue that we have [with Russia] at the moment, we remain true to our own principles. And one of them is the indivisibility of the security of all Nato member states. And that has consequences for what we can and can’t accept.”

Defence ministers of the Nordic and Baltic states have uniformly rejected Russia’s demands, according to a statement on Monday.

Estonian minister of defence Kalle Laanet said: “We see Russia’s aggressive stance only deepening and a further escalation of the situation is a serious threat to the security of Ukraine, but also to the whole of Europe. It is vital for our region and all allies to have a unified situational awareness and strong co-operation, which is why we will discuss the situation today and in the coming days within various formats.”

Sergei Ryabkov, Russia’s deputy foreign minister, who outlined Russia’s demands on Friday, said on Monday that Moscow had so far received no response from the US.

“I think they’ll try to turn this into a slow-moving process, but we need it to be urgent, because the situation is very difficult, it is acute, it tends to become more complicated,” he was quoted by state newswire RIA as saying.

Sullivan indicated US readiness to engage in diplomacy through multiple channels, including bilateral engagement, the Nato-Russia Council and the OSCE.

He said that any dialogue would have to be based on reciprocity and address the US’s concerns about Russia’s actions, and take place in full co-ordination with the US’s European allies and partners.