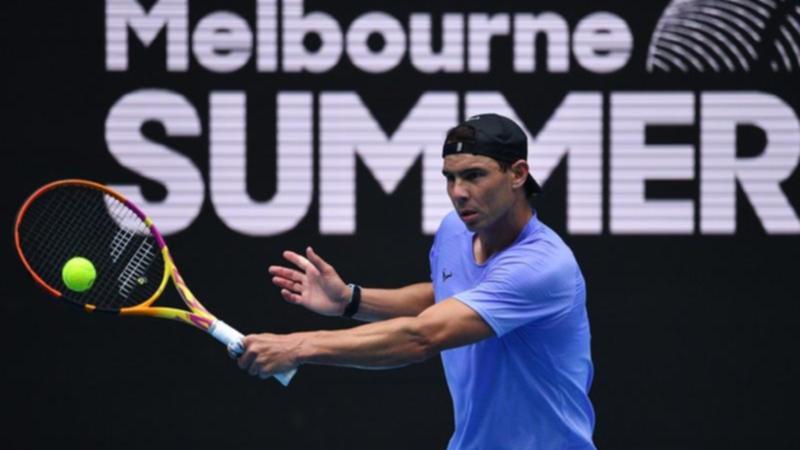 Rafael Nadal’s quest for a 21st grand slam title has begun on court with rival Novak Djokovic in court fighting to join him at the Australian Open.

The Spaniard on Thursday enjoyed a low-key return to Melbourne Park after a first-round bye, beating Ricardas Berankis 6-2 7-5 to move into the final eight at the Melbourne Summer Set.

His match played out as Djokovic’s legal team argued in the Federal Court to overturn the Serbia star’s deportation that sensationally came despite the unvaccinated world No.1 initially receiving a medical exemption to compete.

Like Djokovic and Roger Federer, Nadal is stranded on a record 20 majors – his last triumph coming at the French Open in 2020.

A lone Australian Open title in 2009 has been followed by four losses in the final, while he’s reached the quarter-finals in his last two visits to Melbourne Park.

But with Federer (knee) a no-show and Djokovic embroiled in an exemption mess, he’s set to be the only member of the famed trio in a position to move clear later this month.

The 35-year-old’s presence in Australia was initially clouded too, Nadal testing positive to COVID-19 after his injury return in December.

But he showed no signs of sluggishness on Rod Laver Arena on Thursday, largely untroubled against Lithuania’s world No.104.

There were a few speed bumps though, Nadal broken early in the second set and again as he attempted to serve out the match.

That rally proved to be false hope for Berankis, who was broken to love when attempting to force a second-set tiebreak.

Nadal will play the winner of Australian Alexei Popyrin and Tallon Griekspoor in the next round.