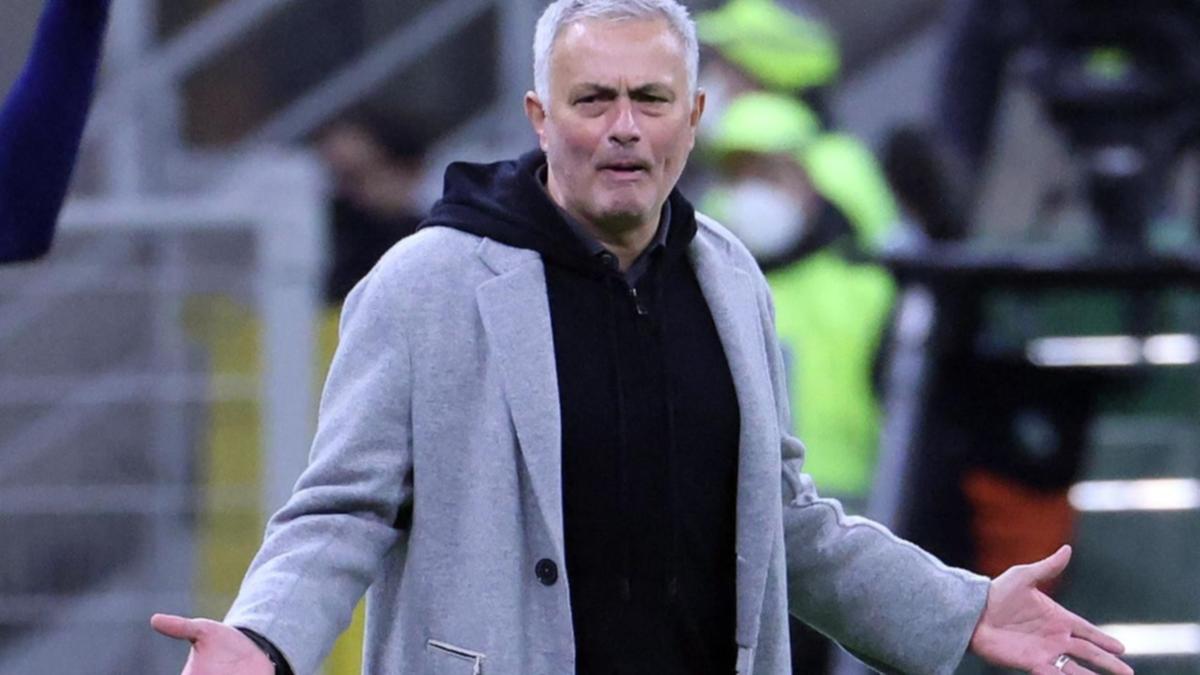 Jose Mourinho cut a frustrated figure after seeing two of his Roma players sent off and watching a couple of major errors that handed AC Milan a 3-1 win in Serie A.

The Roma boss gesticulated unhappily after striker Tammy Abraham stuck out his arm to block a shot in Thursday’s match that resulted in a penalty for Milan.

Then defender Roger Ibanez made an errant back pass that was intercepted by Olivier Giroud and led to the Rossoneri’s second goal just 17 minutes in.

Giroud converted the penalty and Junior Messias scored Milan’s second on a rebound after Giroud’s effort hit the post.

Abraham then pulled one back for Roma with a deflection but Milan goalkeeper Mike Maignan maintained the Rossoneri’s advantage with a series of fine saves.

Milan also hit the woodwork twice while Roma finished with nine men when Rick Karsdorp and Gianluca Mancini each picked up their second yellow cards, which means they’ll be suspended for Sunday’s game against Juventus.

With Roma down to 10 men, Rafael Leao restored Milan’s two-goal advantage after being set up with a chested pass from fellow substitute Zlatan Ibrahimovic to sprint in alone toward goal.

Ibrahimovic then had a penalty attempt saved by Rui Patricio.

The match at the San Siro was one of only six of 10 matches that was played following a two-week break, with four games scrapped because of rising coronavirus cases.

Milan moved within one point of Serie A leaders Inter Milan, whose game at Bologna was among those postponed after the hosts were ordered into quarantine.

The other games affected were Atalanta-Torino, Salernitana-Venezia and Fiorentina vs Udinese.

Hellas Verona won 2-1 at relegation-threatened Spezia despite missing eight players who had tested positive for the virus.

Gianluca Caprari scored twice for Verona before Martin Erlic pulled one back for Spezia. The result could cost Spezia coach Thiago Motta his job.

Also, Sergej Milinkovic-Savic scored twice, including a stoppage-time equaliser, for Lazio in a 3-3 draw with Empoli.

Ciro Immobile opened the scoring for Lazio with his 14th of the season but also had a late penalty kick saved.

Cagliari earned their second win of the season by beating Sampdoria 2-1 with goals from Alessandro Deiola and Leonardo Pavoletti.