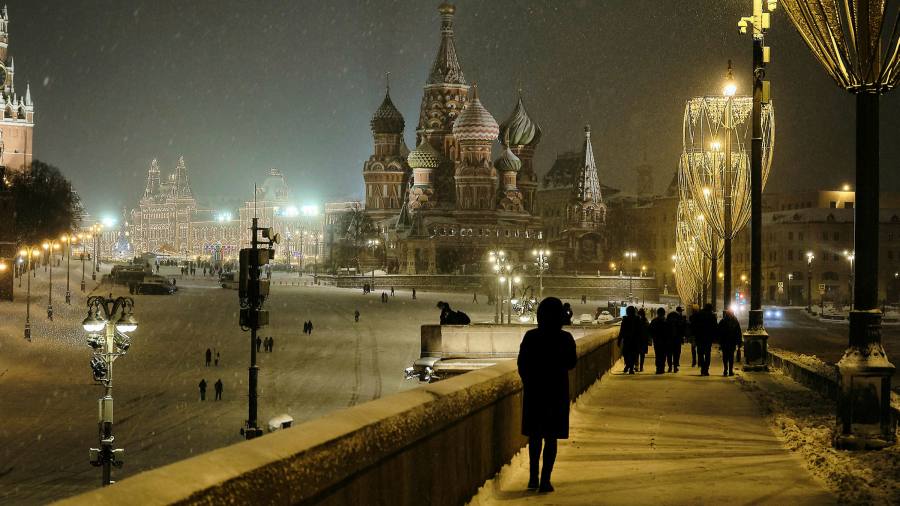 With up to 175,000 Russian troops massed on the Ukrainian border and Vladimir Putin warning the west not to cross his “red lines”, there’s talk of war again in Moscow. But you wouldn’t know it from my Instagram feed, which is full of selfies from flashy oligarch-funded art centres: Kremlin-connected gas magnate Leonid Mikhelson has just opened GES-2, an enormous new “house of culture”, while Putin’s inconveniently timed video summit with Joe Biden the other week meant that I had to flog my tickets to see London avant-jazz band Sons of Kemet in Garage, the museum funded by Chelsea FC owner Roman Abramovich.

A decade or so ago, when I wrote art reviews for The Moscow Times expat newspaper as a student, Russia’s contemporary scene could have only dreamt of something like GES-2, then a decaying century-old relic. Like Tate Modern, it occupies a former power station, which Italian architect Renzo Piano has bathed in light — or at least what little light there is in Moscow in December — with floor-to-ceiling windows and glass roofing like a greenhouse.

Mikhelson, one of Russia’s richest men, told Putin during a guided tour that he took it over in a “horrific” state. Now, at a price the taciturn billionaire has declined to name, it has turned into a showcase aimed to establish his V-A-C Foundation on a par with any cultural centre in Europe.

The artist charged with putting V-A-C on the map is Iceland’s Ragnar Kjartansson. He has made its centrepiece a “living sculpture”, with a team of 80 Russian actors, directors, and technicians re-enacting 98 episodes of the long-forgotten US soap opera Santa Barbara. Kjartansson is known for lengthy, repetitive performances such as a 2018 Moscow concert where, backed by a jazz band, he sang the phrase “Sorrow conquers happiness” in Russian over and over again for six hours.

For GES-2’s inaugural three-month run, he hit on the idea of Santa Barbara after reading an article in the journal Foreign Policy about the soap’s cult status in Russia. It was one of the first American shows allowed on Russian television following the collapse of the Soviet Union 30 years ago, and its glitz, glamour and bouffant hair-dos came to symbolise people’s yearning for a better life under capitalism. The show’s ritzy interiors, painstakingly recreated in GES-2, inspired interior decorating trends. Posh neighbourhoods in provincial backwaters were named after it — I’ve been to the Santa Barbara district on the hills overlooking Makhachkala in Dagestan, one of Russia’s poorest regions. And the show itself entered the Russian lexicon: “some kind of Santa Barbara” means an overly dramatic mess.

If anything, the throwback to Russia’s turbulent first few years after communism shows how much has changed in the ensuing three decades. Putin claimed last week that he had to work as a taxi driver in the 1990s to make ends meet; now it’s Russia’s oligarchs who are the byword for the somewhat tacky largesse embodied in Santa Barbara.

Russia’s artists, too, have had to adapt to suit their patrons’ taste — even if, on the evidence of GES-2, Mikhelson’s is better than most. Oleg Kulik, whose naked performances as a rabid dog epitomised the wild abandon of Russian culture in the 1990s, described the artist’s dilemma as “to bite or to lick”: whether to fight back against often oppressive masters or to seek approval from the institutions they controlled. (Kulik found himself on the receiving end of this dichotomy at a notorious exhibition in Stockholm where he snapped at visitors so aggressively, biting one man, that the police arrested him, as later immortalised in the 2017 Swedish film The Square.)

Well into Putin’s time in power, the biters still set the tone. The radical street-art group Voina was even awarded a state-funded prize in 2011 for spray-painting a phallus on a St Petersburg bridge — it boldly rose, erect, to face the local security services headquarters when barges passed. But when protests against Putin’s rule broke out that winter on Bolotnaya Square, just a few minutes’ walk from GES-2, the Kremlin launched a culture war that left little space for art beyond the tame.

Just across the river stands the Christ the Saviour cathedral, best known as the site of a protest by the punk art group Pussy Riot that landed two of its members in prison for “hooliganism”. The trendy Strelka bar-and-architectural-consultancy two blocks away masterminded an enormous attempt to win over Moscow’s hipsters in the mid-2010s by redesigning its streets: once completed, those expansive new sidewalks and blooming green spaces were where riot police violently broke up peaceful protests.

In a way, the tension between Moscow’s emergence in the last decade as a genuinely “liveable” city, with great coffee, more green spaces and a vibrant food scene, and the parallel deterioration of political freedoms was part of what makes it such a fascinating place to be a journalist. You can gossip about the latest murky moves from the Kremlin with a source in a swanky restaurant one day and then dodge cops beating people up with rubber batons outside it the next.

The stamping-out of dissent has made things a little too stark for my comfort. At least six people I’ve interviewed in my time here are in prison or were recently released

As of October, several Moscow restaurants now have Michelin stars — confirmation that Russia’s food scene is thriving after Putin banned most western imports in 2014 and spurred a burgeoning farm-to-table movement. Kremlin-connected types I meet drinking carob tea in coffee shops or smoking cigars in closed-door lounges constantly ask me about the “excesses” of Black Lives Matter and cancel culture in the west, but treat the way Russia’s security services are coming to permeate all corners of life as a mere inconvenience.

This year, though, the stamping-out of dissent since opposition leader Alexei Navalny’s arrest in January has made things a little too stark for my comfort. At least six people I’ve interviewed in my time here are either in prison or were recently released. Several Russian journalist friends have been named “foreign agents”, a restriction that makes working in public all but impossible. The rest scan the justice ministry’s website on what we know as “fucked-up Fridays” — the day they usually put out the latest list — to see if they’ve joined their ranks. Sources decline to meet for fear of sending the wrong “signal” by being spotted with a western reporter.

Most ominously, the apparatus of repression seems to have taken on a life of its own. “Why do trees grow in the woods? These things just happen,” a former official says over beers when asked who’s behind the crackdown. “It just so happens that Russia is a great place to live — if you’re a prosecutor, investigator or intelligence officer. That wasn’t Putin’s plan, but that’s how it happened.”

As Putin’s warnings over Ukraine grow more ominous, I have an impromptu lunch with one of Russia’s most seasoned culture warriors. Konstantin Malofeev funds an online news network, styled as a Russian Orthodox version of Fox News, that’s a bellwether for the conservative fringe; he’s been under US and EU sanctions since 2014 over his ties to the separatists in eastern Ukraine. His growing profile indicates the centrality of nationalists, family-values-style traditionalists and religious zealots to Putin’s culture war. An avowed imperialist, Malofeev even runs a movement to restore the tsar and has just published the first book in a three-volume opus tracing Russia’s imperial mission back to the earliest empires of Assyria.

With an office full of historical relics in a mall upstairs from a Michelin-starred restaurant and a rotating cast of priests on his channel, it’s easy to dismiss Malofeev as some sort of tsarist costume player. But the increasingly belligerent noises coming out of the Kremlin on Ukraine show he’s ahead of the curve. “Obviously, I support the harshest of all imperial scenarios,” he says over fish in cream sauce and roast cauliflower. “But we are completely prepared — this is the finest of sports, where we always win.”

Malofeev is convinced that once Russia drives Kyiv’s western backers from the country, Ukrainians will lay down their arms and embrace their “brotherly nation” once again as it subsumes them into his imperial project. I tell him this reminds me of the Bush administration’s conviction that Iraqis would “greet us as liberators” in 2003 — a disastrous imperial adventure from which US hegemony has yet to recover. But Malofeev is unfazed. And why should he be? Compare his vision to the western-influenced ideals on show at GES-2: it’s obvious who’s winning.