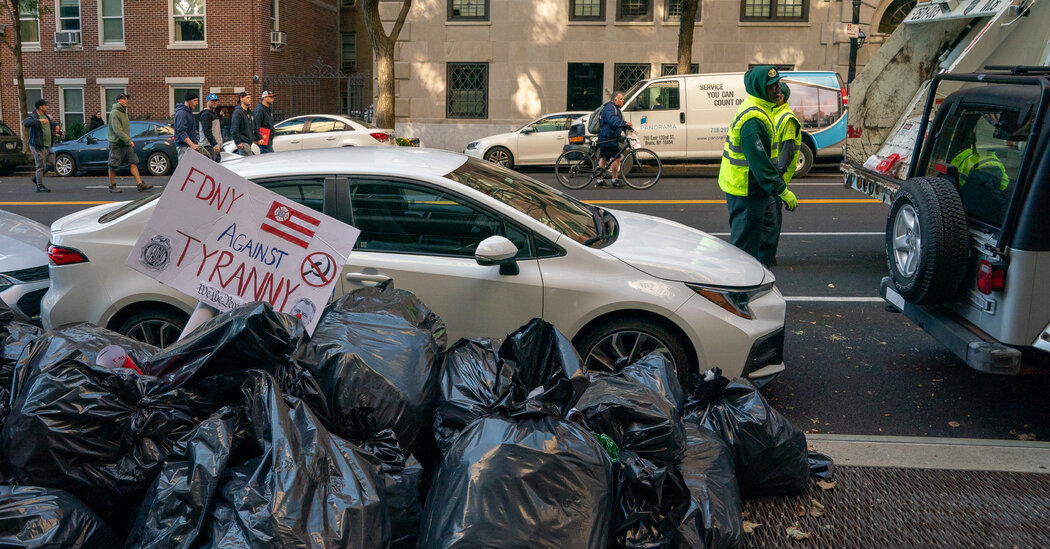 New York City’s sweeping effort to compel most city employees to receive the coronavirus vaccine before Monday appears to have rapidly boosted inoculation rates and pressured thousands of police officers, firefighters and other government workers who had long held out to get the shot.

The vaccination rate among workers affected by the city’s mandate rose to 83 percent at the end of Friday, from 71 percent on Oct. 19, the day before the requirement was announced, according to city data. Some individual agencies reported jumps in vaccination rates of nearly 10 percentage points between Thursday and Friday alone.

The last-minute rush in the nation’s largest municipal work force mirrored similar patterns involving other vaccine mandates. Thousands of health care workers around the state rushed to get their first doses in the days before a requirement for employees at hospitals and nursing homes took effect last month.

Still, more than 25,000 city workers affected by the mandate remain unvaccinated and will be placed on unpaid leave on Monday if they do not receive the shot over the weekend. And speculation was fueled in recent days that some employees in agencies including the Sanitation and Fire Departments had already begun to slow down work in protest of the mandate.

New Yorkers across several boroughs, for example, have reported garbage pileups and significant delays in trash pickups in their neighborhoods.

Sanitation officials say the most severe delays have been seen across Staten Island and in parts of southern Brooklyn including the Bay Ridge and Bensonhurst areas. Data shows that overall 311 complaints soared last week with more than 1,000 reports of uncollected trash and recycling on some days, as the local news outlet Gothamist reported. (The number had hovered between 100 and 250 through the rest of October.)

Mayor Bill de Blasio said this week that he believes some of the delays may be attributed to declines from workers in protest of the vaccination requirement.

“I’m assuming it is related to people expressing their views on this new mandate,” Mr. de Blasio said at a recent news conference. “You want a protest, go protest. But when you’re on the clock, you have to do your job.”

Similar problems were reported among some workers in other agencies as the vaccination deadline approached.

What to Know About Covid-19 Booster Shots

The F.D.A. has authorized booster shots for millions of recipients of the Pfizer-BioNTech, Moderna and Johnson & Johnson vaccines. Pfizer and Moderna recipients who are eligible for a booster include people 65 and older, and younger adults at high risk of severe Covid-19 because of medical conditions or where they work. Eligible Pfizer and Moderna recipients can get a booster at least six months after their second dose. All Johnson & Johnson recipients will be eligible for a second shot at least two months after the first.

Yes. The F.D.A. has updated its authorizations to allow medical providers to boost people with a different vaccine than the one they initially received, a strategy known as “mix and match.” Whether you received Moderna, Johnson & Johnson or Pfizer-BioNTech, you may receive a booster of any other vaccine. Regulators have not recommended any one vaccine over another as a booster. They have also remained silent on whether it is preferable to stick with the same vaccine when possible.

The C.D.C. has said the conditions that qualify a person for a booster shot include: hypertension and heart disease; diabetes or obesity; cancer or blood disorders; weakened immune system; chronic lung, kidney or liver disease; dementia and certain disabilities. Pregnant women and current and former smokers are also eligible.

Yes. The C.D.C. says the Covid vaccine may be administered without regard to the timing of other vaccines, and many pharmacy sites are allowing people to schedule a flu shot at the same time as a booster dose.

Fire officials said that an uptick in sick calls among employees toward the end of the week was responsible for the temporary closures of several fire stations across the Bronx and other boroughs.

“The excessive sick leave by a group of our firefighters because of their anger at the vaccine mandate for all city employees is unacceptable, contrary to their oaths to serve and may endanger the lives of New Yorkers,” the fire commissioner, Daniel A. Nigro, said in a statement.

Union leaders for both fire and sanitation workers denied reports of the changes in work patterns.

Still, the overall rise in the vaccination rate for municipal workers offered a measure of optimism that significant disruptions to government agencies and city life could be avoided as enforcement of the mandate begins on Monday.

Before the requirement was announced on Oct. 20, and an option to opt into weekly testing was removed, only about 60 percent of employees in the Fire and Sanitation Departments had received at least one vaccine dose. The Police Department’s rate sat around 70 percent.

Holdout workers were offered $500 as a bonus if they got vaccinated by the end of the workday on Friday. By that deadline, more than 75 percent of fire and sanitation workers had been vaccinated — along with nearly 85 percent of the Police Department’s 36,000 uniformed and 15,000 civilian employees.