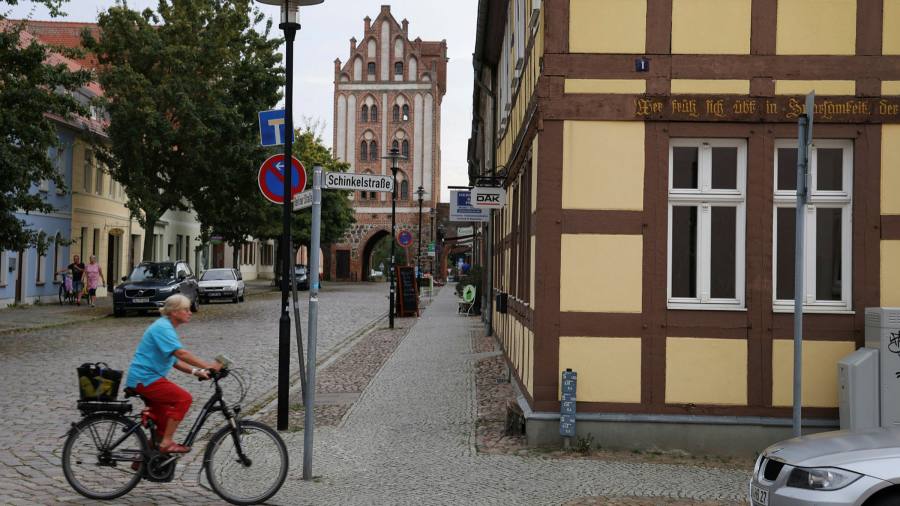 In one of her final speeches as chancellor Angela Merkel did something she had almost never done in her 16 years in office: she talked about herself, and her East German past.

Merkel was hurt by an essay recently published about her Christian Democratic Union party, which described her history as “ballast”. Quoting from a dictionary, the chancellor said ballast was cargo used for balance then discarded.

“A personal life story of, in my case, 35 years of state dictatorship and repression — ballast?” she asked on the October anniversary of German reunification.

“I say this as a citizen of the east . . . who went into German unity with this life story, and who continue to experience such evaluations — as if their life before German unity didn’t really count.”

It was a subject Merkel long avoided in public. She is the first chancellor to come from communist East Germany, a past that weighs on those who grew up in it.

Three decades since the fall of the Berlin Wall, east-west divisions still resonate — particularly for former citizens of East Germany, who feel Merkel never promoted their history, nor worked to heal the divide still felt with the west of the country.

Many Ossis — the informal name for people from the former East — say her economic and migration policies exacerbated schisms, which created fertile ground for far-right populism.

And despite Merkel’s own status as one of the world’s most powerful democratic leaders, many easterners feel Wessis continue to dominate their reunited nation.

Eastern Germans still earn less, and work more. According to a study by the Allensbach Institute, 40 per cent see themselves as “East German” rather than “German.”

“She was a bit late,” joked Erika Benn, 83, who was Merkel’s Russian coach for school district language competitions.

The white-haired, bespectacled teacher — a staunch leftist — never voted for Merkel but now appreciates that “she has realised she has to talk about her life here”.

Today, Templin gets as many visitors curious about the aloof chancellor as about its medieval walls. Unlike much of eastern Germany, emptied by economic westward migration, the town has flourished as a retreat for nearby Berliners, who in summer flock to the picturesque town and its nearby lakes.

Although she was born in Hamburg, West Germany, Merkel’s family was moved east by her father, Horst Kasner, a left-leaning pastor. The future chancellor grew up in a green, two-storey house at Waldhof, a Protestant seminary, nestled among trees and rolling pastures.

Merkel’s childhood was a privilege and a burden, said Wolfgang Seyfried, a retired Waldhof director who knew the family. Many priests were regarded as potential western spies. But they enjoyed material advantages, with West German churches sending supplies from washing machines to cars.

“It was not only an East German upbringing, but a unique one, easy to stigmatise,” Seyfried said. “That becomes who you are for life, for better and for worse.”

Merkel’s relative silence on her past might have been a missed opportunity for healing divisions, but was also probably something she needed to maintain, said Hans Vorländer, of the Technical University at Dresden. “She did not politicise it, because it could have been used to mobilise against her,” he said.

Behind the scenes, he said, Merkel did more for fellow East Germans than she gets credit for. Her government’s decision to spend billions of euros to subsidise the closure of mines was, Vorländer said, probably done for the sake of East German coal miners who would soon be jobless.

“A lot, a lot of money has been transferred from west to east German states,” he said. “She has always had the interests of eastern Germany in mind.”

Yet traumas linger from long before Merkel’s time as chancellor. Eastern Germany suffered in the 1990s from deindustrialisation, when western companies shut down countless eastern factories and thousands lost their jobs. The migration of younger, skilled East Germans has left small towns empty until today.

The far-right Alternative for Germany (AfD) tapped into that anger, developing a strong following in the east.

A decision by Merkel — which SPD politician Sigmar Gabriel has described as being motivated by her East German experience and Christian values — deepened that faultline. Her acceptance of nearly 1m mostly Syrian refugees in 2015 sparked a popular backlash, used by the AfD to enter the Bundestag. It was the first far-right party to do so since the second world war.

“All of a sudden they were just shouting: Stop now, Merkel! Away with Merkel!” Vorländer recalled. “The strength of the AfD can be explained by the fact it has taken up this anti-Merkel substance.”

In September’s elections, the AfD became the strongest party in the eastern states of Saxony and Thuringia.

One of Merkel’s greatest contributions, some Templiners said, may instead have been to Wessis — by changing the conservative treatment of women. (Her political mentor, Helmut Kohl, called Merkel his Mädchen, or girl.)

“[East German] women had the same rights, the same pay, the same opportunities to advance. So women raised in the east were more self-confident,” he said. “She never thought: I’m a woman, I have to get in line.”

At Thursday’s military ceremony to bid her farewell, Merkel nodded to her roots with a request that the band play an East German punk rock song, Du hast den Farbfilm vergessen — “You forgot the colour film.”

A veiled critique of the drabness of East German life, its famous chorus is: “No one will believe how beautiful it was here.”