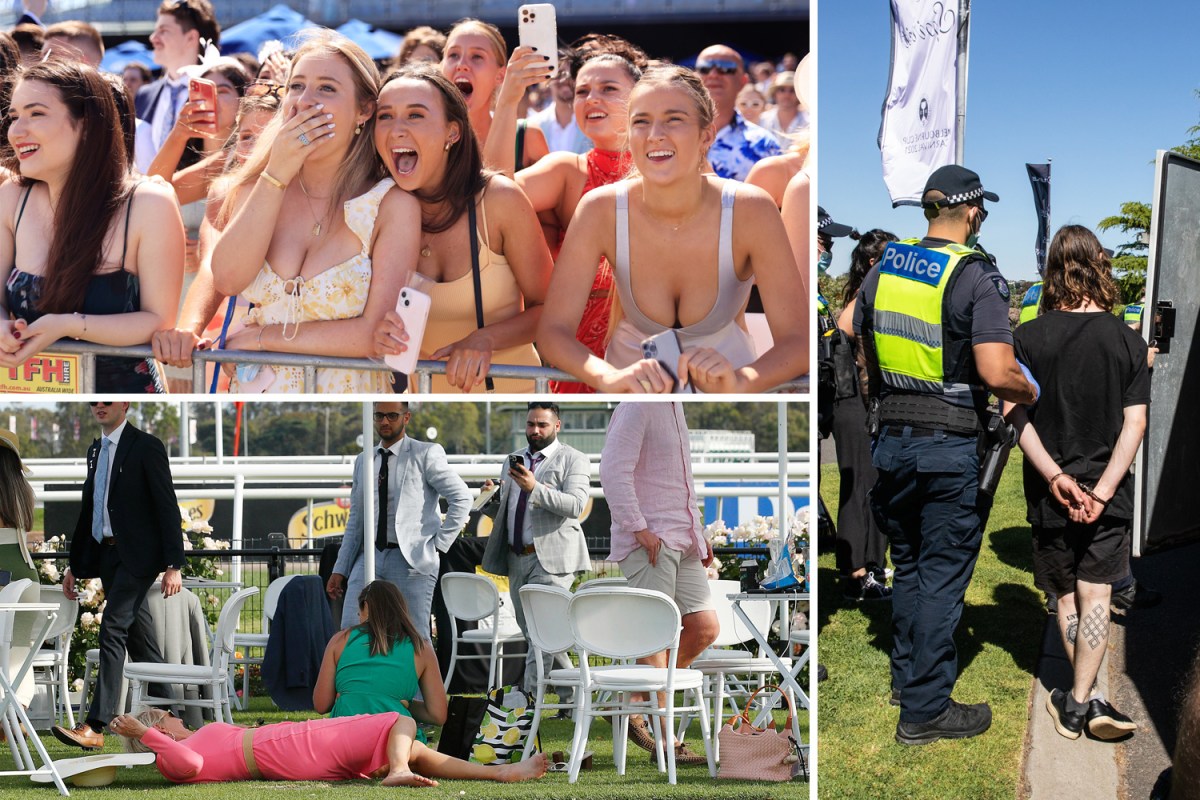 MELBOURNE CUP punters soaked up the sunshine and the booze – as nine people were arrested at the ‘race that stops a nation’.

Verry Elleegant was the shock 16-1 winner of the £2.6million first-place prize, seeing off red-hot favourite Incentivise.

But it looked like some of these fun-loving racegoers would do well to remember who past the post first after a brilliant day out at Flemington racecourse in Melbourne, Australia.

Some 10,000 punters flocked to the course as Covid restrictions lifted just in time to allow racing fans a proper day out.

And they saw it out in ultimate style, mixing (some questionable) fashion with flowing drinks, lots of laughter and just as many bets.

But the annual bonanza – part of the week-long Melbourne Spring Racing Carnival – always attracts anti-racing advocates and a number of them made themselves known with a Squid Game-inspired protest.

Pictures showed some protestors being hurled away by cops, with nine arrests made in all after some stormed the entrance before quickly being detained.

There was no such drama inside the track, though, with punters more concerned with taking in some top class racing and having a good time.

The drinks flowed, despite the attendance being down from the 90,000 figure usually touted for Melbourne Cup day.

And this year’s crowd had a different make-up, with only five per cent of tickets going to the general public.

The rest went to Victoria Racing Club members as well as owners, corporate sponsors and trainers.

Ireland’s Joseph O’Brien, a two-time winner of the race, was one of those to make a last-minute flight across the world to watch his horse Twilight Payment run.

But last year’s winner could manage only 11th spot at odds of 12-1.

Those who didn’t get a ticket watched the action from around the country, with some racing fans in Sydney following all the action on a big screen.

Punters at the track had to be fully vaccinated and they were separated into three zones which they were not allowed to leave.

That did not stop them knocking back some liquid refreshment, though, with brilliant photos showing racegoers celebrating and having a good time.

However it looked like it all got a bit much for one after she was pictured lying flat on the floor.

Fortunately there looked to be no repeat of some of the drunken violence of previous years, with fans behaving themselves amid the big police presence.

Commercial content notice: Taking one of the bookmaker offers featured in this article may result in a payment to The Sun. 18+. T&Cs apply. Begambleaware.org

A responsible gambler is someone who: