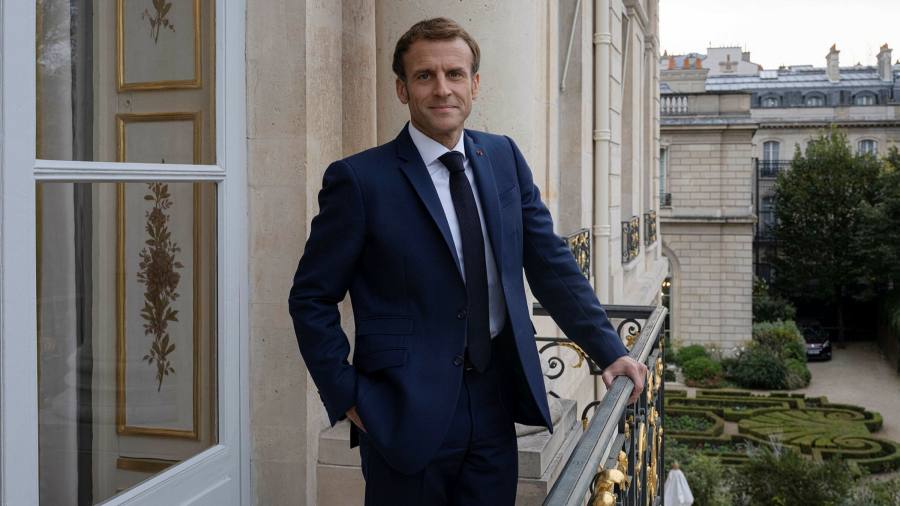 President Emmanuel Macron has warned that an energy crisis threatens the world’s post-pandemic recovery, calling for leaders at a G20 summit in Rome this weekend to work together to stabilise supplies.

In an interview, the French president also urged bigger financial commitments towards the fight against global warming on the eve of the COP26 climate summit in Scotland, and for particular attention to be paid to a deal to phase out coal power.

The G20 needed to co-ordinate between energy producers and consuming countries to prevent a supply breakdown this winter, which risked “extreme tensions both economically and socially”, Macron said.

“In the coming weeks and months, we need to get better visibility and stability on prices so tension on the energy prices doesn’t generate uncertainties, and undermine the global economic recovery, ” he told the Financial Times in the Elysée Palace. “What we expect is to have co-ordination to avoid soaring prices.”

Global energy costs have surged this year, disrupting industry and hitting consumers with higher prices. Eurozone inflation surged in October to a 13-year-high of 4.1 per cent, according to a flash estimate published by the EU’s statistics arm on Friday.

“I don’t think we’re going to be able to lower prices given tensions on the demand side,” Macron said. “But what we need to avoid is to have a break in supply [and further] increases in prices, particularly as we’re moving into the winter period for the northern hemisphere.”

Rapid economic recovery from the pandemic has pushed up energy prices “almost too rapidly” which risked “weighing on economic growth and putting a burden on households”, Macron said.

France and a number of other EU governments have sought to protect consumers and businesses with billions in aid and price freezes.

Asked whether he blamed high European energy prices on Russia, Macron said: “I have no evidence that there’s been manipulation of prices and I’m not accusing anybody. These are trading relations. They shouldn’t be used for geopolitical reasons.”

Asked about Gazprom’s power over Europe, Macron said: “It’s not a matter of whether we’re too dependent on a company or not, it’s how do we create alternatives. And the only alternatives are to have European renewables and of course, European nuclear.”

France is the EU’s biggest user of nuclear power, contrasting with a move away from atomic power by Germany and some other countries.

Macron called for Europe to develop a more diverse gas supply but also to speed up a transition away from fossil fuels, which will be necessary to slow rising temperatures and tame the climate disruptions caused by global warming.

“What is happening now is ironic, because we are building a system where in the medium and long term fossil energy will cost more and more, that’s what we want [to fight climate change],” he said. “The problem is that industries and households will need to be accompanied in this transition . . . or it won’t be sustainable.”

The French president, who is facing national elections in April, has been a vocal advocate of multilateralism. He has pushed for more co-operation globally and at EU level to reach deals on issues including international taxation and global warming.

Against a backdrop of global tensions, a supply chain crisis and the Covid-19 pandemic, Macron said the G20 had a responsibility to work together, especially to help low-income countries. He urged leaders at the Rome summit to agree a plan for faster vaccine delivery to developing countries.

“France has always stressed the importance of maintaining multilateralism, but we have to get concrete results from it,” he said.

The leaders of China, Russia and Japan will not attend the summit in Rome in person this weekend because of Covid-19 concerns and an election in Japan.

Macron said the G20 meeting, which is being hosted by Italian leader Mario Draghi on the eve of COP26, would also give countries a chance to hammer out more ambitious plans to fight climate change.

“When we’ll be meeting in Rome, the major challenge is to ensure that members of G20 can usefully contribute in Glasgow, to making this COP26 a success,” he said. “Nothing can be taken for granted before a COP,” he added.

“The first subject for the G20 is to accelerate the exit from coal power,” he said. G20 leaders expect a heated debate this weekend over including a pledge to end international coal financing.

“We need the G20 to go right through to the eradication of all international financing of coal-fired power plants,” Macron said.

Macron also called for rich countries, particularly the US, to commit more financially to help developing countries meet their climate goals. And he called on China to bring forward the date at which it will peak emissions, from 2030, to 2025.

“So as not to lose more time, we have to do as much as is absolutely possible in terms of financing, and encourage the US administration so that they can convince Congress to front-load its financing.”

Another issue will be to hold countries to their emissions targets for 2030 and 2050. “Our objective is to get maximum results from all countries,” he said. “This pathway is possible, even if it’s a challenge, especially for emerging countries which at the same time are trying to recover from the Covid crisis.”

Macron also urged the G20 leaders to do more to help vaccinate the world against Covid-19. The group should end vaccine export bans, increase its donations of vaccine doses, and support vaccine production in Africa, he said.

“Every French person has given one vaccine to somebody else in the world,” he said, referring to the roughly 60m doses that were on the way to Covax, the World Health Organisation’s procurement scheme for low-income countries. “If everybody in the G20 could do that we would get to the 20 per cent of the population vaccinated. This is vital,” he said.