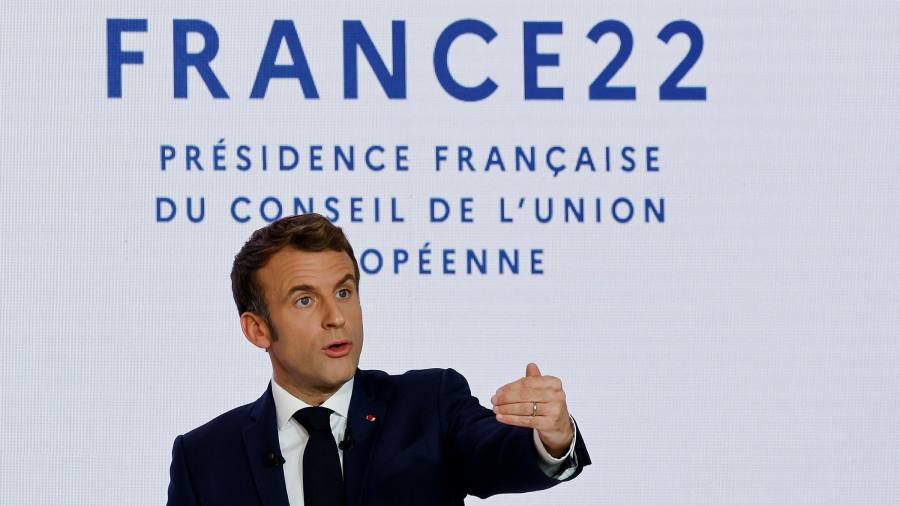 Bonjour and welcome to Europe Express.

Emmanuel Macron is known for his elaborate news conferences. And yesterday’s presentation of the upcoming French EU presidency certainly did not disappoint, featuring lengthy discourses about European sovereignty and the need to update the bloc’s fiscal rules.

I’ll unpack the most notable ideas and how feasible his ambitions are. (In case you were wondering, yes, France’s president is still upset about the US-UK-Australia defence pact that sunk his submarine deal. On Brexit, he wants a government in London that would co-operate “in good faith” with Paris.)

Speaking of Brexit, another regular EU-UK meeting is taking place today, but progress is likely to come from outside the Sefcovic-Frost dialogue format. We’ll explore why and when the EU is likely to change is rules to allow for UK medicines to be sold in Northern Ireland.

And in digital regulation news (also a priority pour la France), some last-minute tweaks to the Digital Markets Act are aimed at hardening the European parliament’s position ahead of negotiations with member states and the European Commission.

President Emmanuel Macron sought to structure his presentation of the French priorities for the next six months into three broad “axes” — “Sovereign Europe”, a new “growth model” for Europe and a “human Europe” — although one could be forgiven for losing track of all the sub-points and tangents.

Here’s the FT story on it and below a more detailed rundown of what he said:

Should the Stability and Growth Pact allow investments to be excluded from a country’s deficit and debt calculations? Tell us what you think and click here to take the poll.

Today brings another round of post-Brexit talks between the EU and the UK. But while very little progress has been made in the (virtual) room since October, there is movement outside it, writes Andy Bounds in Brussels.

The European Commission will start legislating within days to change the rules on medicines to prevent an effective ban on many drugs in Northern Ireland, diplomats told Europe Express.

The region is supplied from Great Britain but remains in the single market so all medicines would need to comply with EU regulations once a grace period expires on January 1.

But British generic drugmakers have said the cost of doing so for a small market such as Northern Ireland is not worth it so more than 2,000 products would become unavailable.

Maros Sefcovic, the Brexit commissioner, offered to solve the problem in his October package to deal with British complaints that there were too many impediments to trade across the Irish Sea.

While he hoped to get London’s approval, he has decided to act unilaterally anyhow — the commission does not want people dying for lack of drugs.

But there is another motive — Malta, a member state, suffers from the same problem, as does Cyprus to a lesser extent.

“Malta imports medicines from the UK because of the small size of our national market,” said an EU diplomat. “Pharmaceutical companies do not want the expense of regulation. Also the labelling must be in one of the EU official languages so it needs to be in English.

“It is facing the same supply issues as Northern Ireland.”

On the other aspects of the Northern Ireland Protocol that the UK has issues with, there is no sign of agreement.

The commission is discussing reductions to customs check and animal health controls, but not by enough to satisfy London.

Lord David Frost, the UK Brexit minister, is expected to repeat his threat to suspend the protocol by invoking its Article 16. But few believe that will happen before the new year.

The US and European capitals are in intense consultations over a sanctions package aimed at deterring Moscow from invading Ukraine, and which could include the Nord Stream 2 pipeline — if the German government agrees. The package will most likely be signed off by EU leaders at their summit in Brussels on Thursday. (More here)

EU lawmakers are pushing for last-minute amendments on the draft Digital Markets Act, ahead of a crucial vote next week, writes Javier Espinoza in Brussels.

Members of the European parliament have been for months engaged in lengthy debates over the scope of the regulation that would curb the alleged anti-competitive behaviour of online platforms (mostly American ones).

Even though a compromise had been reached among political parties last month, two committees are now tabling more changes aimed at making the future rules even tougher.

On Tuesday, Rasmus Andresen, a Green MEP in the committee for industry, research and energy, and his colleagues are pushing for a plenary vote on forcing WhatsApp, Twitter or Google to interact with each other. Currently this is not the case.

“Messenger services and social media platforms would be directly instructed to make their offerings interoperable. This is the only way to achieve a true opening of the markets in these areas,” Andresen said.

Earlier this week, Stéphanie Yon-Courtin, the MEP leading the debate in the economic and monetary affairs committee, tabled amendments to push for tougher scrutiny of so-called killer acquisitions led by Big Tech and on working more closely with national competition authorities to enforce the new laws.

“The DMA will not be sufficient to address killer acquisitions so we must recognise that the DMA and competition law are working hand in hand,” she said.

Expect more amendments from now until Wednesday, when the European parliament in Strasbourg votes on its common position, ahead of negotiations with the commission and member states on the final version of the law.