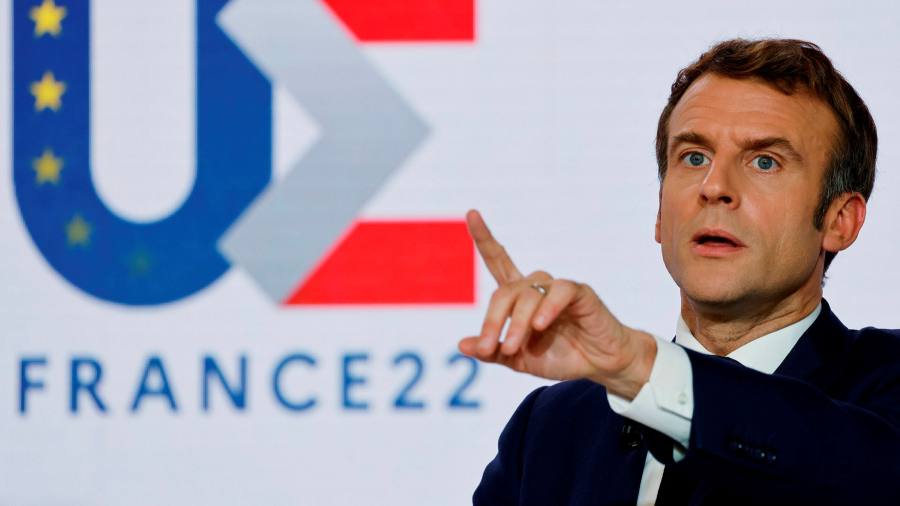 France’s President Emmanuel Macron has called for the EU to stand up for itself as a strategic and economic power in a crisis-ridden world by securing its external borders and controlling clandestine migration, deepening defence co-operation and investing in high-tech industries.

“We should move from a Europe of co-operation within our frontiers to a Europe powerful in the world, fully sovereign, free to make its own choices and master of its destiny,” he said at the Elysée Palace in Paris as he outlined his plans for France’s six-month presidency of the EU in the first half of next year.

Macron called for a reform of the 26-nation Schengen zone — within which people can circulate freely without border checks — and an improved emergency system to send security forces to guard external frontiers, such as those of Poland and Lithuania recently threatened with mass incursions by migrants at the instigation of Belarus.

He said Schengen procedures should be managed like the eurozone with regular ministerial meetings to ensure “a coherent policy for controlling our external frontiers”.

In a low-key reprise of the ambitious European initiatives he announced at the Sorbonne University soon after being elected president in 2017, Macron called for deeper defence co-operation in the EU and a European economic “growth model” based on investment in high-tech industries and job creation.

He also highlighted the need to help stabilise the EU’s neighbourhood, particularly Africa and the western Balkans, and announced a summit between the EU and the African Union in Brussels in February.

Macron is expected to stand for re-election as president next April in the middle of France’s EU mandate. He is under pressure from political rivals on the right and the extreme right over what they call his lax approach to immigration into France.

He has also been criticised by Valérie Pécresse of the rightwing Les Républicains party — who has emerged as the main threat to his re-election in the latest opinion polls — for not rescheduling the EU presidency in a way that would have averted a conflict with France’s domestic political calendar.

“For these six months the French leaders will be rather on ice because no one can guarantee they will still be there in May,” said Michel Barnier, the EU’s former Brexit negotiator, who has thrown his weight behind Pécresse after losing to her in a party primary.

On economic policy, Macron emphasised the need for the EU’s 27 member states to act together to promote the growth of strong European industries in technology sectors such as semiconductors, batteries for electric vehicles, hydrogen fuel and cloud computing.

“One country does not have sufficient scale,” he said. “We have to act as Europeans” and build “real technological sovereignty in Europe”.

He confirmed France would push for the adoption of the EU’s Digital Markets Act (DMA), which is designed to ensure fair competition and prevent excessive dominance by big platforms such as Google, and the Digital Services Act (DSA), which aims to control hate speech and would make digital companies responsible for the content they publish and the products they sell.

Macron, who meets Germany’s new chancellor Olaf Scholz in Paris on Friday, acknowledged the concerns of fiscally cautious northern Europeans about big deficits and debts among eurozone members, and agreed there was a need for budgetary rules that promoted economic convergence.

Alluding to the debt and deficit constraints of the stability and growth pact, suspended because of the Covid-19 pandemic, Macron said the EU had to take into account the need for big investments given the challenge of economic recovery. “We can’t behave as if nothing has happened,” he said.