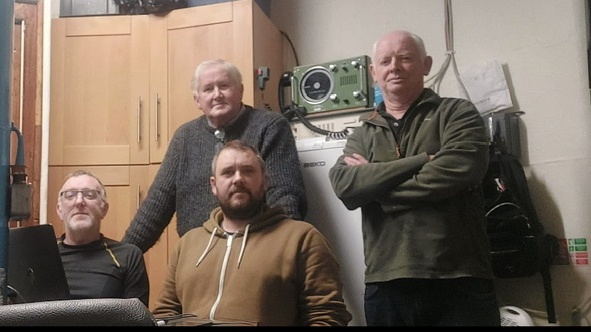 Four lighthouse workers who went to Fastnet Lighthouse in west Cork to carry out maintenance on Friday ended up having front-row seats for Storm Barra as they had to stay onsite due to the conditions.

The lighthouse recorded a wind gust of 159km/h on Tuesday morning but Irish Lights electronic engineer Paul Barron said that it was a safe place to be as the country battened down the hatches to face the storm.

Mr Barron and his colleagues Ronnie O’Driscoll, Dave Purdy and Malcolm Gillies made the journey to Fastnet on Friday to do maintenance work and were due back on Tuesday but their helicopter flight was cancelled because of the storm. They hope to arrive back on the mainland on Thursday.

Mr Barron said they are passing their time onsite by watching Netflix and having a few steaks and rashers. He admitted it was a day to remember on the lighthouse which is 54 metres above the sea.

“There is a team of four of us out here. It has been quite a rough day. We started off this morning at around 2am and by 10am or 11am we were in the eye of the storm. I was in the merchant Navy before as a radio officer so I have seen a lot of bad weather. I am with Irish Lights 32 years but I haven’t normally seen it like this. We wouldn’t normally be out in this. You are talking 9m swells with winds gusting up to 90 knots.”

He captured some footage of the storm on his phone. During the worst of the weather the men found it hard to hear each other as it was so noisy during the squalls.

The tower was “shuddering a bit” but Mr Barron managed to shoot video footage which attracted attention online and even a call from Sky News.

He says the lighthouse has kitchen facilities and they always bring additional food in case of emergency.

“It could be a fine summer’s day and there could be thick fog and the chopper wouldn’t take off so we always bring extra food. We are passing the time by watching Netflix! This is a good place to be in the eye of a storm. This lighthouse has been built a hundred years so it has seen a lot of storms.”

As for families being concerned about the men Mr Barron jokes that their loved ones are probably relieved they aren’t at home hogging the remote control.

Meanwhile, in Cork city centre the river Lee spilled on to quays and roads on Tuesday morning but no major damage to property was caused. Debris and falling trees kept local authority crews busy and power outages were reported in a number of areas across the county.

At least 23 properties were flooded in Bantry in west Cork. The council had placed sandbags along the quay wall and the fire brigade had six manned pumps around the town.

In north Cork, a lorry driver had a lucky escape in Fermoy when his vehicle overturned on the motorway during the high winds. Traffic diversions were put in place following the incident.