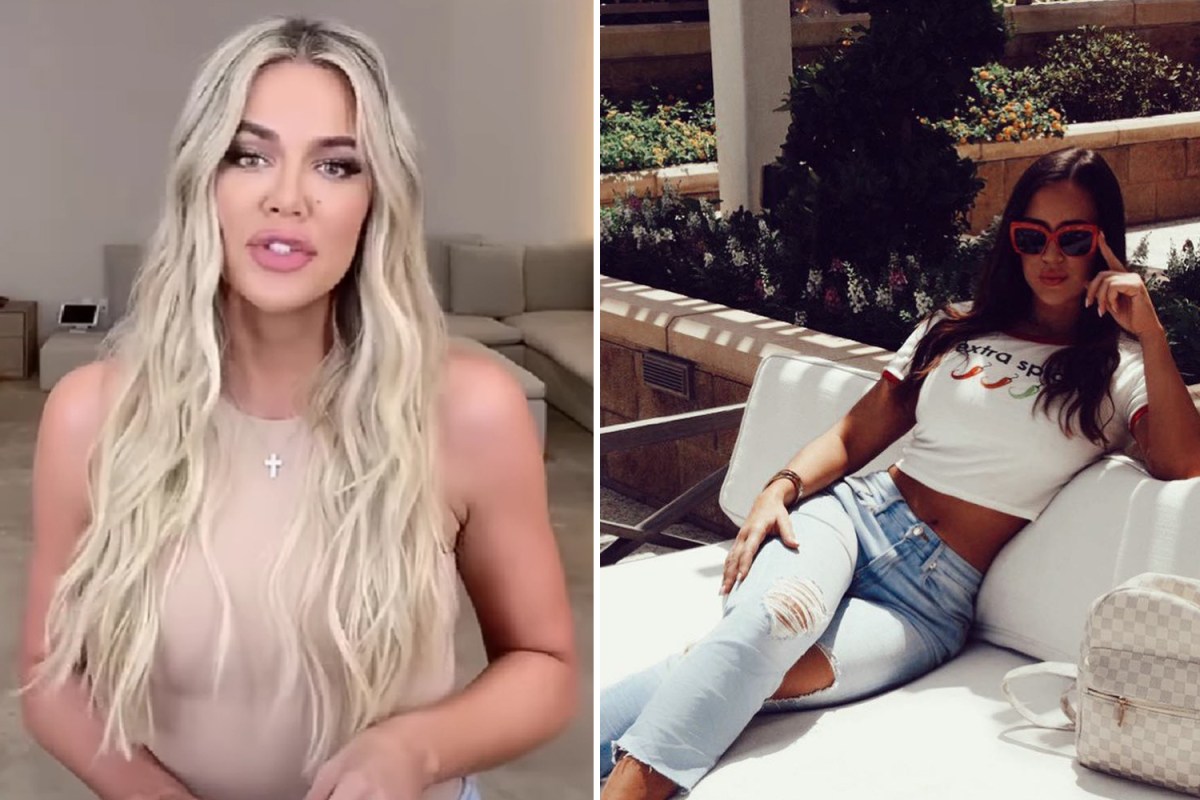 Tristan recently confirmed that he fathered a child with the former personal trainer.

Khloe’s company, Good American, liked a photo Maralee posted back in 2019 – years before she and Tristan were an item.

It’s unclear whether the Keeping Up With the Kardashians alum herself, or someone who works for the company. The latter, however, is more likely.

The post showed Maralee sitting outside on a couch.

She was wearing a tiny crop top with chile peppers on it the read: “extra spicy.”

Maralee paired to top with jeans and red sunglasses.

In a second photo, she pulled her glasses down slightly.

Maralee gave birth to Tristan’s son on December 1, amid a legal battle with the NBA star in which she was seeking financial support from him.

He confirmed paternity weeks after the baby was born.

In the days since his shocking confession, Khloe has been keeping a low profile.

She’s been spotted spending time with daughter True, who she shares with the Canada native.

Khloe and True were recently seen furniture shopping for a new home.

True smiled and danced around with a friend during the outing, believed to be Rob Kardashian’s daughter Dream.

She wore and all-black long sleeved top with ripped jeans.

Khloe wore a mask at times, and a pair of dark sunglasses.

The sighting came after Khloe shared a post about “very painful moments” in life amid the scandal involving her ex.

Tristan fathered a son with Maralee Nichols after cheating on Khloe in 2021.

Khloe hasn’t publicly commented on his infidelity, but has hinted at it with cryptic quotes online.

Although she hasn’t publicly responded to Tristan – who shared the news, along with an apology, on Instagram – she has spoken with him.

A source told Page Six that the pair chatted amid the drama, saying: “Khloe decided not to respond back publicly, but privately she let him know she appreciated the message.

“She is taking the high road, and while she will never, ever get back with him, Khloe really wants Tristan to be a good father to [their daughter] True, and for him to be a big part of their daughter’s life.”

The source went on to say that Khloe is focusing on True: “She’s a great mom and she wants her daughter to have a good relationship with her dad.

“So for that reason, Khloe is not going to fight with Tristan or block him from the family.”

After roughly a month of speculation, Tristan confirmed that paternity results shows he is the father of Maralee’s child and issued an apology to his ex.

He wrote on his Instagram Story at the time: “Today, paternity test results revealed that I fathered a child with Maralee Nichols. I take full responsibility for my actions.

“Now that paternity has been establish, I look forward to amicably raising our son.

“I sincerely apologize to everyone I’ve hurt or disappointed throughout this ordeal both publicly and privately.”

Tristan then turned his attention to his ex.

“You don’t deserve the way I have treated you over the years. My actions have certainly not lined up with the way I view you.

“I have the utmost respect and love for you, regardless of what you may think. Again I am so incredibly sorry.”

She claimed in her filing that she and Tristan conceived the baby on his birthday back in MArch.

Khloe and Tristan were a couple at the time.

The professional basketball player initially claimed his relationship with Maralee was a one-time hookup.

He later confessed that they met up several times for sex over several months.

Tristan said in legal documents that he and Maralee had a four-month affair, from December 2020 to March 2021.

The Sun previously reported that Khloe is “mortified” by the latest cheating scandal, as Tristan has been caught more than once.