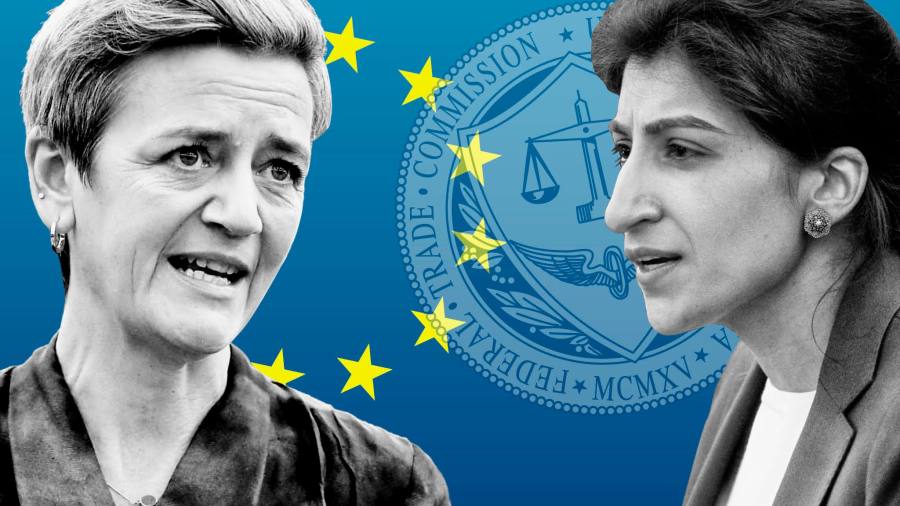 Lina Khan’s selection as head of the US Federal Trade Commission has ushered in a new era of co-operation between regulators on both sides of the Atlantic, according to Margrethe Vestager, the EU’s competition chief.

Vestager told the Financial Times she saw “a lot of alignment” with her American colleagues on policymaking and legal enforcement, as European regulators welcome a new age of trustbusting under US President Joe Biden.

Her comments reflect a new closeness between competition regulators in the US, EU and UK as they pursue parallel cases into proposed deals by Facebook, Nvidia and Illumina. Officials in the Biden administration say such collaboration will be essential as they look to toughen America’s approach to competition law, especially in the technology sector.

The transatlantic co-operation has raised alarms in US boardrooms, however, where executives have already been highly critical of Khan, who has been credited with overhauling the Democratic party’s comparatively hands-off approach to competition policy.

By convincing EU authorities to take up the Biden administration’s priorities, critics argue, she has extended the power of an agency that has occasionally found itself constrained by US court rulings, most recently bringing a sweeping FTC case against Facebook.

“We find it inspiring when we see the Facebook case that the FTC filed, and we follow their investigations,” Vestager told the FT about the commission’s case against the social media company.

“I think it was really interesting that both Jonathan Kanter [the newly appointed chief of the US Department of Justice’s antitrust division], Lina Khan and I, we are different generations,” said Vestager, 53. “We have different years of experience . . . we have different educational backgrounds, but there’s a lot of alignment in the way that we think”.

Despite Vestager’s warm words, some in corporate America argue that regulators are colluding to block transactions they do not like, even if they do not fall strictly under their jurisdictions.

Sean Heather, senior vice-president of international regulatory affairs and antitrust at the US Chamber of Commerce, said: “International commitments direct antitrust regulators to keep their hands off deals that have zero legitimate local nexus to their jurisdiction.”

He added: “‘Divide and conquer’ strategies among antitrust agencies to block mergers in order to evade a jurisdiction based review on the merits would be itself cartel behaviour.”

Last week, Illumina took aim at the European Commission over its investigation into the biotech company’s $8bn takeover of Grail, even though Grail has no activities in Europe.

Daniel Beard, the company’s lawyer, told a hearing at the European General Court: “If the commission is going to radically change policy, then businesses should know. Think about business certainty.”

Illumina’s case is just one of three under scrutiny from regulators in the US and Europe, as the watchdogs across the Atlantic become increasingly aligned.

US regulators earlier this month sued to block Nvidia’s acquisition of UK chip design company Arm from SoftBank, a deal valued at $82bn, following similar probes launched by the EU and UK.

And last month, the UK’s Competition and Markets Authority ordered Facebook’s parent company Meta to unwind its $315m acquisition of Giphy. Meta complained about the judgment, not least because it said Giphy had no concrete plans to enter the UK market.

People with knowledge of the probes into Nvidia and Illumina told the FT regulators in the US and Europe are in regular contact and have been sharing information about their cases.

Earlier this month, Khan, Kanter and Vestager met in Washington, where they launched the EU-US Joint Technology Competition Policy Dialogue. As part of that, the two sides said their aim was “co-ordinating as much as possible on policy and enforcement”, especially in the technology sector.

“I think that 10 years ago there might have been a couple of calls during [a] case,” said an official at the DoJ. During significant cases today, “there might be a weekly call . . .[or] more than once a week”.

“The collaboration is quite strong right now,” the official added. “This is a pretty exciting time.”

William Kovacic, a former Republican chair of the FTC and now a non-executive director of the UK CMA, said: “Efforts have intensified recently for a number of reasons. Not least, when dealing with markets as new and as complex as Big Tech, it is good to be able to pool resources and share information.”

In recent years, European and American regulators have been united by the shared challenge of curbing the corporate power of the big technology groups, many of which have opaque revenue streams and business models.

Vestager said: “This alignment of codes when it comes to digital — it’s really important that we can get together and discuss how our real life practice can set that into motion if we have cases.”

Bill Baer, visiting fellow at the Brookings Institution and former head of the DoJ’s antitrust division, said: “It’s not so much a new approach as it is a recognition that these challenges are global and getting to good outcomes requires unusually close collaboration.”

Early signs of such co-operation started under the Trump administration, when the UK’s CMA blocked the proposed $360m merger between the two US-based airline software companies Sabre and Farelogix, after the DoJ had lost its own case in court.

But this joint approach was patchy, and subject to the whims of the former president, who disliked many large technology companies but often bridled at the idea of European regulators taking action against them.

Biden, however, has prompted a much more fundamental rethink of US competition policy by appointing three progressives to the leading antitrust roles in his administration: Khan at the FTC, Kanter at the DoJ and Tim Wu as a White House adviser.

All three have argued for tougher competition enforcement, especially in the technology sector. Khan made her name as an academic by calling for Amazon to be broken up.

“For years US regulators viewed their European counterparts as anti-American socialists,” said one Washington-based lobbyist. “Now arguably the Americans are to the left of the Europeans.”

One Wall Street banker, who has advised on complex deals for about three decades, said: “This whole new order reverses the burden on the company. The next time you come to do a deal, it’s not up to the DoJ to tell you whether it’s good or bad . . . it’s up to you to prove that it does fly.”

There are some signs the tougher and more co-ordinated approach has begun to have an effect.

Mega takeovers in the US — deals north of $25bn or $50bn — plummeted in 2021, according to data from Refinitiv, as companies particularly in pharma and tech have shied away from taking regulatory risks.

But at the same time, smaller mergers appear to be progressing unencumbered. Dealmaking hit an all-time high in 2021, with more than $5tn worth of transactions generated predominantly by private equity firms, which tend to do smaller deals that avoid regulatory attention.

Sign up here to receive Due Diligence, top stories from the world of corporate finance, sent straight to your inbox every Tuesday to Friday

“The [regulatory] pendulum has shifted against corporations but we should be focusing on private equity more,” said a dealmaker at a bulge bracket investment bank.

“The private equity guys don’t have any problem. In fact, they end up buying stuff on the cheap and nobody seems to care if they later fire thousands of people.”

But dealmakers say that in the coming years they will have to be more conscious of what regulators on the other side of the Atlantic might think too.

One corporate lawyer in the US told the FT the new era of co-operation between Brussels and Washington represented the most serious current threat to dealmaking.

“[They] are complementing each other. Will this lead to more deals getting blocked? Absolutely. What can’t get blocked here might be blocked in the European Union, and the guys in DC will be assisting them.”