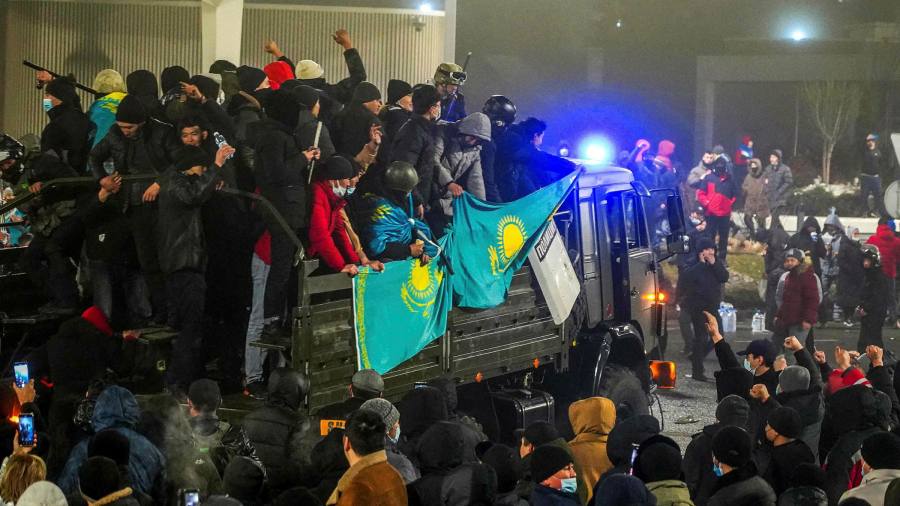 Thirty years after the fall of the Soviet Union, the protests that have shaken Kazakhstan may mark the end of Nursultan Nazarbayev’s long grip on power — but do not suggest the oil-rich central Asian country will make a smooth transition from autocratic rule.

Nazarbayev had ruled the country for most of Kazakhstan’s post-Soviet history, stepping down in 2019 to hand his official role as president to a designated successor, Kassym-Jomart Tokayev. But Nazarbayev hung on to his role as chair of the national security council, prolonging his grip on the closely controlled state.

In the wake of the spiralling protests this week, however, Tokayev — once seen as nothing but an administrative appointee — has publicly assumed control of the security forces from the man who put him in the presidency. Nazarbayev, the 81-year-old “leader of the nation” and for whom the capital city is now named — has been sidelined, with rumours even suggesting he may have left Kazakhstan.

“The Nazarbayev regime and consequently the semi-transition of power which began with his resignation in 2019 are now both over,” said George Voloshin, Paris-based geopolitical analyst at Aperio, a consultancy.

It leaves western investors, who have substantial interests in Kazakhstan’s rich oil and gas fields, eyeing a period of upheaval.

For Russia — which sent a contingent of troops to Kazakhstan as part of a regional mutual assistance treaty and is readying for talks with the US on Ukraine and European security — it produces more unwelcome uncertainty on its border.

Ben Godwin, associate director at political risk consultancy Prism, now expects “elite infighting”. “Tokayev has taken over power from Nazarbayev but the Nazarbayev people still control everything, including strategic industries such as oil and gas, banking and mining,” he said.

“If Tokayev is able to secure power, there will be a long period of renegotiating with the remaining oligarchs,” Godwin added.

The protests swelled from demonstrations that followed the doubling of the price of liquefied petroleum gas, the main fuel for vehicles, after price controls were lifted on January 1. The discontent over fuel prices quickly turned into broader hostility towards Nazarbayev.

“The fact that localised economically motivated grievances in the western part of the country quickly spread to other regions indicates that there was a lot of pent-up dissatisfaction with the government in the general public,” said Alex Melikishvili, an analyst at IHS Markit.

There was anticipation after the 2019 presidential transition of political liberalisation but Tokayev’s doctrine of a “listening state” — which was supposed to make the government more responsive to people’s needs — “has not really brought tangible results in terms of overall democratisation”, said Melikishvili. “This spring will mark three years since Tokayev has been in power and there are still no opposition parties in Kazakhstan.”

The worsening economic situation in the country has exacerbated discontent. Kazakhstan’s commodities-dependent economy has been suffering since 2014 when oil prices crashed. The pandemic added more strain, with higher prices, a widening wealth gap and the state failing to help the most vulnerable in an adequate way, according to analysts.

The protests “have to do with the bad economic situation and the lack of political reforms to tackle the chronic deficit of political competition and the domination of the Nazarbayev family and affiliated clans within the economy”, said Aperio’s Voloshin.

Tokayev initially responded to the protests with concessions, including cutting LPG prices to below last year’s level and sacking the government. But he changed tack immediately after gaining control of the security council, declaring a state of emergency in the entire country.

He also called in troops from the Russia-led Collective Security Treaty Organization, a mutual defence treaty that also includes Armenia, Belarus, Kyrgyzstan and Tajikistan. Moscow’s quick deployment of troops is unprecedented for the CSTO: the alliance created in 1992 declined to intervene in ethnic clashes in Kyrgyzstan in 2010 and to support Armenia against Azerbaijan in 2021.

Russia, the powerbroker in the region, is interested in retaining stability in Kazakhstan, with which it shares its longest border of almost 8,000km. The countries have close economic links and Russia maintains several military bases and the Baikonur space rocket launch site on Kazakhstan soil.

“The next two days will be defining for Tokayev, who has to show a tough response, especially in Almaty,” said Stanislav Pritchin, senior research fellow at the Center for Post-Soviet Studies at the Russian Academy of Sciences.

Protesters have stormed stores, banks and supermarkets in the country’s most populous city.

Prism’s Godwin said Kazakhstan’s western oil-producing region, where the first protests arose on Sunday and which has a history of demonstrations, would remain a problem in the long run. “These people are very different to the people in Almaty and Nur-Sultan. They are extremely determined and extremely angry. And as we saw in 2011, they are prepared to camp out for months,” he said.

Zhanaozen, a city in Mangystau province, has been the scene of frequent protests in recent years over low wages and rising prices. A 2011 protest by striking oil workers turned violent after police attempted to clear their camps.

Given that some of the protesters’ demands are hardly realistic, it may be tough for Tokayev to satisfy them, analysts said — or, despite the government shake-up, to reform Kazakhstan’s ruling structures.

“The new government is unlikely to be qualitatively different from their predecessors because the pool of qualified cadres in Kazakhstan’s ruling circles is limited,” said IHS Markit’s Melikishvili.