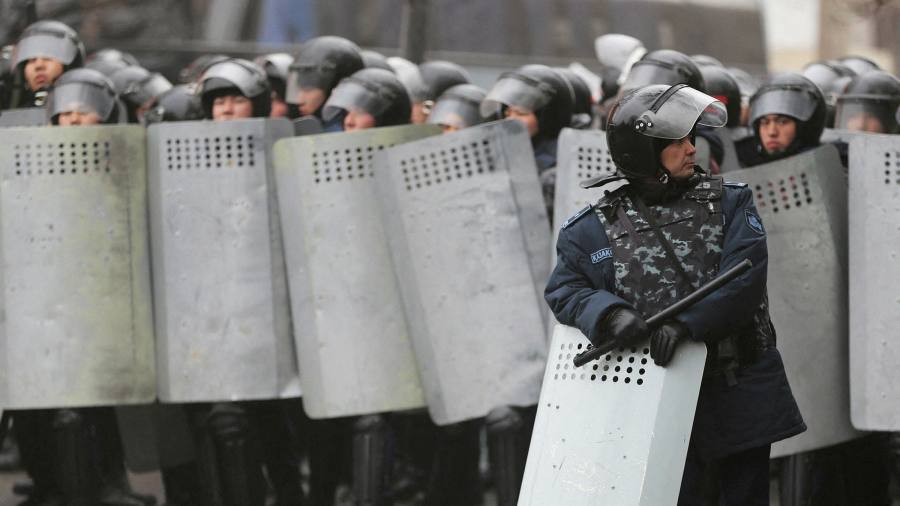 Kazakhstan’s president appealed to a Russian-led military alliance for help on Wednesday after vowing to act with force to curb protests that have swept the resource-rich central Asian nation in the most significant challenge for years to the country’s autocratic rule.

A state of emergency was declared nationwide after anger at rising fuel prices escalated into protests in several cities, with major buildings set alight and demonstrators overrunning an airport in former capital Almaty.

President Kassym-Jomart Tokayev accepted the resignation of the government and said he was assuming control of the country’s security council, giving him more powers to direct security forces or crack down on protests if he saw fit.

It leaves questions over the role of former longtime president Nursultan Nazarbayev, who stepped down in 2019 after three decades as the country’s leader but had retained control of the security council and held significant sway as a “leader of the nation” figure.

Late on Wednesday, Tokayev said he had made an appeal for help to the Collective Security Treaty Organization (CSTO), a Russian-led military alliance that also includes Belarus, Armenia and two of Kazakhstan’s neighbours. He said assistance was needed to fight armed and organised bands of terrorists that had been trained abroad.

Tokayev’s announcement, made after a phone call with his counterparts in Moscow and Minsk, could open the way to the entry of foreign troops into Kazakhstan to assist the government in putting down the protest. The alliance’s treaty promises assistance to member states whose security or stability is threatened.

Speaking earlier in the day, Kremlin spokesman Dmitry Peskov said Kazakhstan was able to handle the situation on its own and had not requested outside help. He also warned against “outside interference”.

Kazakhstan is a major oil producer and a member of the Opec+ group of countries. Brent crude prices rose on Wednesday, in part on worries that the protests could disrupt oil supplies.

The country’s is also significant for global energy markets because of its production of uranium for nuclear power plants. Last year the country accounted for more than 40 per cent of global uranium output. It is also in the world’s top dozen suppliers of zinc and copper.

Kazakhstan, like Russia and other countries in the region, has been struggling with rising prices for basic commodities amid the economic strain of the pandemic.

Protests that started over fuel prices three days ago have since snowballed into the biggest in Kazakhstan’s post-Soviet history. Though Tokayev has made significant concessions to demonstrators, these have done little to quell the situation.

After accepting the government’s resignation on Wednesday, Tokayev also acted on another of the protesters’ demands, saying he would step into the role of chair of the security council, suggesting Nazarbayev, who previously held the role, had been displaced.

“As a result, as the head of state — and, as of today, as the chairman of the security council — I intend to act as forcefully as possible. It is a matter of the security of our citizens,” said Tokayev, who is viewed as a loyal Nazarbayev ally.

The price of Kazakhstan’s dollar-denominated debt dropped after the protests and the resignation of the government. The yield on a bond maturing in 2045 rose nearly 0.2 percentage points to 3.95 per cent, the highest level since May 2020, as its price fell more than 3 cents on the dollar.

Shares in uranium company Kazatomprom dropped 8 per cent, and those of Kaspi.kz bank lost more than 20 per cent.

The upheaval in one of Russia’s largest neighbours is also a potential concern for Moscow, which has enjoyed a close and stable relationship with Kazakhstan’s leadership. Russia’s foreign ministry said it was keeping a keen eye on the situation.

In the most populous city, Almaty, tear gas and stun grenades were used as protesters stormed a presidential residence and set fire to the city’s main administrative building. A video shared on social media showed protesters in another town in the area tearing down a statue of Nazarbayev.

The government blocked access to the internet almost nationwide, according to internet disruption monitors, with reports too of patchy mobile service and the suspension of some TV services. Hundreds of people have been detained.

Workers had gathered at the Tengiz oilfield, the country’s largest, in support of the protest but output had not been affected, a spokesperson for Chevron, which operates the project, told the Financial Times. The spokesperson said the company was working “to resolve this situation as soon as possible”. Tengiz pumps about 600,000 barrels a day of oil, and includes ExxonMobil, Kazakhstan’s KazMunayGas and Russia’s Lukoil as partners.

Some journalists and commentators in Moscow accused unspecified outside forces of stirring up protests in Kazakhstan to destabilise Russia’s eastern flank, ahead of a round of diplomatic negotiations when Moscow wants to discuss the balance of power to its west.

Washington, Moscow and Nato member states are set to meet for talks next week, when Russia intends to press for “security guarantees” to limit the military alliance’s expansion in Europe.