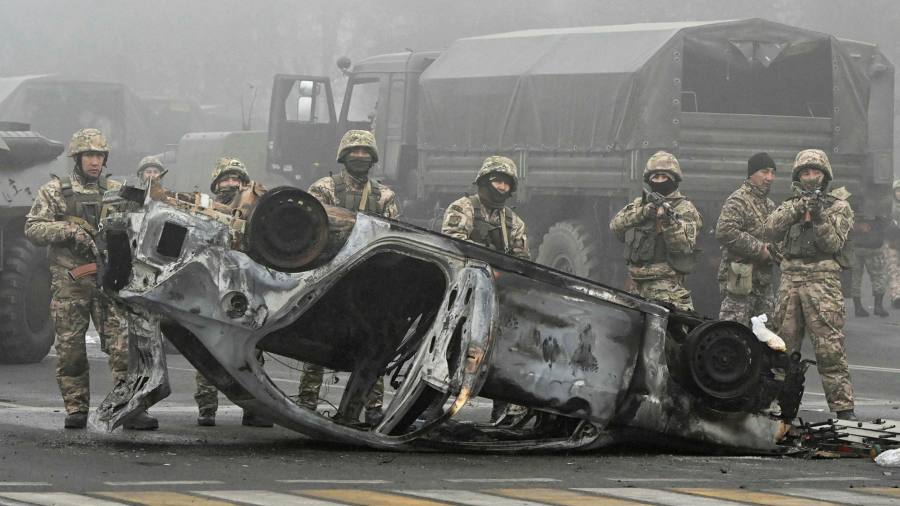 The bloodshed in Kazakhstan is a bitter end to 30 years in which the ex-Soviet republic had seemed — despite occasional flurries of unrest — an example of stable authoritarianism. Former president Nursultan Nazarbayev had suppressed demand for democratic freedoms by pushing through liberalising economic reforms that sucked in foreign investment and raised living standards. Now, facing the biggest protests in years, presidential successor Kassym-Jomart Tokayev has sacked the government and removed Nazarbayev as head of the security council. Authorities say dozens of protesters and at least 12 police have been killed in escalating violence. A Russian-led military alliance has sent in paratroopers as “peacekeepers”.

One lesson for democracies and autocracies alike is the explosive political risk of rising energy prices — even in a country, like Kazakhstan, with big reserves. Initially peaceful protests were triggered by a rise in liquid petroleum gas prices, used widely to fuel cars in the country’s west. They turned into an outpouring of pent-up anger over corruption, lack of political choice and the dominance of the 81-year-old Nazarbayev’s family and allies in top political and industrial roles.

With no clear leaders or demands, and an upsurge in looting that suggests they may have been infiltrated by criminal groups — or provocateurs — the protests might have struggled to gain the critical mass to turn into a revolution. But Tokayev was sufficiently unsure of his own security forces’ ability to put them down that he invited in the Moscow-based Collective Security Treaty Organization to help restore order. For the first time in its 20-year history, the regional pact is taking part in what it calls joint “anti-terrorism” operations.

Moscow had reason to accept the request. Alongside Belarus and Russia, Kazakhstan is one of the founders of the Eurasian Economic Union that Vladimir Putin has assembled as a kind of anti-EU and pressed other ex-Soviet states to join. All three countries are also dominated by ageing autocrats. Russia has already had to prop up the Belarusian dictator Alexander Lukashenko after mass protests in 2020. Now it is doing so again in Kazakhstan — where Nazarbayev’s decision to relinquish the presidency in 2019 but remain life-long “Leader of the Nation” had been seen as a potential model for Putin.

Russia’s intervention may prevent the arrival of a new, unfriendly, government in its sphere of influence, in contrast to the revolutions in Ukraine in 2014 and Georgia in 2003. But, as in Belarus, if the Tokayev regime survives, a crackdown on opposition is likely to follow. Discontent will only be driven underground to fester.

Kremlin-linked analysts suggest the CSTO deployment is aimed at heading off a potential civil conflict after weapons appeared among Kazakh protesters. But it may stoke popular resentment, and will leave the country’s leadership, like that in Minsk, more beholden to Russia. China and Turkey, which have also vied for influence in the resource-rich country, are watching closely.

The unrest in central Asia provides an awkward backdrop, too, for next week’s talks with the US and Nato after Russia’s troop build-up around Ukraine. Putin is likely to see it, without foundation, as western interference timed for the eve of the negotiations. Kremlin delegates will surely be instructed to drive through the president’s demands to curb Nato. As he eyes what is happening to Nazarbayev, a man from whom he has drawn inspiration, Putin may be all the more eager for a diplomatic, or failing that military, success that he can sell to his own public.