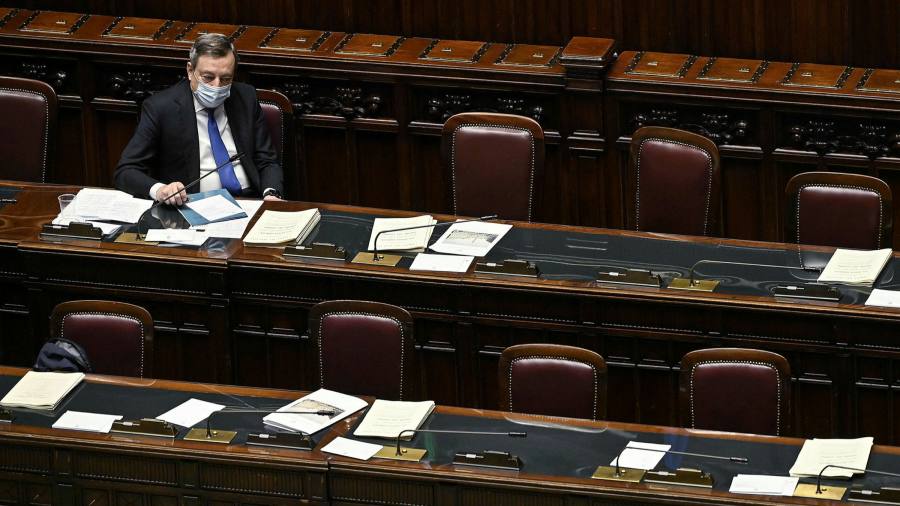 Workers from two of Italy’s largest trade unions will strike on Thursday to protest against government economic and fiscal policy just days ahead of parliament’s approval of a crucial budget law.

The general strike marks the first big face-off with Mario Draghi, Italy’s prime minister, since the former European Central Bank chief took the helm in February. It highlights the political challenges his government faces in passing crucial structural reforms, including on tax and pensions, to ensure that Italy gets tens of billions of euros from the EU to aid its post-pandemic recovery.

The CGIL and UIL labour unions — which have a combined membership of more than 7.5m people — said the announced budget was “unsatisfactory”. Their main objection is to an envisaged €8bn of tax cuts, which unions say favour higher earners. Retirement rules and labour contracts are other causes of disagreement.

Pierpaolo Bombardieri, the UIL secretary-general, said the government had prioritised political compromise over social demands. “When there’s a [complicated] political mediation, there’s no room for one with the [unions],” he told the Financial Times.

Under the measures announced by the government, workers earning between €28,000 and €55,000 per year will benefit from a reduction in their tax rate, unlike the poorest part of the population. Unions say the government has not devoted enough of its attention to those who were affected the most by the economic fallout from the Covid-19 pandemic.

CISL, Italy’s other main trade union, has said it will not take part in the strike, saying it risks “radicalising positions at a delicate time for the country”.

The strike shows the balancing act for Draghi, who as the leader of a national unity government is trying to pass reforms while rebooting the country’s economy and working to avoid a fourth wave of Covid-19 infections.

Bombardieri said tax cuts should have focused on reducing labour costs that were among the highest in Europe, rather than reducing tax rates on personal income. “In the face of rising inflation, tackling the cost of labour would have increased real wages,” said Bombardieri.

On Tuesday, the government announced it would allocate €300m to mitigate the impact of rising energy costs on lower earning families. A meeting between union chiefs and the government to discuss the pension reform, another sticking point of the discussion, has been scheduled for Monday.

The prime minister’s office said the unions’ choice to stage the strike was “unjustified” while the leader of the League, Matteo Salvini, called union leaders “irresponsible”. A spokesperson for the Democratic party said the party hoped to continue a constructive dialogue with CIGL and UIL after the strike.

Bombardieri said it was “fair to raise questions on situations of social distress”.

“The narrative that everything is going perfectly well and the exclusive focus on the country’s GDP growth figure is misleading,” he said.