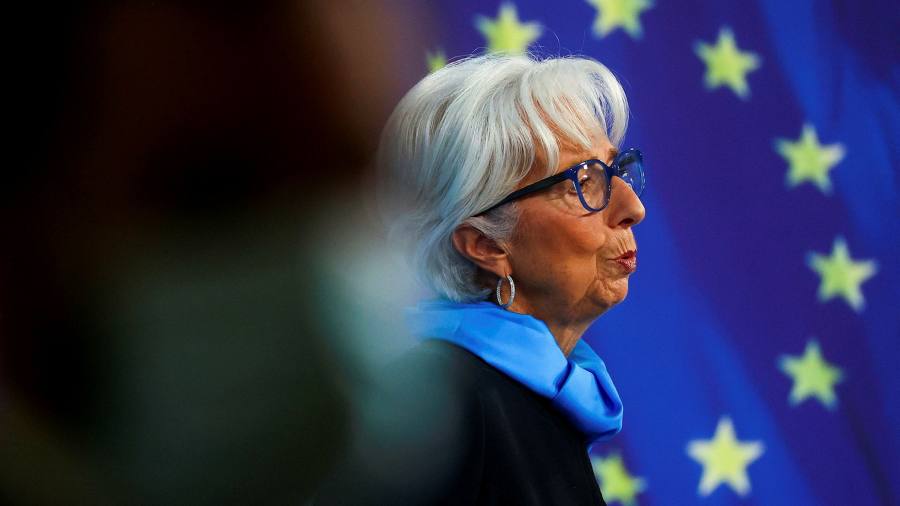 A key gauge of the risk associated with holding Italian bonds climbed on Monday to its highest in a year, a rise fuelled by questions over the strength of the European Central Bank’s backing of riskier government debt.

Eurozone bonds have been swept up in a global debt sell-off over the past week as traders bet that persistently high inflation will force the ECB to lift interest rates from record lows as soon as next year.

The selling intensified in the wake of last Thursday’s ECB meeting, despite Christine Lagarde, the central bank’s president, insisting that 2022 rate rises were not consistent with its guidance. The pressure has been particularly intense on bonds issued by countries in the eurozone’s heavily indebted “periphery”.

The extra yield or spread demanded by investors to buy Italian 10-year debt rather than its ultra-safe German equivalent — long considered a barometer of eurozone risks — widened to its highest level since October 2020 at 1.37 percentage points, up from less than 1 percentage point in late September.

Analysts said that Lagarde’s confirmation last week that the ECB’s €1.85tn pandemic-era bond-buying programme — known as the PEPP — would end in March had further knocked confidence in Italian debt. Spain, Portugal, and Greece have also seen their yield spreads relative to Germany expand in recent days.

A public holiday in many European countries, including Italy, may have contributed to quiet trading conditions which exacerbated market moves on Monday, some analysts said.

“With the market now facing a future when [the PEPP] is going away and less monetary easing is likely, it is perhaps natural that it asks how much support spreads can expect from the ECB in the future,” said HSBC European rates strategist Chris Attfield. “This widening move may have some way to run.”

With its often unstable politics and borrowings of more than 150 per cent of gross domestic product, Italy has in the past been a pressure point for investors’ concerns about debt sustainability in the euro area.

Following a brief spike in borrowing costs during the early stages of the pandemic, bonds issued by the eurozone’s third-largest economy have been among the biggest beneficiaries of ECB support during the pandemic. Despite the recent rise, 10-year spreads remain well short of the 2.8 percentage points and more hit during March last year, let alone levels of upwards of 5 percentage points reached at the height of the eurozone debt crisis a decade ago.

Some investors say the central bank would likely step in if the current selling accelerates. Under the PEPP, it has the flexibility to step up purchases to prevent “a tightening of financing conditions”, a feature that some fund managers say will be maintained by a beefed-up version of its regular asset purchases due to replace the current programme after March.

“For the ECB, Italian spreads are probably the key indicator of financing conditions,” said Mohammed Kazmi, a portfolio manager at Union Bancaire Privée. “If we were to get a further aggressive widening from here, we would imagine the ECB would come in and buy.”