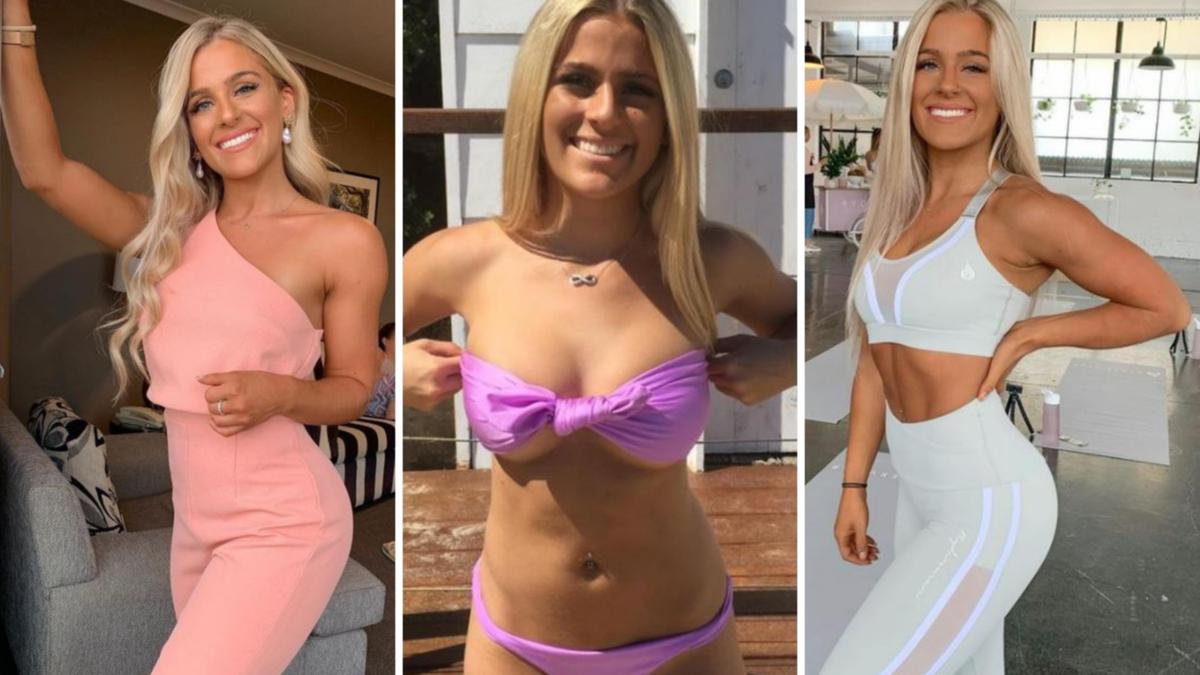 A young woman who was accused of editing her body in a gym workout video to make her waist appear slimmer has detailed the ‘dark side of social media’ after her weight gain spiralled into bulimia.

Chloe Roberts tearfully denied doctoring her video earlier this week after her footage was ruthlessly mocked on Celeb Spellcheck, a popular account that mocks influencers for their spelling mistakes and “embarrassing” social media fails.

The 22-year-old university student, from Melbourne, has since responded to the nasty accusations, saying she would “never ever” edit her content to make herself appear thinner after she ‘worked so hard’ to get into shape.

Speaking to 7Lifestyle, Chloe spoke out about how she fell into the grips of the eating disorder, an illness that saw her go through a vicious cycle of binge eating, vomiting and then “punishing” herself with starvation.

“I’d always been sporty and used to do gymnastics 21 hours a week – but there was one year I stopped and found myself gaining weight. And before I realised, bulimia was taking over my life,’ she said.

“I didn’t have a good relationship with food. I honestly thought carbs were the enemy and that I had to deprive myself in order to be skinny however that’s when I’d binge and then go and throw it all up.

“No one knew because I wasn’t “skinny”. I was in denial and my relationship with food was destroying many aspects of my life. From family to school, I was suffering and I felt like everything was against me. I wasn’t healthy.

“My relationship with food was disgusting to be quite honest.”

At the age of 16, Chloe said she started comparing herself to other girls after she signed up to Instagram.

“Social media has always been a part of my life, as I had always been one to enjoy sharing my life with others, however there are darker sides to social media, especially as an impressionable young girl,” she said.

“I was not equipped to handle social media as no one really truly understood its power yet. But I slowly started the cycle that many go through, comparing myself to others. Comparison is very dangerous because it has a direct link to yourself image and confidence.

“My self-confidence slowly depleted, and I felt the need to take things into my own hands in order to live up to expectations of body standards.”

After coming to terms with her crippling eating disorder, her turning point came when she found the strength to seek help.

“Once I recovered my body confidence still wasn’t amazing… I decided to go to gym. I always lived an active lifestyle but to go into a foreign space like a gym which at the time was a very male dominated “sport” was scary,” she said.

“I eventually decided to go and push through the anxiety and instead use it as strength and I quickly fell in love with weightlifting… I saw strength training in a new light.

“I don’t know if it was the actual activity or the feeling after the session, but I felt inspired and motivated. I fell in love with the strength training lifestyle and the way it pushes and transforms your body.”

“I was losing fat and building muscle. My body was thriving off the food coming off being in starvation mode. I lost weight and body fat, eating more food, training the same amount but more intensely and with a purpose,” she said.

“I looked so much healthier and stronger. I genuinely felt like I was flourishing, eating to fuel my body and training to get stronger was such an incredible mindset for me that felt extremely empowering.”

Fast forward four years, Chloe has since developed a healthy relationship with food – and she now eats up to four to five meals a day after she overcame the eating disorder.

“I love nourishing my body with foods that will enable it to thrive and therefore I choose to have a healthier diet during the week and on the weekend indulge a little more to enable that balance,” she said.

“Balance is the key I believe to life and achieving a good balance of incorporating exercise into your daily routine has so many benefits not only to your physical but also mental wellbeing and that is so detrimental to your overall health. This includes foods.”

For breakfast, she would usually have avocado on toast with two eggs or banana protein pancakes. At lunchtime, she would enjoy a tuna salad or tuna, tomato and avocado on rice cakes.

“Other snacks can be whatever I feel like on the day,” she said.

For dinner, she would eat a steak or salmon with rice.

“I might have a snack after dinner like protein oats with raspberries or yoghurt with muesli to curb my sweet tooth,” she said.

Chloe said she now eats anything she wants, within reason – and she doesn’t deprive herself of foods she loves or adhere to a strict calorie intake.

“I am a sucker for chocolate, cannot go a week without it but the difference from now to before is that I’m in a great mind space where I know that if I have chocolate, ice cream or KFC zinger stacker box for dinner, it will be okay,” she said.

“I am healthy and that’s all that matters, I believe you shouldn’t deprive yourself because that’s when you resent the lifestyle. It’s mindful eating and I love it.”

She now works out at the gym four to five times a week.

Chloe now has a huge following of more than 300,000 followers on Instagram where she shares daily updates about her fitness and health.

Earlier this week, Chloe broke down in tears after eagle-eyed critics started speculating the 22-year-old had used a body editing app to make her waist appear smaller within a second of her working out at a gym.

“I train so hard to feel and look my best and I’m very confident in my body as I feel strong and empowered, so for people to try and undermine my progress by making these accusations really hurt me,” she told 7Lifestyle.

“My fitness and body confidence journey has taken a long time and I would never jeopardise that by editing a video. I’m very strong and can deal with backlash but this is my work, and I couldn’t bear the thought of people thinking that it’s all a lie.”

“I would never want to set unrealistic body standards that are false. I am so beyond proud and confident in my body and I want others to feel the same.”

For those looking to get into shape but don’t know where to start, Chloe said: “I know how daunting “starting” can be, but there is no better moment like the current to start.”