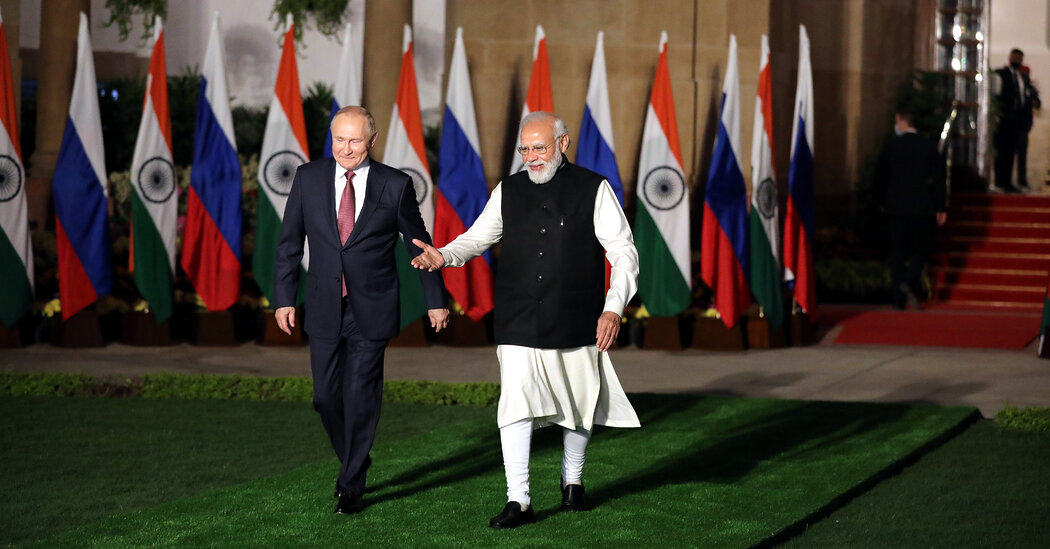 NEW DELHI — India and Russia announced expanding defense ties on Monday during a visit by President Vladimir Putin to New Delhi, including the details of a $5.4 billion missile defense system sale to India, despite a risk of sanctions from the United States.

“Supplies have begun this month and will continue to happen,” India’s foreign secretary, Harsh Vardhan Shringla, told reporters about the missile defense system after the meeting between Mr. Putin and India’s Prime Minister Narendra Modi. “It is important to note that whether it is us or Russia, we conduct an independent foreign policy.”

The confirmation that the missile defense system deal, first agreed upon in 2018, was going ahead despite threats that it could affect India’s growing relations with the United States signaled that New Delhi was willing to take calculated risks to bolster its defenses against an emboldened China at its borders.

India and China have failed to resolve tensions since deadly skirmishes between the two countries’ troops along their shared border last year, and their militaries remain on a war footing in the Himalayas going into a second harsh winter. India may have concluded that the United States would not penalize it for buying the defense system because the two countries have been working together closely to address the rising threat from China.

In 2020, the Trump administration issued sanctions against Turkey for a similar purchase, more than three years after it bought the missile defense system from Russia.

India has deep ties to Moscow, and India’s military has for decades largely depended on Russian equipment. Even as the country has diversified its weapons imports and grown closer to the United States in trade and defense cooperation, India still relies on Russia for about half of its arms supplies.

The two countries have also set an ambitious goal of more than tripling bilateral trade to $30bn by 2025.

“In the last few decades, several fundamentals have changed,” Mr. Modi said in welcoming Mr. Putin. “New geopolitical angles have emerged. Amidst all such variables, Indo-Russian friendship has been constant.”

The S-400 surface-to-air missile defense system is one of the world’s most sophisticated, with the ability to reach multiple targets at a maximum distance of about 250 miles. It is also a more affordable option from India’s perspective, costing reportedly half of that of the U.S. Patriot system. Indian military officials have called it “a booster dose” to the country’s military, which has struggled to modernize because of financial strains.

“S-400 deal doesn’t have only a symbolic meaning,” Russia’s foreign minister, Sergei Lavrov, told the Indian news agency ANI on Monday. “It has a very important practical meaning for an Indian defense capability.”

In addition to the S-400 missile defense system, India and Russia signed a $600 million deal to locally manufacture hundreds of thousands of Russian AK-203 rifles and an additional agreement to extend cooperation between the countries on military technology for the next decade.

The rifles, which are expected to replace the older Kalashnikov-style rifles used by Indian troops, will be manufactured in the Indian state of Uttar Pradesh through a joint venture, according to local media reports.

“India doesn’t have the kind of kitty China has with all our developmental challenges,” said Mr. Unnikrishnan. “While American or Israeli equipment is state of the art, the money it requires is three times more.”

Mr. Unnikrishnan said heavy repercussions for India were unlikely because the United States needs an India that is militarily strong to balance China’s rise in the region.

“As much as India is taking a risk I genuinely believe the U.S. will also be taking a risk if it takes the path of sanctions,” he said. “The U.S. is sophisticated enough to understand that they should not be harming their own potential allies in a bigger picture struggle they have.”

The fall of Afghanistan to the Taliban in August has worried both India and Russia on the shared threat emanating from regional terror groups. The statement released after Mr. Putin’s meeting with Mr. Modi stressed the need for an inclusive government in Afghanistan to ensure the country’s stability and prevent it from once again becoming a terror or narcotics hub.

“The leaders emphasized that Afghanistan’s territory should not be used for sheltering, training, planning or financing any terrorist groups,” the statement said.

Mr. Putin’s trip to India comes as a buildup of Russian troops near Ukraine has Western officials warning that the Kremlin could be planning a large-scale invasion. They have said that Russia could face damaging sanctions from the United States and Europe if Mr. Putin goes through with an attack.

But his visit to India — his first foreign trip since his June summit with President Biden in Geneva — also telegraphed that Russia still has plenty of friends beyond the West.