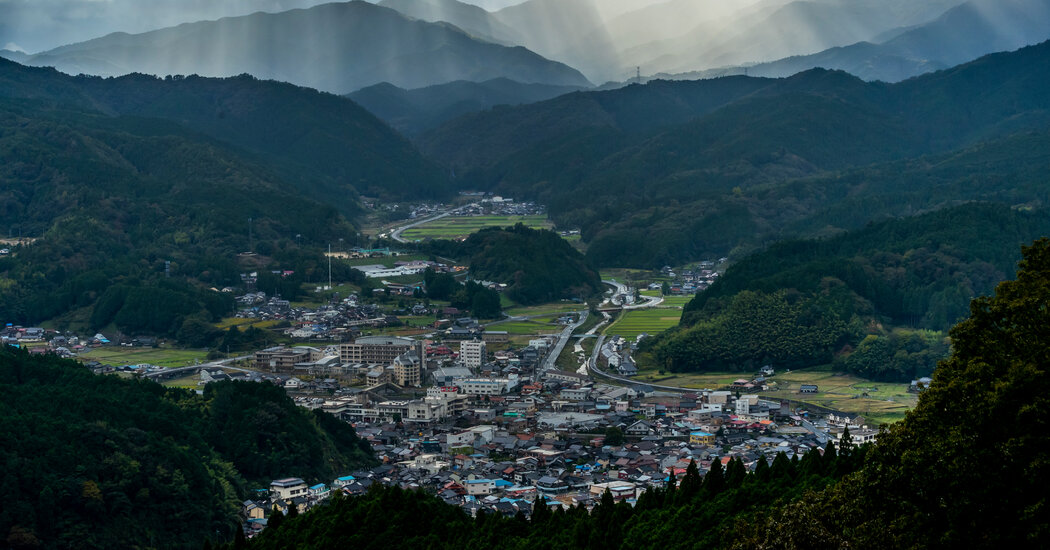 CHIZU, Japan — The mountain village of Chizu explains a lot about how one party has kept a virtual lock on power in Japan for close to seven decades.

The village, in western Japan, has long been in decline. Its population has dwindled to 6,600 people, close to half of them elderly. The obstetrics ward at the hospital closed more than 15 years ago. The once-dominant forestry industry has shriveled, and a year-end fair is no longer held.

Yet last year, backed by a large dollop of central government funding, the village built a 12,000-square-foot library with a sizable children’s section. It erected a new nursery school in 2017, and the middle school underwent a complete renovation two years earlier. Construction workers constantly upgrade a sparsely traveled highway into the village.

As voters prepare to select members of Parliament in a national election on Sunday, the residents of Chizu are acutely cognizant of the forces behind this largess. In Japan, rural votes count for more than urban ones, giving less-populated areas like Chizu a disproportionately large number of seats in Parliament, and more chances to register their concerns with national politicians.

This structure plays to the advantage of the conservative Liberal Democratic Party, which has governed Japan for all but four years since 1955. The party is expected to eke out a majority in the parliamentary election, partly on the strength of support from the rural areas showered with taxpayer money.

In some ways, the power of Japan’s rural population parallels the political landscape in the United States, where each state has two senators regardless of population size — giving the Republican Party an outsized advantage because of its dominance of rural states.

In Chizu, the nexus between political representation and access to public coffers is unmistakable. Because its residents are represented by a heavyweight member of the L.D.P. in Parliament, “we can get sufficient government aid,” said Chizu’s mayor, Hideo Kaneko, 68, in an interview in his renovated office.

Chizu is in Tottori, Japan’s least populated prefecture. In the district that includes Chizu, the member of Parliament represents fewer than half the number of voters served by the lower house lawmaker in Tokyo’s most densely populated district.

Critics say such disparities, which are common in rural communities, are fundamentally at odds with the democratic principle of “one person, one vote” and have skewed Japan’s politics and domestic priorities.

At a time when an increasing proportion of the Japanese population is concentrated in urban centers, “Japan’s policies are focused on rural areas,” said Junichiro Wada, a political economist at Yokohama City University.

Because rural voters skew older and lean conservative, said Yusaku Horiuchi, a professor of government and Japanese studies at Dartmouth College, they tend to elect politicians — often from the L.D.P. — who maintain the status quo.

So, for example, although the bulk of the Japanese public favors changing a law that stipulates all married couples must share a surname, rural voters are more likely to support keeping the law as it is. “If the voter malapportionment is solved,” Mr. Horiuchi said, “urban voices will be heard.”

Advocates for rural areas say that if representation were allocated strictly by population, Japan’s remote areas might deteriorate further, an argument that some political scientists agree has merit.

Given the connection between representation and public funding, said Yuko Kasuya, a professor of comparative politics at Keio University in Tokyo, “one counterargument would be that, OK, you might have a very efficient, equal distribution of subsidies, but that would mean rural areas do not have roads, do not have shopping malls and do not have basic facilities.”

Still, Japan’s courts, when presented with legal challenges to the malapportionment, have been narrowing the disparities in recent decades.

Hidetoshi Masunaga, a lawyer who has led the court fight, argues that “building an election system that can properly reflect the will of the people is an urgent task.” Yet he said urban voters who might stand to gain from changes to the system are often unaware of the electoral inequities. “People don’t know,” Mr. Masunaga said, “so people don’t think it’s unfair.”

One night this week in the Adachi ward of Tokyo, the most densely populated district in the country, few residents seemed interested in either of two candidates — one from the Liberal Democratic Party and another from the opposition Constitutional Democratic Party — who were campaigning near train stations.

Yuta Murakami, 36, an accountant for a cosmetics distributor, said that he was aware of the differences between urban and rural districts but that he was more concerned about low voter turnout in Tokyo.

“The bigger issue is just getting people to go to the polls,” Mr. Murakami said after he had given the opposition candidate a fist bump outside a supermarket.

In the last election for the lower house of Parliament, in 2017, less than half of registered voters in the Adachi district voted. In Chizu, 63 percent cast votes.

People are protective of their voting rights in Chizu. Many residents feel a personal connection to Shigeru Ishiba, a former defense and agriculture minister who has represented Tottori Prefecture in the lower house for 35 years and who grew up in a town close to Chizu.

“We expect so much of him and rely on him,” said Satoko Yamane, 62, the owner of a clothing store featuring racks full of knitwear for women of a certain age. “Rural people have their own issues that urban people don’t understand. Even if the population is small, our voices should be heard.”

At an evening campaign stop last week in Yonago, one of Tottori’s larger cities, Mr. Ishiba stood atop a white van and addressed a group of about 40 people in the rain.

“Japan should not be a place where the population keeps declining and people only move to Tokyo,” Mr. Ishiba shouted. “We need to maximize the powers of agriculture, fishery, forestry, tourism, service industries, and small and medium size companies in this area.”

The region has already lost a representative in the upper house of Parliament, after Tottori Prefecture merged with neighboring Shimane under a 2015 redistricting plan that assigned one lawmaker to both prefectures.

In the lower house, two lawmakers still represent Tottori. At one time, recalled Yoshiichi Osaka, 85, a barber who still gives daily haircuts in Chizu, four lawmakers from Tottori served in the Diet, as Japan’s Parliament is known. “It was good to have four places to go when we wanted to ask for help,” Mr. Osaka said.

The $21 million upgrade gave the 134 students enrolled in the middle school a computer lab, tennis courts, a music room stocked with instruments, two courtyards and a gym with four basketball hoops and a large stage. On a recent afternoon, ninth graders rehearsing for a choral recital were dwarfed by the ample space and vaulted wood ceilings in the gym.

A handful of newcomers, too, have benefited from generous government subsidies. Itaru and Mariko Watanabe, originally from Tokyo, moved to Chizu in 2015 to start a bakery, brewery and cafe in an abandoned nursery school building amid rice paddies on the edge of town.

Mr. Watanabe, 50, said government grants covered half of their machinery costs, and now Ms. Watanabe, 43, and two other business partners are converting an elementary school next door into a hotel, with public money footing the renovation bill.

Ms. Watanabe said she had noticed a sense of groupthink in local voting patterns. “The people who were born and raised here have connections with relatives or other residents,” Ms. Watanabe said, and they tend to vote in tandem.

On a recent morning at the newly built library, Asami Kagohara, 25, a single mother of a 5-month-old son she was rocking in a carrier on her chest, said she and her parents always voted together — for Mr. Ishiba.

“I feel like he protects us,” Ms. Kagohara said.

Motoko Rich and Makiko Inoue reported from Chizu, and Hikari Hida from Tokyo.