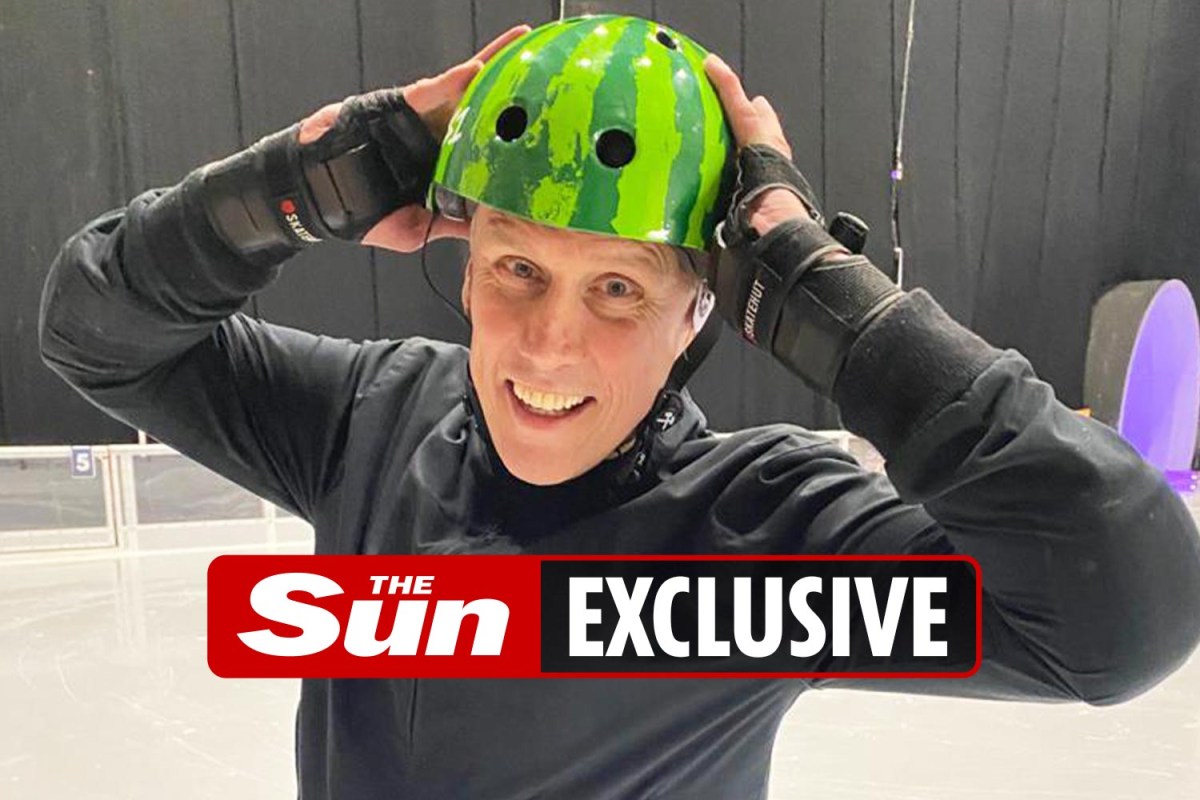 HE shot to fame dancing with Happy Mondays – but c is terrified of falling flat on his maracas when he tries to make a move in Dancing on Ice.

In training, the Nineties icon has proved so ­accident-prone he will become the first contestant to wear a HELMET in his debut on Sunday night.

But Bez is making the most of the situation with a helmet decorated like a melon — a reference to the Happy Mondays lyric: “You’re twistin’ my melon, man.” That comes from perhaps their most popular track, Step On, to which Bez will perform.

The dancer and 2005 Celebrity Big Brother winner, 57, admits he is “absolutely rubbish” on the ice.

He said: “I feel such a . . . but I know why they want me to wear it. I’ve fallen that many times and hit my head on the ice, it wouldn’t do to be seen on live TV with splattered head all over the telly.

Bez has spent weeks training with skate partner Angela Egan, 34, and has tried his best to prove he’s capable of taking to the ice when the show returns this weekend.

But after a number of nasty tumbles — including one where he hit the ice so badly his helmet flew off — he must make the best of a bad situation.

‘Better than than blood and gore everywhere’

Bez, real name Mark Berry, said: “I was hoping to get good enough not to wear my helmet. But they’ve got me a melon helmet to wear. It should be quite funny to see me skating around with that on.

“Better that than a watermelon getting squashed badly, with blood and gore everywhere. I don’t think that’d go down well on live TV. I don’t want to give too much away but definitely there’s going to be some maracas involved somewhere. I’m pulling all the big guns out on my first dance.

“I’ve had some spectacular falls. I wear every pad you can imagine. I’ve got a helmet on, elbow pads, knee pads, wrist guards. I’ve even got a new pad for the bottom of my back as well. But I still find a new place to fall where I haven’t got a pad.”

Find all the latest updates from Dancing On Ice with our live blog...

So far, Bez has thankfully avoided a major injury. But he added: “I’ve got a double groin strain at the moment, practising a new manoeuvre. But I’ve got a Brazilian bum coming on! It’s getting really nice now — a curvy bum I’ve never had before. I’ve banged my knee quite hard. I’ve got an elbow bruise.”

Though a novice on the ice, Bez knows reality TV inside out. He appeared on Celebrity Big Brother primarily to pay off tax bills and has followed that with stints on Adrenaline Junkie, Bargain Hunt and, last year, Celebrity MasterChef.

Despite his enduring popularity, this time Bez is looking to move beyond his comedy public persona. He said: “I’m trying not to be — but oh, I am the Frank Spencer of the show. I don’t know if you remember when he went to the roller rink (in Some Mothers Do ’Ave ’Em)?

I’m hoping — this is my biggest wish — that I can stay on my feet for one minute and 30 seconds and finish my routine.

“I am definitely the Frank Spencer of the moment. I try not to be, though. I felt yesterday that I actually made some big steps and improved a lot. But it’s been really different learning a new skill — and especially a skill that I’ve never done as a child, so it’s all brand new to me.

“I found it a lot harder than I thought it would be. I’m hoping — this is my biggest wish — that I can stay on my feet for one minute and 30 seconds and finish my routine. At the moment I’ve not managed it without falling over, so that is my main driver.”

Bez’s friend and Happy Mondays frontman Shaun Ryder will be in the audience tomorrow at the studio in Hertfordshire. Their former bandmate Rowetta Idah intended to join but has had to stay at home with Covid. Shaun helped form Happy Mondays in 1980 in Salford, Gtr Manchester.

Bez came on board as a dancer and percussionist, then teamed up with Shaun again for his next band, Black Grape. They have remained great pals throughout.
Bez said of his mate: “He’s so biased. He’s always saying, ‘Bez, you’ve got to win it’. He’s really funny, Shaun. He’s so supportive.

“And he’s always convinced I’m going to win, for some mad reason. The melon helmet will bring a big smile to his face. And Rowetta’s been really supportive, too. I’m really happy to be involved, to get a chance to have really good fun and make a bit of money at the same time. It’s not every day you get that opportunity.”

‘We laugh so much’

Holly Willoughby and Phillip Schofield are back as hosts along with judges Jayne Torvill, Christopher Dean, Ashley Banjo and newcomer Oti Mabuse, of Strictly fame.

She replaces John Barrowman, who was axed amid allegations that he regularly exposed himself to cast members while working on the set of Doctor Who. Bez said: “I’ve met most of the people before but we don’t really get a lot of time to hang out with each other. But everyone’s really good fun. Brendan’s always got good banter when you see him.

“Kye is great, he’s a great sportsman. Stef is amazing, as well. With the disability she’s got, to be able to do what she does — it just blows me away. And of course I get along with Sally. I love Sally.”

But Bez added: “Because of the Covid restrictions, there’s really nothing going on behind the scenes. We’re not allowed to mix or see much of each other, so you’re spending a lot of time on your own. So there’s been no backstage dramas — which is kind of sad — but I can understand why. They’ve got to make sure the show goes on. It’s very sensible backstage.”

“Sensible” is not a word often associated with Bez, who was known for his wild partying in the Nineties and has talked openly about his drug use. So does gliding over the ice remind him of a psychedelic trip?

Bez said: “I can’t even compare! I’ve actually been dreaming a lot. One of the things I dream about is gliding across the ice really gracefully, on one leg, backwards. Angela’s very patient with me. We laugh so much during the training, mostly at my mishaps.

“And she’s a Northern lass as well, so we kind of understand each other. She came to a Mondays show with (fellow Manchester band) James last year, she came along to one of the shows. We’ve had a night out in Manchester for a meal, so we’ve got on really great and become really good friends.”

I’ve actually been dreaming a lot. One of the things I dream about is gliding across the ice really gracefully, on one leg, backwards. Angela’s very patient with me.

At 57, Bez is one of the oldest celebrities to skate on ITV’s star-spangled rink. And he is realistic about his prospects of making the final. He said: “I’ve got no high expectations, unfortunately, because I’m that rubbish. But hopefully I can survive to the point where I don’t have to wear a helmet. That’d be a good moment for me.

“To learn that skill at 57 is a really difficult thing to do, but it’s got to the point now where I wish I could just stop falling over. I wish I could say, ‘Yeah, you’re going to see me doing the headbanger’. But I can’t tell you how rubbish I am.

“I’m absolutely rubbish at skating, you know, but the main thing is I hope to spread a bit of happiness and bring a smile to everyone’s face.”