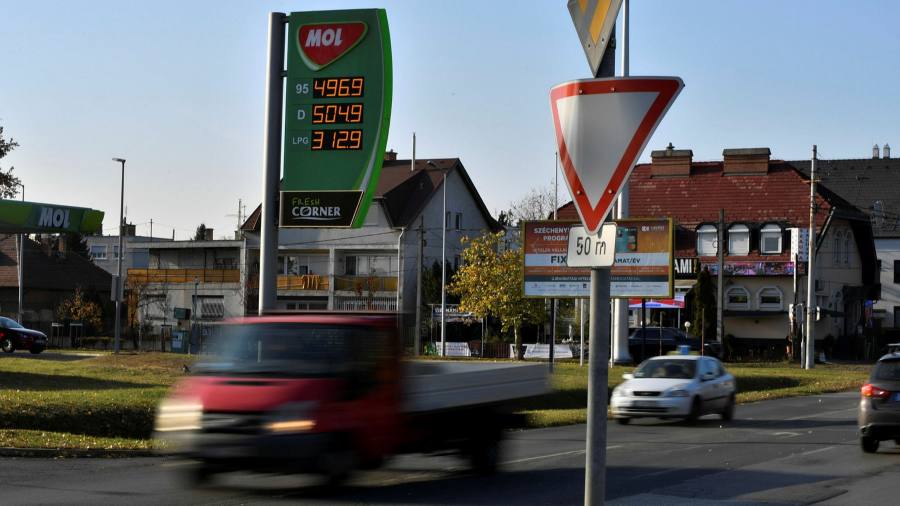 Hungary will cap the prices of petrol and diesel from Monday as the country tries to control rising inflation, prime minister Viktor Orban’s chief of staff said on Thursday, ahead of what is expected to be a closely fought election next year.

“We have made a decision: the price of gasoline and diesel cannot exceed 480 forints [€1.30],” Orban said on his Facebook page. The caps on petrol and diesel will last for three months.

European consumers have faced rising energy prices amid tighter supplies in recent months. Petrol prices in Hungary have hit records, climbing by about a third since the start of this year. Annual inflation has also crept up steadily despite a series of central bank interest rate increases, to reach 6.5 per cent in October.

The energy price caps will help Orban claim ahead of April’s elections that he is curbing inflation, analysts say.

“Fuel is a huge part of the inflation mix, and this quick move means that the lower prices will already show up in the November inflation reading, which can stay below an annual 7 per cent this way,” said David Nemeth, an economist at Hungary’s K&H Bank.

“Then from December onward it can help keep a constant lid on inflation, which also helps monetary policy. Of course the elections are also a factor as voters feel fuel prices acutely.”

Orban, who has often imposed tough measures on international businesses and challenged core EU policies, has employed energy price caps for a long time. Households in the EU member state pay a limited amount for natural gas and electricity and Orban has often said he will “stop the price increases at the border”.

Nemeth said energy price caps could become unaffordable for Hungary if market prices remained high in the medium term, but added that any revision was likely only after the elections.

Shares in Hungarian refiner MOL, which operates the country’s largest network of petrol stations and is the second-most liquid stock on the Budapest Stock Exchange, plunged as much as 6 per cent after the news, before stabilising at a 4 per cent loss for the day.

Lajos Torok, of brokerage Equilor, told national news agency MTI that the price cap could cost MOL as much as €120m-€180m, depending on global oil prices.

MOL declined to comment before details were announced on how the price reductions would be achieved. The government decree, which will come into force on November 15, is expected to be published on Friday.

According to the European Environment Agency, Hungarians already pay the second-lowest excise taxes on petrol and the fifth-lowest on diesel in the EU. They also paid less than the EU average at the pump: about €1.40 a litre vs an EU average of €1.66, said Eurostat.

The price cap would bring pump prices to the second-lowest level in the EU behind Bulgaria.

“Energy matters are in a bad shape in Europe,” said Orban’s chief of staff Gergely Gulyas, noting that natural gas prices had grown fivefold in a year while electricity prices had doubled. “This led to a utility price crisis that European countries, with the exception of Hungary, have been unable to avoid.”

Croatia introduced a similar fuel price cap in October, limiting the retail price of petrol and diesel to about €1.50 a litre. The decree was extended for a month on Thursday.