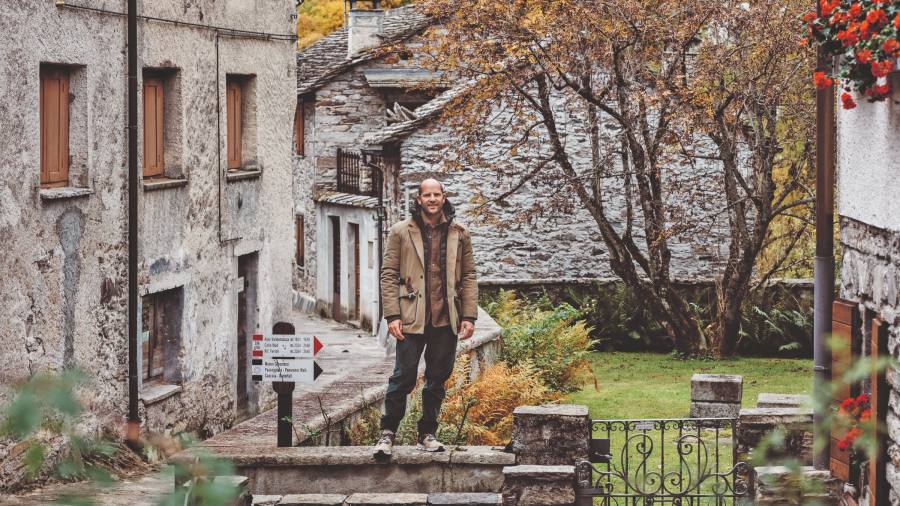 My Dutch-German grand-mother escaped to the Valsesia valley, near the Swiss border in the western Alps, in the second world war. It was here that she met my grandfather, Franco, a second-generation wool merchant and manufacturer. Together with their sons, Sergio and Pier Luigi, and my aunt, Lucia, they developed our family business, Loro Piana, in this authentic, rugged part of Italy. The area is my true home and where I lived until I went to university. I grew up skiing after school here, and it’s where I made my lifelong best friends. The setting is beautiful – in the shadow of Monte Rosa yet an easy escape from Milan and Turin – and the pace of life is slower and simpler. It’s also perfect for hardcore ski touring, mountaineering, ice climbing and biking.

The main Valsesia valley branches off into secondary valleys and in one lies the little village of Rima. My grandmother’s house – a typical stone and wood structure in the Walser style – still stands, and it is one of 50 or so original buildings. I spent my summers here hiking, swimming in the rivers and learning to sail in the nearby lake. Autumn is equally beautiful, with foliage that is so dramatic it’s like being in Japan. The mountainous trails are steep and challenging – regardless of the season – so whether you are deer hunting or climbing up for virgin powder runs, I highly recommend a guide to help navigate the challenging terrain.

Rima is magical and you can completely disconnect from the rest of the world; it’s one of the few places left that are so far removed. I love to stop by Ristorante Alpino (+39 347 416 0781) in the main piazza to eat la miaccia – flatbread stuffed with local Toma cheese and pancetta. On the way down the valley, stop at the restaurant Il Giacomaccio if you want a hearty dinner – they serve the area’s speciality, polenta with deer, as well as the local Travaglini wines.

I bought my first mountain bike here at Locca and love to ride the 100-mile trail almost year-round. It’s likely you’ll never run into anyone along the Balmuccia-Alagna trail that runs along the valley of the river Sesia. This is also a top-notch spot for rafting and fly fishing. In fact, Yvon Chouinard, the founder of Patagonia, came here to learn from local fly-fisherman Mauro Mazzo. He uses a very specific technique called Tenkara, using just a rod and a fixed line, and makes special reels. There are rustic, family-run places to stay nearby including Locanda Margherita in Rassa and the Ristorante Residence Giardini in Piode. But for real local colour, try one of the remote refugios – some are accessible only by helicopter. One of the most spectacular is the Margherita Hut, at 4,600m. You can hike up – it takes at least nine hours – and spend the night in Europe’s highest refugio, then ski down at dawn. For something a little more comfortable, try the chalet-style MH Cristallo.

On the west side of the valley, the village of Mera is set right on the slopes and reachable only by walking or by cable car. Sleeping on the slopes in a mountain hut is a unique feeling. I learned to ski here, and have had magical winter nights ski-touring with the full moon lighting the way. In the past few years, I’ve returned to ski touring and I like to hike up – with the deer, foxes, rabbits and birds – before descending from 2,000m at the top of the mountain down to the village that sits at 1,000m. After a full day of skiing, you can’t miss a sunset aperitivo on the slopes at Il Baretto (+39 328 908 9493) – just grab a beer and enjoy the majesty of the Monte Rosa, which sits right in front of you in multiple shades of pink.

Keep going up the valley, along the river Sesia, and you’ll find the towns of Scopello, Piode and Riva Valdobbia, all leading up to the main village of Alagna, where the road ends. Alagna is the most important ski area in the western Alps, with more than 95km of amazing slopes and a cable car that takes you up to the glacier at 3,000m. The area is known for its very technical, off-piste terrain that draws skiers from as far afield as Sweden and Norway.

Malfatta is one of the best lines here and a guide is a must for the 50-degree chutes. There are some legendary guides like Silvio Mondinelli, who has hiked up K2 and Mount Everest, but Guide Alpine Alagna will also find you an expert who knows every corner of this complicated terrain. The legendary La Balma is another favourite run for fresh powder on the glacier. For a nice ski break, stop at a slopeside hut called Der Shoppf (+39 348 330 7292) to enjoy local food and get some sun on the terrace. There’s also a little bar for the end of the day – Caffè delle Guide (+39 0163 923 209) – where the guides hang out. Or try Cà Nosta in the piazza for a simple dinner before heading to Da Mario (+39 0163 910 28) for an epic gin and tonic to end the night.

At the bottom of the valley is Lake Orta. It’s west of Lake Maggiore and about one-eighth the size of Lake Como, but there is still so much to do, including exploring the town of Orta San Giulio, which is full of piazzas and cafés but with few cars. Don’t miss a meal at Villa Crespi’s two-Michelin-starred restaurant, helmed by chef Antonino Cannavacciuolo – it’s worth booking well ahead.

In the middle of the lake is the Isola di San Giulio, an island that is home to a 12th-century basilica and a 19th-century monastery. One of the most amazing things here is the Sacro Monte di Orta (part of a Unesco World Heritage Site of 20 chapels) that has incredible frescoes and overlooks Lake Orta and the town.

This part of Piedmont is blossoming, with a new generation coming in and supporting growth. Like many regions in Italy, it is still under the radar, but its beauty and authenticity, as well as its proximity to the cities, makes it very special.