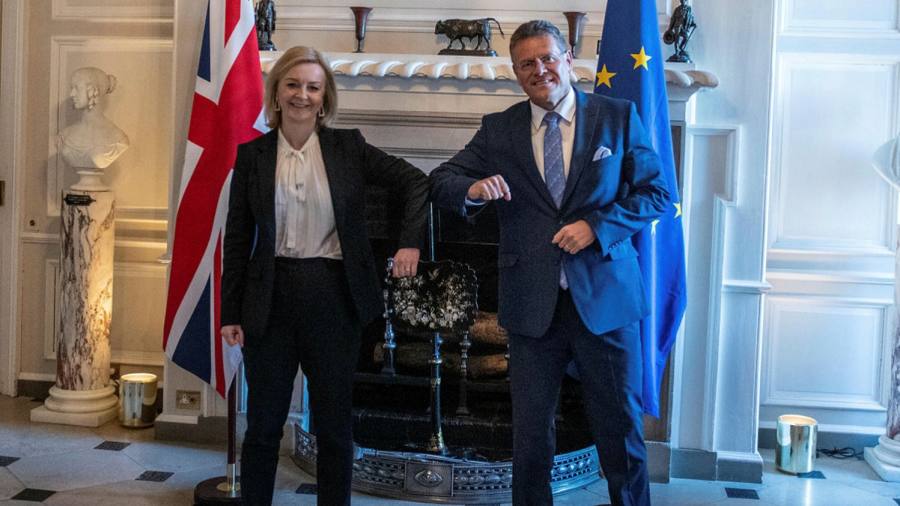 The new Brexit year has dawned with a faint whiff of disappointment hanging over the project, particularly from those who believed that leaving the EU would provide the springboard for a reboot of the British economy.

Lord David Frost’s resignation, citing the failure to grasp the opportunities of Brexit, precipitated a raft of articles bemoaning the lack of daring from Downing Street about the deregulatory agenda that many ardent Brexiters believe holds the key to a brighter future.

Outside the hardcore of political Brexiters, the wider public also has a sense that Brexit hasn’t quite delivered the promised benefits, with nearly 60 per cent telling the Ipsos Mori political barometer that they felt the government was making a “bad job” of the EU exit. (That includes people who think Brexit has been too hard and those, like Lord Frost, who think it hasn’t been hard enough.)

At the same time the apparently intractable stand-off over Northern Ireland rumbles on — negotiations start up again in earnest today — adding to the impression that the Brexit agenda is permanently stuck in the mud.

The difficulty facing the government is one of expectation management because, despite the impatience of Brexiters, when it comes to deregulation any benefits will inevitably take a long time to feed through to the real-world economy.

The government has also not helped its own case that a substantive dividend is realisable by trivialising the deregulation agenda with briefings to the pro-Brexit press about the return of Churchill’s favourite pint-sized Champagne bottles. This is hardly a strategy for being taken seriously.

Remainers may complain that the pot of deregulatory gold is always just out of reach at the end of the rainbow, but the truth is that Britain is still in the very early stages of its post-Brexit journey, with Covid-19 adding to a sense of interminable delay at the departure gate.

Indeed, as Joël Reland, of the UK in a Changing Europe think-tank observes, when it comes to tackling the stock of existing regulation, any drive to reduce current ‘red tape’ can often have the perverse consequence of increasing costs and bureaucracy, at least in the short term.

Reland, the author of the UKICE’s divergence tracker which recently published its second edition, gives the example of a new regime for medical devices — which is currently in gestation — that will create a new, British bureaucracy, even if it is lighter-touch.

“If you want your regulatory regime to govern medical devices, you still have to make that UK regime, with its bureaucratic processes, the requirement for companies to re-register products and for the UK regulator to become competent at doing what the EU regulator did before,” he said.

This is why the UK chemical industry is currently urging the government to think of a less onerous way to duplicate the EU’s Reach chemical regime, which it estimates will cost the industry £1bn.

And as we have seen with industry’s complaints about the decision to create a UK equivalent to the EU’s CE mark — the UKCA mark — deregulation and divergence also lead to the creation of a dual standards regime.

Complying with two regimes can cost and frustrate business more than it sets them free. As does the lack of capacity in so-called ‘notified bodies’ that issue certificates of conformity to industry. That too will take time and money to build up.

Public opinion can also be another obstacle to divergence. So while promises to “slash Brussels red tape” might draw a cheer, the public also rightly expects the kind of properly enforced regulation that, for example, prevents apartment blocks being covered in highly flammable cladding. Witness also the government’s hasty retreat last year from the suggestion it might look to change the rules bequeathed by the EU’s working time directive.

Fear of public opinion is also why the government is sometimes surprisingly shy about areas where it is actually engaged in post-Brexit deregulation — as in the case of hazardous chemical regulation that we reported on in some detail in December.

And yet as Reland and others have observed the hopes for a deregulatory dividend from Brexit are not without foundation, particularly on future industries where the regulatory framework is still to be set — for example artificial intelligence, gene editing and new areas of financial services like fintech and cryptocurrency.

But here too, patience and strategy will be required, because the asymmetries between the go-it-alone UK and the global regulatory weathermakers — the EU, the US and to a lesser extent China — is a permanent feature of post-Brexit Britain.

That is why you get differing opinions about how far the UK will profit from its non-EU status on these future areas of regulation.

Take artificial intelligence, an area where the UK is already ahead and potentially well-placed to prosper and attract greater investment relative to the EU, according to TechUK, the industry lobby group.

The EU published its AI regulatory framework last April, and the UK followed suit in October with its National AI Strategy promising a “progressive regulatory and business environment” to make the UK an AI innovation hub.

The industry is upbeat about the possibilities, but Reland is more cautious, noting that the UK regime — even if it is lighter touch and more enabling than a conservative and prescriptive EU regime — will always have to work alongside Brussels.

His view is that the so-called “Brussels effect” — where the gravitational pull of the EU market forces others to follow EU regulations — will still impact the UK, even if it looks to be more permissive for AI developers.

This is because EU rules will require that the underlying technology for an AI product developed in the UK but sold in the EU — he gives the example of a credit-scoring system — will have to conform to Brussels’ rule book.

He argues that “to a greater or lesser extent” the UK’s regulatory architecture will have to be built around norms set by the EU, or risk the demand for UK-developed AI products to “dry up”.

Not everyone in the industry is so sure. While Brussels will have its AI legislation out before the UK, it is likely to be more prescriptive — for example on areas such as facial recognition — which groups like TechUK believe will encourage high-end developers to come to the UK.

TechUK points to the level of investment in the UK — some £13.5bn poured into more than 1,400 UK private technology firms between January and June 2021, which is more than Germany, France and Israel combined — as early proof of concept.

Their belief is that high-end R&D can be done in the UK, often with US partners, and any products sold into the EU will have functions that are deemed illegal in the European Union removed or disabled prior to export.

It is not clear which version of the future will come to fruition. There will undoubtedly be some dividends, but as Reland says, they will be tempered by the Brussels Effect and will have to be netted off against the costs of leaving the EU single market, estimated as a 4 per cent long-run hit to UK gross domestic product by the Office for Budget Responsibility.

Remainers are often rightly criticised for overstating the immediate impacts of Brexit — warning of an exodus from the City; rising unemployment; collapsing trade — but equally Brexiters have also both overstated, and then mysteriously trivialised, the divergence dividend.

If the government really wants to shift the gloomy narrative currently growing up around Brexit, it should try to engage the public seriously about the potential and challenges that lie ahead. There is more to Brexit than pint bottles.

Do you work in an industry that has been affected by the UK’s departure from the EU single market and customs union? If so, how is the change hurting — or even benefiting — you and your business? Please keep your feedback coming to brexitbrief@ft.com.

Despite the hullabaloo over Downing Street parties, it is the threat of inflation and a looming cost of living crisis that really haunts Boris Johnson’s premiership as we head into the second half of this election cycle.

One idea mooted recently, reportedly with the support of Lord David Frost, was that the UK should cut import tariffs on all but the most sensitive products in order to help British shoppers and boost the economy.

But would it? To the point about needing to engage with the real world, this is a retread of a Brexiter idea that did the rounds in 2017 thanks to a paper by Patrick Minford of the Economists for Free Trade group asserting that unilateral free trade could boost UK GDP by 4 per cent.

The idea was debunked at the time by the vast majority of economists and trade experts and dismissed as a “dangerous fantasy” by the FT’s own Martin Wolf. It is somewhat depressing, to put it mildly, that the idea is being reheated in some more fevered Brexiter imaginations.

As Michael Gasiorek, professor of economics and director of the UK Trade Policy Observatory (UKTPO) at the University of Sussex, observes, such a move would make very little overall difference to UK prices because most of the country’s imports already enter duty free (see chart).

A few years ago the UKTPO produced a report with the Resolution Foundation which modelled the impact of unilateral tariff liberalisation and concluded that across those goods affected by the tariff-cuts, prices would fall by just 1 per cent.

More broadly, adds Gasiorek, when faced with an economic issue the best policies are ones that address that problem as directly as possible — in this case a cost of living crisis driven by rising energy prices, a supply chain crunch and the increased costs of importing from the EU because of Brexit.

As he concludes: “Reducing all import tariffs does not address these problems and is not the appropriate policy here.”

The impact of Brexit on the City is a topic we have covered in this briefing before. This week my colleagues in the financial services team took a forensic look at the consequences of the UK’s departure from the EU. “Rather than experiencing a big bang shift . . . the City is enduring a slow puncture,” they write.

In the 2016 referendum campaign the Common Agriculture Policy was regularly touted by supporters of the UK’s departure from the EU as an example of Brussels’ financial mismanagement. But a damning parliamentary report this week said the government had failed to establish how the £2.4bn of annual payments that will replace the CAP subsidies to British farmers will provide value for money. Read more on the report’s findings.

In September 2019, the Austrian parliament approved an amendment to the nationality act. Those eligible — people persecuted under the Nazi regime and their direct descendants — could apply for citizenship once it came into effect on September 1, 2020. “I had never imagined becoming Austrian, until Brexit,” writes Sarah Ebner as she describes the mixed emotions associated with becoming the owner of a new European passport.