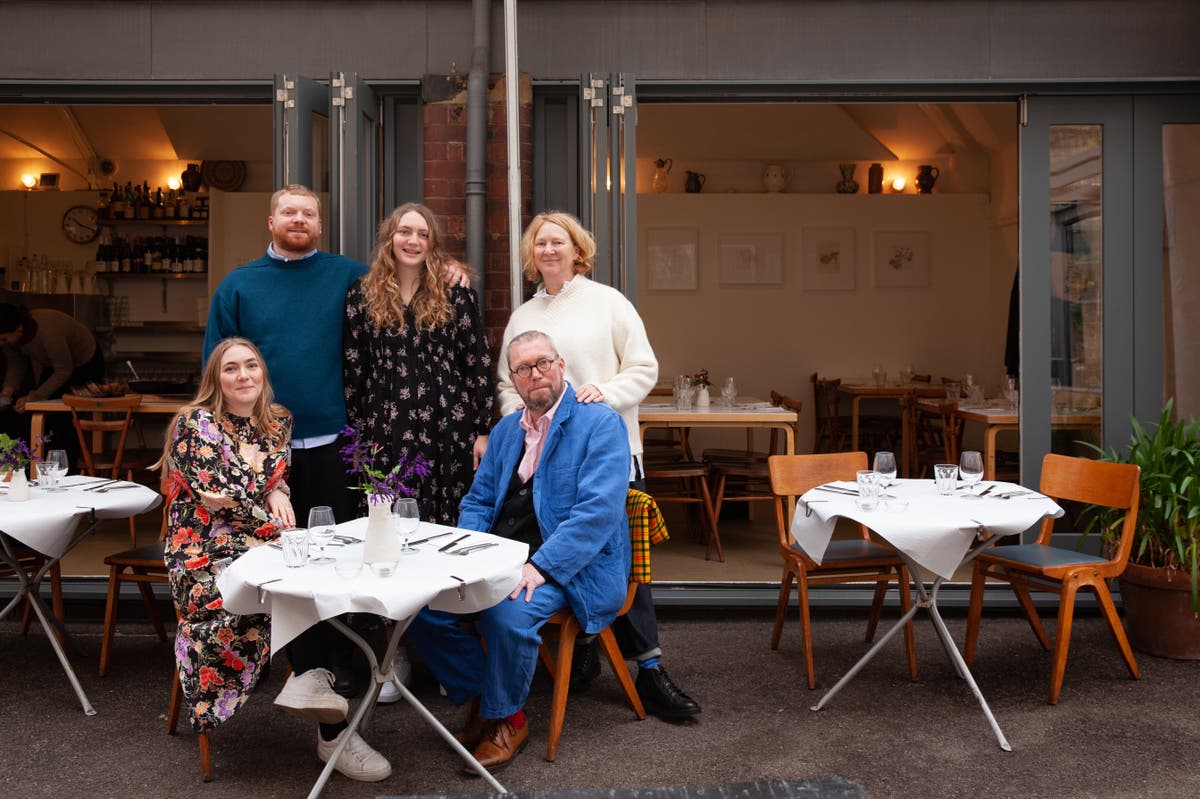 Quieted by Parkinson’s, he has a way with his eyebrows. He telegrams when he glances. Both are in use now as his wife, Rochelle Canteen star Margot Henderson, begins to unbutton his collar. ‘Otherwise they’ll think you’ve forgotten your tie!’ she teases. Fergus looks beyond baffled. Around them, the couple’s three children — son Hector, 27, and daughters Owen, 26, and Frances, 22 — giggle. The Rochelle Canteen grass is white with frost; on the paths, puddles stubbornly stay as ice. ‘Come on, get them off,’ Margot says, gesturing to Owen and Frances’ sweaters, ‘Otherwise people will think we’re one of those…’ — she screws up her nose — ‘jumper families.’ Giggles again, until the pair realise their mother isn’t joking. Breath turns to mist. Margot has her family ready for their portrait.

‘Mum’s the leader!’ Frances says as soon as the photographer is done, breakfast is complete — Margot, an instinctive, generous host, is sure to insist — and all five of them are sitting on long benches. ‘Oh, 100 per cent,’ laughs Hector. There is a lot of laughter with the Hendersons; they are that kind of family. ‘We’re pretty normal,’ says Margot. ‘Maybe a bit chaotic, sometimes. Drink can feature.’

The five do a decent job insisting everything is all very ordinary, really, which isn’t really true at all. I have met them once as a group before, only in The Groucho, with Negronis instead of coffee. Do they normally party together? ‘We just want to know what they’re up to all the time!’ says Frances of her parents. ‘Their plans are normally more fun than ours.’

‘We don’t have parties all the time,’ grins Margot, drawing out the ‘all’ to twice its length, ‘but sitting around the table, eating food, talking: it’s been a great way to keep us close.’

Food, then, is unsurprisingly the theme of this family. Fergus and Margot married in 1992, now attributing their longevity to enormous reserves of both love and patience (‘Thrown clocks can feature,’ notes Fergus, drily). At the time they ran the dining room upstairs at the French House in Soho. Hector, born in 1994, came six months before Fergus left to open St John; Margot teamed up with Melanie Arnold — the partnership endures — and stayed on at the pub. ‘Of course I was always a bit upset that I wasn’t…’ she starts, ‘I mean Fergus and I started cooking together, we were partners…’ She doesn’t say anything more. Still, she is sanguine: ‘It would have been impossible for me, I was too wrapped up in being a mother.’

With the family then living in a flat in Covent Garden, the pub and its Soho surrounds were the children’s playgrounds. Is it true, I ask, whether baby Hector was really left under the pub kitchen counter in a box of leeks? It is. ‘A box of leeks seems a very appealing place to rest,’ says Fergus, with a sideways look.

‘They all came to work with me every day before school while I’d chat with the chefs,’ says Margot. ‘There were always knives and all sorts around…’ — she giggles — ‘but they were so all so used to it all…’ Besides the pub, she says, ‘Bar Italia saved me! I’d go there at 7am and because they loved you, they’d look after you.’

‘They were great parents,’ says Hector. Frances nods: ‘Completely. We were very spoiled with restaurants growing up.’ An eye roll from Margot: ‘I’m not sure that makes us great parents…’

Owen recounts a childhood spent in Ciao Bella, St John, Jade Garden, Dumplings Legend. On each of their 12th birthdays, Fergus took the children out to somewhere special: Hector had lunch at Le Gavroche, complete with wine. He returned the favour by taking dad to a Foo Fighters concert; ‘He walked out after 10 minutes.’

Frances went to Dinner by Heston, while Owen was taken to The Fat Duck. ‘That’s where I learnt I liked my foie gras roasted.’ Naturally. It wasn’t all fine-dining — ‘I think they were all half Pizza Express at one point,’ says Fergus — though Margot says they were constantly around restaurants and eating. ‘I think my favourite moment was seeing them all lined up in a row at St John, little kids eating their langoustines perfectly, and sucking the heads!’ She looks warmed by the memory.

Exposed to food, if not their parents’ celebrity — ‘Once in Paddington station someone came to ask for Dad’s autograph and I was like: “What the f***?”’ says Owen — was a culinary career ever pushed on them? Not really, they insist, though they always helped out. ‘All of us always did catering with mum, we always were waiters and washed the dishes from about 14, 15,’ remembers Hector. That accounts for why the three slip between calling their parents mum and dad and Margot and Fergus, explains Frances: ‘Obviously it would be a bit strange to call her mum during service.’

The trio did, however, often cook with their parents: Margot more hands-on, Fergus offering instructions. Hector is most obviously aligned with his parents, working as a sous chef in Rochelle Canteen and partnering with his mum for Margot’s Pride on a range of sandwiches they’ll sell in the West End early next year. ‘The opportunity came up and I thought: I know who’d make a great team,’ smiles Margot. ‘We’re in the family business.’ Their tastes are different, says Hector, but neither will be drawn on what they’ll serve. ‘Er, ham and cheese?’ teases Margot.

Frances, meanwhile, works in food PR and Owen is training as an accountant. I suspect there is a broader masterplan. ‘From a business point of view, I think it’s helping me really understand the way restaurants work,’ admits Owen. It’s the same for Frances: ‘For me, it’s interesting to learn another side of the food world.’

The trio have all the bases covered, then, I say: the business end tied up, a know-how for marketing and a chef in the kitchen. Do they see themselves as heirs to St John and Rochelle?

‘Oh, no — I think we see ourselves as doing our own thing one day,’ says Frances. ‘When we all hang out and get a bit drunk we’re like: one day we’re all going to open a restaurant together!’ bursts out Owen. Margot, ever watchful, gently warns them not to say too much.

Margot is not the type to slow down — as well as the sandwiches, next year a Somerset pub is planned in partnership with art dealer Max Wigram, The Three Horse Shoes — and it seems she is leading from the front. Both her and Fergus picked up OBEs this year for services to the culinary arts. ‘Always nice to have a pat on the back,’ says Fergus; a beaming Margot thought it was a scam, until ‘a friend went: “Oh yeah, that famous OBE scam…”’

The children watch on, rightly proud of their parents. This runs vice versa, and there is a feeling that, as the three siblings find their footing, mum and dad will be there as much or as little as wanted. I leave them squabbling playfully about where to go for a family lunch. ‘We never get Mondays off all together,’ says Margot, pleased. Is that why they agreed to the interview? More laughter. They’re that kind of family.