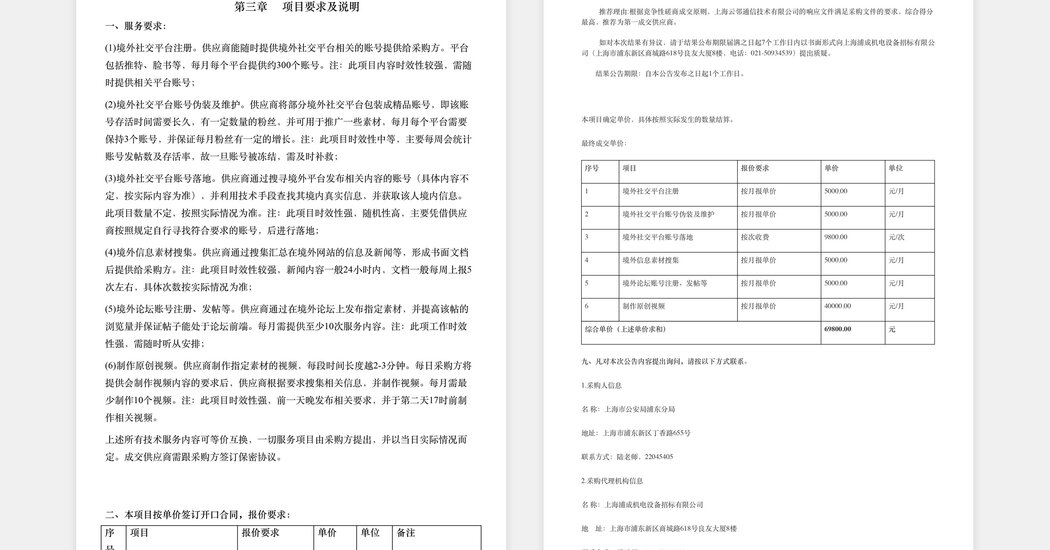 A list of services and costs itemized in Chinese renminbi from a private contractor that won a bid to work for a branch of the Shanghai police department. • Note: English translation by The New York Times from original Chinese document text.

Flood global social media with fake accounts used to advance an authoritarian agenda. Make them look real and grow their numbers of followers. Seek out online critics of the state — and find out who they are and where they live.

China’s government has unleashed a global online campaign to burnish its image and undercut accusations of human rights abuses. Much of the effort takes place in the shadows, behind the guise of bot networks that generate automatic posts and hard-to-trace online personas.

Now, a new set of documents reviewed by The New York Times reveals in stark detail how Chinese officials tap private businesses to generate content on demand, draw followers, track critics and provide other services for information campaigns. That operation increasingly plays out on international platforms like Facebook and Twitter, which the Chinese government blocks at home.

The documents, which were part of a request for bids from contractors, offer a rare glimpse into how China’s vast bureaucracy works to spread propaganda and to sculpt opinion on global social media. They were taken offline after The Times contacted the Chinese government about them.

A notice posted online in May calling for bids from contractors.

On May 21, a branch of the Shanghai police posted a notice online seeking bids from private contractors for what is known among Chinese officialdom as public opinion management. Officials have relied on tech contractors to help them keep up with domestic social media and actively shape public opinion via censorship and the dissemination of fake posts at home. Only recently have officials and the opinion management industry turned their attention beyond China.

Shanghai police is looking to create hundreds of fake accounts on Twitter, Facebook and other major social media platforms. The police department emphasizes that the task is time sensitive, suggesting that it wants to be ready to unleash the accounts quickly to steer discussion.

Bot-like networks of accounts such as those that the Shanghai police wants to buy have driven an online surge in pro-China traffic over the past two years. Sometimes the social media posts from those networks bolster official government accounts with likes or reposts. Other times they attack social media users who are critical of government policies.

Recently, Facebook took down 500 accounts after they were used to spread comments from a Swiss biologist by the name of Wilson Edwards, who had purportedly written that the United States was interfering with the World Health Organization’s efforts to track the origins of the coronavirus pandemic. The Swiss embassy in Beijing said Wilson Edwards did not exist, but the fake scientist’s accusations had already been quoted by Chinese state media.

Disguise and maintain overseas social media accounts. Suppliers should package a portion of the overseas accounts into a group of premium accounts, that is, accounts that survive for a long period of time, have a certain number of fans, and can be used to promote information. Each month on each platform three accounts must be maintained, and an increase in fans must be guaranteed each month. Note: this project has intermediate time sensitivity. Each week, the number of posts and survival rate of accounts will be calculated. If an account is suspended, it needs to be fixed in a timely fashion.

The Shanghai police’s social media effort is not just a numbers game, and this portion of the document underscores efforts to shift from brute-force tactics like using bot armies to something more subversive.

The police department is seeking an upgrade in sophistication and power: a series of accounts with organic followers that can be turned to government aims whenever necessary.

The request suggested that police officials understood the need for strong engagement with the public through these profiles-for-hire. The deeper engagement lends the fake personas credibility at a time when social media companies are increasingly taking down accounts that seem inauthentic or coordinated.

Bot networks that have been linked to China’s government stand out for their lack of engagement with other accounts, disinformation experts say. Though they can be used to troll others and boost the number of likes on official government posts, most of those automated accounts have little influence individually since they have few followers.

Touch the ground for overseas social media accounts. Suppliers search for accounts on overseas platforms that publish certain content (the specific content may vary, subject to actual content). Use technological means to find an account’s real information in China and obtain the user’s information in China.

The authorities used a phrase common among China’s internet police that refers to tracking down the actual person behind a social media account: “touching the ground.”

With growing frequency, the country’s internet police has hunted down and threatened internet users who voice their opinions. At first, its agents focused on local social media platforms. In 2018, they began a new campaign to detain users of Twitter inside China — account owners who had found ways around the government’s blocks — and force them to delete their accounts.

Now, the campaign has extended to Chinese citizens who live outside of China. The document spells out how the Shanghai police wants to discover the identities of people behind certain accounts and to trace their users’ connections to the mainland. Its officers can then threaten family members in China or detain the account holders when they return to the country in order to compel online critics to delete posts or even entire accounts.

The supplier should publish designated content on overseas forums. They should increase the number of views of the post and ensure that the post appears at the top of the forum. The service should be provided at least 10 times per month.

In previous Chinese information campaigns, bot-like accounts have been used to add an unrealistic number of likes and retweets to government and state media posts. The contrived flurry of traffic can make the posts more likely to be shown by recommendation algorithms on many social media sites and search engines.

In recent weeks, a similar pattern emerged from a network of bot-like accounts amplifying evidence that was issued by state-media journalists, purporting to show that tennis player Peng Shuai was safe, freely eating dinner in Beijing and attending a youth tennis tournament.

The Shanghai police explains very clearly the functionality that the department desires, demonstrating a familiarity with recommendation algorithms on social media. Its approach underscores something that propaganda officials know well: A cluster of junk accounts can briefly make one post from an official account appear to go viral, giving it greater exposure and lending it credibility.

The supplier should produce videos about specified content. The length of each video is about 2-3 minutes.

As overseas Chinese propaganda campaigns have developed, they have come to rely more on visual media. Officials are looking for a company to not only maintain and deploy fake accounts, but to also generate original content. The demand for videos is high.

A separate document reviewed by The Times shows that the same local branch of Shanghai police purchased video-making services from a different company in November. The police asked the supplier to provide at least 20 videos a month and to distribute those on domestic and overseas social media. The document referred to the task as original video production that would be used to fight the “battle of public opinion.”

Earlier this year, a New York Times and ProPublica analysis showed how thousands of videos portraying members of the Uyghur ethnic minority living happy and free lives were a key part of an information campaign that Twitter ultimately attributed to the Chinese Communist Party. When Twitter took down the network behind those posts, it took down accounts linked to a contractor that it said helped shoot propaganda videos. A Twitter spokesperson declined to comment.

Three weeks after the Shanghai police department’s request became public, a company called Shanghai Cloud Link won the bid, the documents show. In its pitch, the company listed itself as having just 20 employees. According to the LinkedIn page of its founder, Wei Guolin, the company works with multinational firms and provides services in “digital government” and “smart cities.”

Work like what Shanghai Cloud Link pitched is likely just the tip of the iceberg. Local governments and police across China have put out similar requests for services to influence overseas social media, but often in vague terms. Occasionally, specifics are revealed. In 2017, for instance, the police in Inner Mongolia purchased software that allowed government trolls to post directly to multiple social media sites, inside and outside of China, according to documents reviewed by The Times.

In another case, a contractor had downloaded hundreds of access credentials for Facebook’s public feed, allowing it to collect data about who commented on which posts and when. Facebook did not immediately comment.

Shanghai Cloud Link’s winning bid offers a window into how much some of these types of disinformation services can cost.

A pricing table from Shanghai Cloud Link’s winning bid, which lists costs in terms of Chinese renminbi. As of Sunday, 6.4 renminbi equaled $1.

In many cases, tech contractors seek to sell Chinese authorities the hardware and software outright. In this case, Shanghai Cloud Link’s proposal hinted at a new service-based model, one in which officials pay on a month-by-month basis — a sort of subscription for social media manipulation.