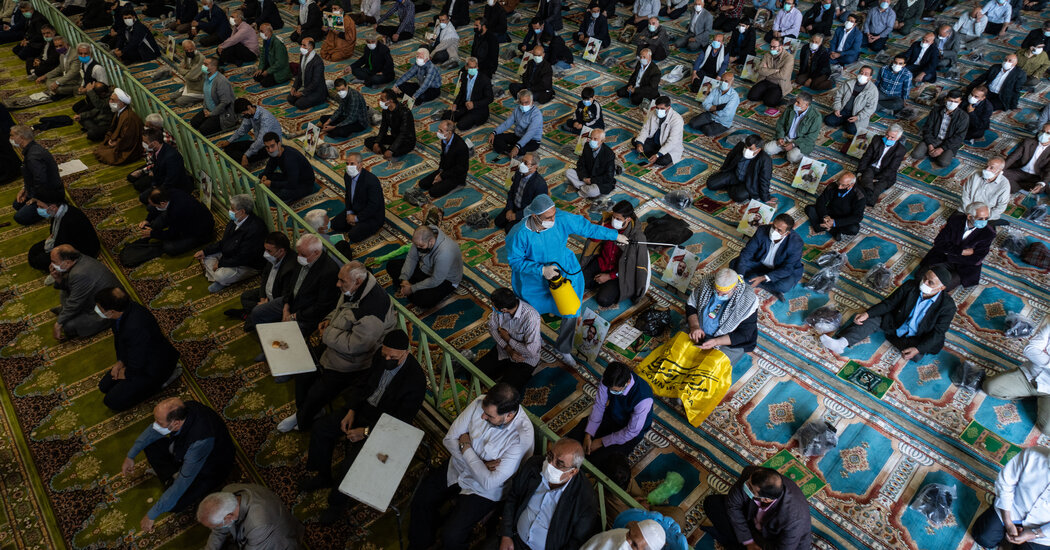 Two Iranian lawyers and a civil rights activist were among a group organizing a legal challenge to Iran’s top leader and the government over their disastrous handling of the pandemic.

But before they could even file their complaint, they were seized and incarcerated.

Now known on Iranian social media as “the health defenders,” their case has attracted widespread attention, even though their trial in Tehran is not open to the public.

“We were still discussing the complaint and what to do when 15 intelligence agents from the judiciary violently broke into the office and arrested us,” the civil rights activist, Mehdi Mahmoudian, said in a phone interview from Tehran’s high-security Evin prison, where he is being held along with his co-defendants, lawyers Mostafa Nili and Arash Kaykhosravi.

“We were held in solitary confinement with no access to lawyers, telephones or family visits for nearly a month in an illegal detention wing of Evin that belongs to the judiciary,” he added. Mr. Mahmoudian said he and others had received phone calls from intelligence agents beforehand asking them to cancel the meeting, a tipoff that they were under surveillance.

Mr. Mahmoudian was among a group of nine Iranian lawyers and civil rights activists who had gathered in a Tehran office one afternoon in August to discuss a draft of a lawsuit they planned to file against the country’s top officials. He said they had been planning to sue Supreme Leader Ayatollah Ali Khamenei and the government on charges of mismanaging the pandemic and hampering the vaccine rollout with a politically motivated ban by Mr. Khamenei on importing vaccines made in the United States and Britain.

Hadi Ghaemi, the director of the independent Center for Human Rights in Iran, an advocacy group based in New York, said the planned lawsuit was one example of a movement taking shape across Iran to demand accountability from public officials and justice for a range of offenses, from the killing of protesters, the torture of political prisoners and the deaths attributable to delays in delivering Covid vaccines.

“These lawyers were really the voice of a society that was outraged at the Covid situation and they wanted to put this on the map by filing this lawsuit,” he said.

From the onset of the pandemic, Iran has treated independent releases of information about it as a crime and a matter of national security. In the early months, for example, authorities banned health care workers and doctors from discussing the real number of hospitalizations and deaths.

Health Ministry officials involved with pandemic policies have said publicly that they were interrogated regularly by intelligence agents.

Iran had already been ravaged by the coronavirus by the time of the meeting in August, and the country was in the midst of yet another intense wave of outbreaks and deaths. The group of lawyers and activists debated whether to name the supreme leader in their lawsuit, according to Mr. Mahmoudian.

Some of those present favored the idea because Ayatollah Khamenei had issued the vaccine ban, delaying Iran’s mass inoculation by months. But others opposed it, arguing it would make the case too sensitive.

Mr. Mahmoudian and the two lawyers have been detained for the past four months in Tehran’s notorious Evin prison, the central site in the country for holding and torturing political prisoners. Branches of the intelligence service, from the judiciary to the Islamic Revolutionary Guards Corps., control their own wings at Evin, where the prisoners are kept in solitary confinement. He managed to evade prison restrictions and speak to a reporter by phone a week ago.

The three are charged with spreading propaganda against the state and disruption of public order in a trial that began in late October in Tehran’s Revolutionary Court — a special court for political cases and political prisoners. They are also charged with forming and belonging to an enemy organization — a reference to a human rights group they established called “Citizens Rights Protection Association.” If convicted, they could each face up to 10 years in prison.

A statement last week by a group of international rights organizations, including Human Rights Watch and PEN America, called for their immediate release and asked the United Nations to raise their case with Iran’s government.

“They are completely innocent,” said Saeed Dehghan, an Iranian human rights lawyer, who knows the detainees and has worked with them on other cases.

Iran’s U.N. mission did not respond to questions about the three prisoners.

During the raid, the intelligence agents demanded that all nine people present — seven lawyers and two activists — sign a statement pledging to drop the lawsuit. Some agreed and were allowed to leave.

Five were arrested but two were released on bail.

Mr. Mahmoudian is currently serving a four-year prison sentence in connection with a previous charge that was suspended until his arrest in August: He had asked the public to light a candle in memory of the Ukrainian Airlines jet downed by the Revolutionary Guards in January 2020. Iran said the missile fire that had destroyed the plane, killing 176 people, was a mistake.

In the months since the raid, Iran has progressed in its vaccination campaign. As of this week, Iran reports that 50 million of its 85 million people have received two doses of vaccine, according to state media.

But with the Omicron variant spreading rapidly across the world, Iranian health officials are encouraging the public to get booster shots to increase their defenses against the new strain. And in this sense, Iran may once again find itself behind the curve: Only about 2 million people have received a booster shot so far, according to the health ministry.

Many in Iran have questioned whether top officials deliberately held off on importing vaccines during the tenure of former President Hassan Rouhani because of political infighting between his more centrist government and the conservative camp within the ruling system, which is aligned with Mr. Khamenei, the highest authority in the land.

For its part, the government has blamed the delays in vaccine imports and other pandemic-related problems on sanctions and it has lobbied to get the billions of dollars in oil revenues that have been frozen under the U.S. sanctions released to pay for vaccines through the Covax initiative.

But crackdowns on civil liberties under Mr. Raisi, who has a dire record of human rights violations, have intensified, rights groups and lawyers say. The government is facing almost weekly protests around the country over a range of grievances, from farmers angry over water resource mismanagement to a teacher’s union striking over wages. It has responded with an iron fist.

The trial of the “health defenders” trio has hit a nerve with many activists, ordinary Iranians and even international organizations who are asking: If lawyers can’t seek justice in the Islamic Republic within the framework of the constitution, then who can?

In November, more than 500 human rights defenders and activists signed a petition demanding the release of the three jailed men and said their ongoing detention violated fair trial guarantees under Iran’s constitution.

In October, the three men arrested in August published an open letter from prison declaring their intention to sue Mr. Khamenei and the former president, Mr. Rouhani as well as the former health minister and members of the country’s coronavirus task force.

“We created our organization with the intent that if a person’s rights are being violated, we could step in and react,” Mr. Mahmoudian said. “But right now, they are not allowing any of us to even defend ourselves in court.”