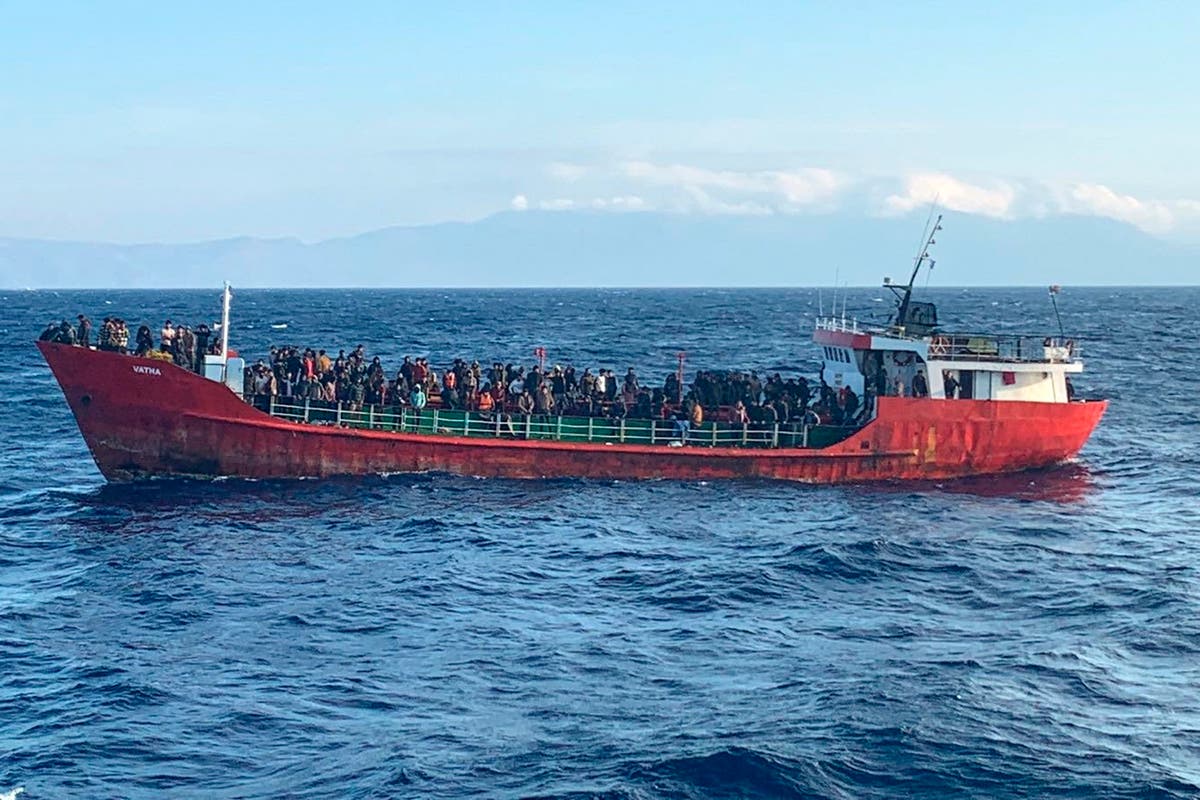 A small cargo ship with about 400 migrants on board that suffered engine problems in the eastern Mediterranean Sea off the island of Crete is being led to a safe anchorage in Greece, the Greek coast guard said Friday.

A coast guard statement said the Turkish-flagged freighter was located by a Greek search and rescue vessel east of Crete. Greek authorities had earlier been informed that the cargo ship was crippled and in need of assistance.

There was no immediate indication that anybody on board was in ill health. The nationalities of the passengers and crew were unknown.

“Right now, the important thing is to get the ship to a safe anchorage,” an official with knowledge of the operation told The Associated Press. The official spoke on customary condition of anonymity.

A photograph posted by the coast guard on its website showed scores of people, apparently mostly men, standing in groups on the deck of a small, battered-looking freighter with what appeared to be the name “Vatha” painted on her bows.

The coast guard statement said the ship had set off from Turkey. Its original destination was not clear, but it would likely have been heading for Italy where smuggling rings frequently send migrants by sea — particularly after Greece toughened border policing and maritime patrols over the past 18 months.

Usually they use yachts, and a large vessel capable of carrying several hundred people would mark a shift in tactics by smugglers.

The coast guard said that because of the number of people on the ship it was “one of the biggest search and rescue operations carried out in the eastern Mediterranean.

The last time a vessel carrying several hundred migrants was located in Greece was in late 2014, again off Crete. The 77-meter (250-foot) Baris cargo ship ran into trouble in international waters with nearly 600 people on board and was towed by a Greek naval frigate to the Cretan port of Ierapetra.

The passengers, mostly Syrians told officials they had paid smugglers $2,000 to $6,000 for a passage from Turkey to Italy on the ageing rust bucket.

A couple more cargo ships were also located around the same time heading for Italy. But the use of vessels that size eased soon afterwards, as by then smugglers were offering a cheaper and quicker — though by no means safer — way into the European Union.

Crammed into flimsy dinghies, almost a million people fleeing conflict and poverty in the Middle East, Asia and Africa crossed from the Turkish coast to the Greek islands, seeking to proceed through Greece to more prosperous EU countries.