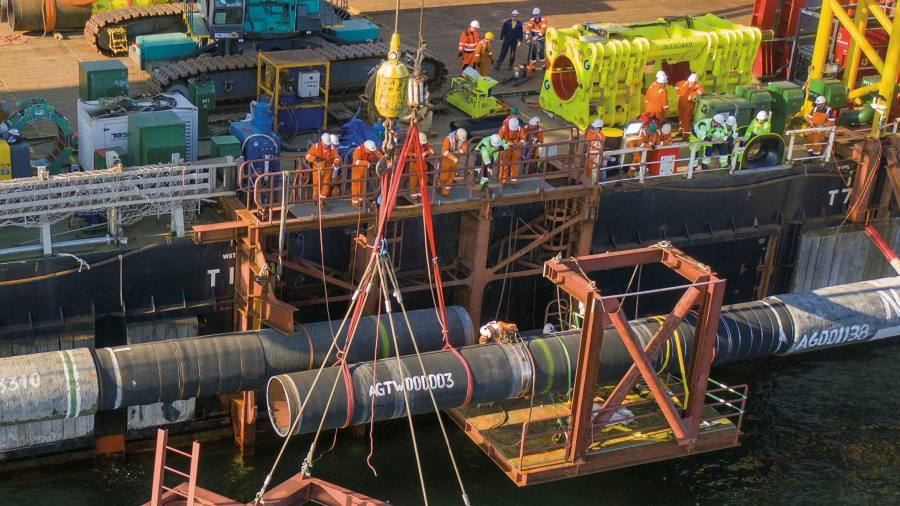 Germany’s energy regulator said it had “temporarily suspended” certification of the Nord Stream 2 pipeline, dealing a setback to the Kremlin-backed gas project and sparking a rise in UK and continental European gas prices.

The regulator said it could not yet approve the project, led by Russia’s Gazprom, because its owners had chosen to create a German subsidiary branch that was not yet properly set up according to German law.

The suspension comes at a critical time for European gas supply, with prices surging across the continent. Gazprom has been accused by some countries of restricting exports to western Europe to increase pressure on Germany and accelerate approval of the project.

UK gas contracts for delivery in December rose 17.2 per cent to £2.40 a therm on the news on Tuesday, while the European benchmark gained 15.2 per cent to €94 per megawatt hour, with both contracts trading near their highest level in a month. Having eased slightly in October on hopes of higher Russian supplies, gas prices have gained more than 40 per cent in the last week.

The Swiss-based Nord Stream 2 project is creating a German subsidiary to own and operate the German section of the pipeline in response to EU “unbundling” regulations, which require that companies producing, transporting and distributing gas within the bloc are separate entities. The project’s request to be exempted from the rules was rejected by German courts in August.

“Our company undertakes this step to ensure compliance with applicable rules and regulations,” Nord Stream 2 told the Financial Times.

German regulators said certification would be suspended until all relevant assets and employees were transferred to the subsidiary. It said Nord Stream 2 would then be able to continue the four-month certification process laid out by law.

Brussels officials said that once German authorities had finalised their draft certification process, it could be submitted to the European Commission. Brussels has two months to assess the certificate.

Alan Riley, a senior fellow at the Atlantic Council think-tank, argued that the attempt to create a territorial subsidiary for the 33km section of the pipeline in Germany was effectively an attempt to find a loophole in the rules.

Even if the commission accepted the plan, he said, a bloc member such as Poland — which opposes Nord Stream 2, arguing it is a threat to European energy security — would sue. He said Nord Stream 2 “will have to test if there is in fact a loophole at the European Court of Justice”.

Nord Stream 2 would send 55bn cubic metres of gas per year under the Baltic Sea, allowing Gazprom to reach customers in Germany and elsewhere in Europe without using pipelines running through Ukraine.

Officials in Kyiv have warned Russia is in effect blackmailing Europe by restricting gas supplies, and that reducing its reliance on Ukraine could make it easier for Moscow to launch an invasion.

Yuriy Vitrenko, chief executive of Ukraine’s state gas company Naftogaz, warned Gazprom was “resorting to legal tricks” with the subsidiary. “This is a mockery of European rules,” he said.

Pawel Majewski, chief executive of PGNiG, Poland’s state-controlled gas company, welcomed the German decision as a “good sign for Poland and for Europe”.

“It is not possible to certify a subsidiary of Nord Stream 2 AG as an independent operator of the gas pipeline. It is also not possible to establish an operator applying EU law only in the territorial waters of Germany,” he said. “We regard today’s decision as the first step towards ensuring the enforcement of the law.”

Gas traders have been looking for signs that Russia will increase exports to western Europe but have seen only piecemeal increases in recent weeks, with flows well below the level of a year ago.

Russia’s president Vladimir Putin has consistently linked higher exports to approval of Nord Stream 2. Any delay is likely to increase fears that Russian flows will remain relatively low this winter.

“Any remaining hopes that this pipeline would be available for the winter are completely dashed,” said James Waddell at Energy Aspects, a consultancy. “Increasingly it’s looking like it may not start up until the second half of next year.”

Waddell said Russia could boost supplies to western Europe through the Ukrainian pipeline system Russia has relied on since Soviet times, but he said this was unlikely given Moscow’s insistence that Nord Stream 2 was the key to boosting exports.

Additional reporting by Roman Olearchyk in Kyiv, James Shotter in Warsaw, Nastassia Astrasheuskaya in Moscow and Mehreen Khan in Brussels