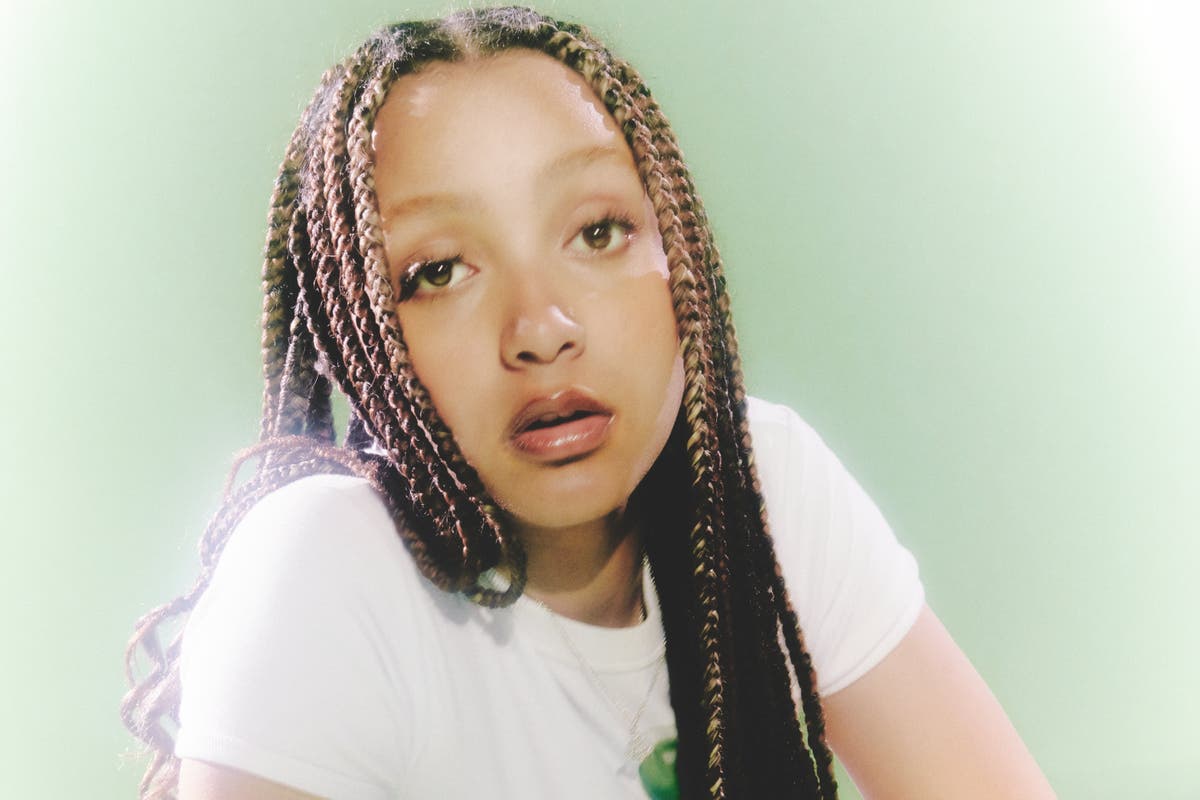 On Christmas Day last year, PinkPantheress uploaded her first TikTok video. This may seem relatively inconsequential. After all, with one billion users uploading bite-sized videos to the app each day, the 20-year-old’s 10-second snippet of ‘Just a Waste’, her song that samples Michael Jackson’s Off the Wall, was a minuscule drop in the addictive algorithm that has kept Gen Z glued to their phones throughout lockdowns. But that TikTok was the first step of a determined plan. Lacking patience by her own admission, PinkPantheress wanted to break into music fast and mediocre success wasn’t enough. Her music needed to blow up, like Lil Nas X’s TikTok-to-Grammy-wins ascension. Those awards are still pending, but with almost nine million monthly Spotify listeners, a Top 20 mixtape, To Hell With It, and sold-out shows across London now under her belt, PinkPantheress’ plan is, well, going to plan.

‘I don’t like the space between being an artist that isn’t known and being an [established] artist,’ PinkPantheress explains of her rush to get to the top, lounging on a sofa, head in hand, after her ES Magazine photo shoot. ‘There is a middle ground where it’s like, “Oh, I’ve heard of the song but I haven’t heard of the artist.” I just wanted it to be straight up, so people would know the song and know me by the song.’

Before that first TikTok video, she had been uploading music to Soundcloud with lacklustre results. TikTok’s algorithm, she realised, was more fertile for virality. ‘I was literally like, if Lil Nas X became successful in the space of one song that got big on TikTok then anyone can do this,’ she says, before quickly checking herself. ‘Respectfully.’

PinkPantheress is surprisingly open for someone whose real name is top secret and whose face was only revealed to fans in September, when the music video for her UKG-influenced hit ‘Just for Me’ dropped. With auburn box braids, bleached eyebrows and wide, doe eyes that have a glimmer of mischief behind them, she has the quiet confidence of someone who doesn’t need to be the loudest in the room because her success speaks for itself. Also, that would be uncool.

The artist’s relative anonymity is part of the allure that sold out her debut live shows, despite the fact she announced them with just a week’s notice before the first gig at the end of October. It’s mysterious, intriguing and practically unheard of for a generation who has grown up chasing likes. She doesn’t even check her official Instagram account, instead opting to post ‘on main’, by which she means a private handle reserved for friends and family.

But for PinkPantheress, this isn’t a strategic attempt to craft an enigmatic public persona. It’s an act of self-preservation. ‘To go from the jump of no one knowing you to then having a big footprint on the internet is going from zero to 100 real quick,’ she says, her eyes widening that bit further. That’s why the reveals, from her face to her gig dates, have been gradual, ‘so I can warm to it, as opposed to it all happening at once and having a surge of mental confusion’. Has the newly minted Top 20 artist acclimatised enough to fame for the big real-name reveal yet? She looks shocked that I’d even ask. ‘Absolutely not.’

Born in Bath and raised in Kent, PinkPantheress’ plan wasn’t always for music, but it has been a permanent fixture in her life. Her Kenyan mother and English father flooded the house with Queen, Michael Jackson and African music throughout her childhood, and when that wasn’t playing, she would listen to ‘whatever was on MTV’. Piano lessons from an early age gave her a technical foundation in music, while singing for fun felt like the only thing she was good at. Subjects such as maths and sport were a no-go, ‘even though my mum forced me to go to gymnastics’.

Aged 12, she entered a talent contest at school, singing Ben E King’s ‘Stand By Me’. She lost, but it didn’t dent her determination. The emo phase came next. ‘I was in a band and we sang covers of Paramore, My Chemical Romance and Green Day,’ she remembers, smiling. This was soon followed by the K-pop phase, a transition she asserts is typical of online emos and happened five years ago, before the genre exploded into the global mainstream. ‘The whole idea is that you’re going from one alternative genre to another,’ she says of the emo to K-pop ‘stan’ pipeline. ‘A part of liking those genres is the fact that barely anyone listens to it.’

The I-knew-them-before-they-popped-off effect is a fandom incentive that PinkPantheress believes is also part of her own success. ‘People like catching these things early,’ she says. ‘If people saw me promoting a song on TikTok and it happened to be good [when I was starting out], then they’re like, “I’ve found someone that no one knows about, so I’m going to follow them now so that I can say I’m one of the early ones.”’

Yet throughout the talent contests, band practices and K-pop frenzy, a career in music felt like an unachievable ambition for PinkPantheress. She had the savvy, the talent and the creativity, but she didn’t have access to traditional entry points, such as industry connections. Instead, she moved to London to study film, which she soon realised wasn’t her calling. Living in halls throughout the rule-of-six restrictions and lockdowns, fed up with her course and suppressing her passion for music, the push to pursue her dream seriously came from another artist whose career was propelled by TikTok: Doja Cat.

‘I watched an interview with her where she said that she wasn’t sure about making music, but thought she’d regret it if hadn’t at least tried,’ she says. ‘I thought, I might as well do what she said and… yeah.’ PinkPantheress shrugs and curls her upper lip inward for a toothy smile, a recurring gesture that bookmarks her answers like an awkward but nonchalant full stop.

In January, a month after embarking on her TikTok mission, PinkPantheress revealed her music persona to her closest friends, albeit not by choice. After setting herself the challenge of writing a song a day to gain traction on the app, her track ‘Pain’ had started to go viral and pop up on friends’ feeds. It’s not hard to see why the song caught people’s attention. Featuring a sample from iconic garage track ‘Flowers’ by Sweet Female Attitude and confessional lyrics that feel like drafts of unsent texts to unrequited lovers, it was the perfect combination of familiarity and fresh, relatable storytelling. ‘It’s eight o’clock in the morning, now I’m entering my bed, Had a few dreams about you, I can tell you what we did,’ she opens with her distinctive, high-pitched vocals. ‘This sounds like you,’ was the immediate response from friends. Her reply? An unceremonious ‘Yeah, it is.’ By August, the track had crept its way up to number 35 in the UK charts.

A large chunk of PinkPantheress’ music generally follows the same format as ‘Pain’. Her earliest tracks were made alone in her bedroom with a microphone her brother gave her for Christmas, so she leaned on samples because she ‘can’t produce from scratch’. On ‘I Must Apologise’, she switches up Crystal Waters’ staple Nineties house track ‘Gypsy Woman’ with a drum ’n’ bass beat, while ‘Break it Off’ borrows from Adam F’s classic ‘Circles’.

These tracks, alongside the Mura Masa-produced ‘Just For Me’, often trick new listeners into assuming PinkPantheress’ speciality is garage and drum ’n’ bass, but as she stresses, her influences reach far and wide. She has also sampled Linkin Park and even the Italian bossa nova artist, Toco. ‘I try not to go for super well-known ones,’ she says, while admitting the Sweet Female Attitude and Crystal Waters cuts aren’t exactly hidden gems. ‘I kind of failed at that.’

But whether PinkPantheress is referencing 1990s rave scenes or rock music, two things unify her songs: a Y2K nostalgia and track lengths that rarely clock more than two minutes. Yes, this is partly to cater to the TikTok attention span, but it’s also a personal choice — kind of. ‘I’m bad at writing more than a few minutes,’ she explains. ‘I get bored of melodies and don’t like repeating them.’

And the Y2K element that also seeps into her visuals? ‘It was just an era when no one really cared. As it got into the 2010s, people started to care so much more about posting and editing things. Everything just started to look way too refined, clean and polished,’ she says. ‘I’ve always been a fan of things that are a bit cursed or shit.’

Right now, PinkPantheress is enjoying the best of both worlds, living in a student house in London with those same best friends, but posing for Heaven by Marc Jacobs campaigns in lieu of attending lectures. ‘I think I’m enrolled [at university this year], but I don’t go,’ she confesses, although the student-turned-chart-topper doesn’t look too guilty about it.

Her current living situation is ‘the best thing [she’s] ever had in her life’, flat-sharing with friends who have been by her side since the beginning of secondary school. And this is not your average group of young women. ‘I’ve got a friend who’s a Louis Vuitton model and is constantly in different countries for shoots, I’ve got other friends who are artists,’ she says of her talented circle. ‘We’re all successful in our own right, basically.’

If the company she keeps is impressive, it’s nothing compared to the growing list of famous fans PinkPantheress has accumulated over the past year. Lizzo, Charli XCX and Grimes have all sung her praises, while US rapper GoldLink tapped her for a feature on his latest album Haram! and London-based Central Cee sampled ‘Just For Me’ for his single ‘Obsessed With You’. She shrinks into herself with a sheepish grin at the mention of these names. ‘It’s crazy. I didn’t expect it,’ she says. ‘I don’t think any musician really expects other musicians to pay heed, so when you find out that the musicians like it, it’s like, wow.’

But of all the artists she could collaborate with, one stands out among the rest. ‘Kaytranada, every time,’ she gasps, without hesitation. In fact, PinkPantheress is so inspired by the Canadian producer and DJ that one of the highlights of her rapid rise is when he followed her on Instagram — that, and hearing a crowd at Reading Festival sing along to ‘Just For Me’ when it was played before Central Cee’s set.

What’s next in PinkPantheress’ plan? If you thought the woman who won’t reveal her real name would be loose-lipped about that, you’re sorely mistaken. ‘A few features,’ she says coyly, ‘that’s it… so far.’ Festival dates and more travelling are also on the agenda, but for now, she’s luxuriating in celebrating the wins of her tight-knit friendship group.

‘They’ve seen me struggle and I’ve obviously seen them grow as artists themselves,’ says PinkPantheress, grinning over the achievements they have been cultivating since their teens. ‘Whether it’s me having a listening party for my first mixtape or my other friend having their first show, those are the moments when I’m celebrating my success.’

Sure beats your average graduation party. Those skipped lectures are paying dividends already.