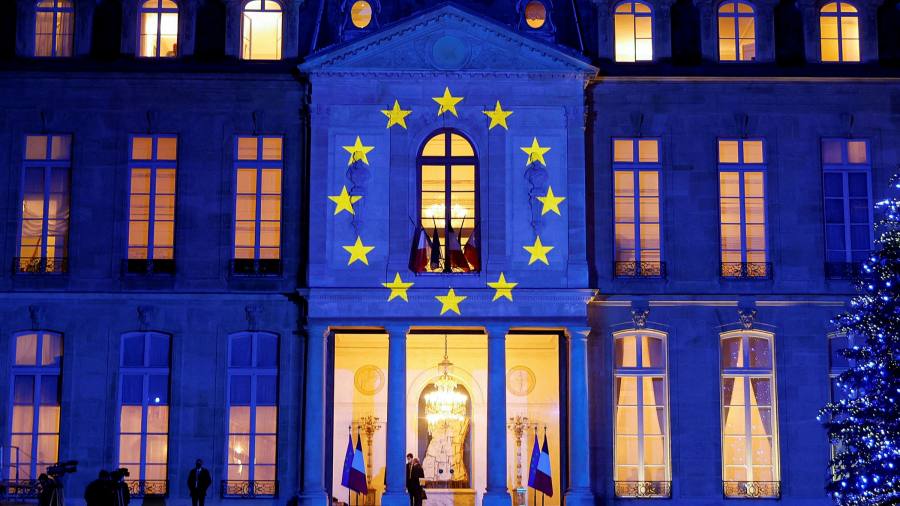 Bonjour and welcome to Europe Express.

Our main story comes from Paris, where Emmanuel Macron and Ursula von der Leyen are set to address the media this morning. With the EU presidency firmly in French hands, we will take a look at the Elysée’s ambitions for a more “sovereign” Europe and where reality is likely to bite.

On the Brexit front, we will explore why the rejection of a case by the European Court of Human Rights in Strasbourg could have a positive impact on EU-UK relations.

And with the Netherlands announcing the appointment of a dedicated minister for pensions, we will unpack the main elements of a pending reform of the country’s $1.7tn retirement system.

Emmanuel Macron has left no doubt that he wants to lead a Europe with more swagger in its step as he takes over the EU’s rotating presidency, writes Sam Fleming in Paris.

With commissioners visiting Paris for the opening of the six-month presidency, French officials have been setting out more detail on what exactly this reassertion of European “sovereignty” will mean. In the process, the discussions have exposed the many contradictions that flow from the French agenda.

The philosophy is fairly clear. Faced with a world driven by brutish great power conflicts, a more aggressive China and an unreliable US, Europe must reassert itself as a sovereign actor. The supply chain disruptions laid bare during the Covid-19 crisis only underscore the urgency of this cause.

Paris has set its sights on a March summit as the moment to push Macron’s more interventionist approach, with an industrial and economic relaunch permitting Europe to be a “master of its own destiny”.

In Brussels, this means pursuing EU initiatives to crack down on foreign subsidies that distort the single market; tougher tools to counter coercive trade practices; a carbon border adjustment mechanism to tackle polluting imports; an international deal requiring multinationals to pay more tax where they do business; and twin pieces of legislation aimed at Big Tech companies.

A central plank alongside all this is a bid for an industrial relaunch that will claim to boost European self-reliance in critical sectors including greener technologies such as batteries and hydrogen, as well as semiconductors, the data cloud and pharmaceuticals.

This will be allied with a pitch for strategic public investments in those areas to get favourable treatment under a reformed Stability and Growth Pact — as indicated by Macron and Italy’s prime minister Mario Draghi in an FT column late last year.

France reckons the winds in Europe are blowing in favour of this more interventionist vision. But it will still bump up against uncomfortable political and economic realities.

A revised SGP might do more to propel public investment, for example, but as the commission has repeatedly pointed out, the lion’s share of spending in the digital and green transition will have to come from the private sector.

The two projects aimed at unleashing bigger flows of finance — the Banking Union and the Capital Markets Union — remain badly stalled, and officials are not talking up the prospects of progress during the French presidency.

The risk with state-driven initiatives aimed at reshoring industry is that they end up splashing public money on ill-considered projects — one of the worries surrounding the EU’s semiconductor ambitions. And for all the talk of furthering pan-European interests, it tends to be the big member states that clinch the most enticing projects.

Politically, the idea of carving out large chunks of public investment is still seen in the most frugal states as the thin end of a wedge that could denude the budget rules of credibility. Officials also suspect any deal on the SGP is unlikely to land until after the French presidency — potentially late this year or in 2023.

Meanwhile, talk of the EU becoming a more credible sovereign actor on the global stage will continue to clash with realpolitik. Nowhere is this more obviously apparent than in the Russia-Ukraine crisis, where the EU is still confined to playing a peripheral role.

In another sign that Ireland’s economy is booming despite the Covid-19 pandemic, tax revenues hit a record of €68.4bn, an increase of €11.2bn, or about 20 per cent, from 2020. Corporation tax receipts — which under an OECD deal are set to rise to 15 per cent from Ireland’s long-cherished 12.5 per cent rate — rose almost 30 per cent to €15.3bn. (Full report here)

No case for cake

Late last year, as tough talks on ironing out post-Brexit trade rules for Northern Ireland hit the rocks, the UK climbed down on its refusal to accept oversight from the EU’s top court. So a ruling this week by another European court might bring Brexiters some cheer, writes Jude Webber in Dublin.

The European Court of Human Rights (which is a pan-European, not an EU, body), has thrown out the so-called gay cake case, brought by activist Gareth Lee against an evangelical bakery in Belfast that refused to ice a cake for him with the words “Support Gay Marriage”. The Strasbourg-based court found that the plaintiff had asked it to “usurp the role of the domestic courts”.

“Victory for UK government at ECHR,” Joshua Rozenberg, a prominent legal commentator wrote on Twitter. “The decision is final and will be welcomed by the UK government.”

According to the court, Lee had “failed to exhaust domestic remedies” in the case. The ECHR ruled that Lee, who had won his case in the lower courts before losing at the Supreme Court, had not raised the issue of human rights during the seven-year saga.

In 2018, the Supreme Court found Ashers Bakery did not break discrimination laws by refusing to decorate the cake as Lee requested because of their opposition to same-sex marriage, which was illegal at the time in Northern Ireland. Lee said he was frustrated that the core issues of the case at the ECHR did not get “fairly analysed because of a technicality”.

As for the UK’s objections to the European Court of Justice being the ultimate arbiter of trade rules in Northern Ireland, which remains in the EU’s single market after Brexit, that issue appears parked for now while the sides thrash out practical ways to improve the flow of goods. Talks resume next week between the UK’s new Brexit honcho, foreign minister Liz Truss, and the EU’s Maros Sefcovic.

Carola Schouten is expected to take up the role as minister for poverty policy, participation and pensions when the fourth Mark Rutte government is inaugurated next week. Previously, oversight of the retirement system, regarded as one of the world’s best, had fallen under the purview of the ministry of social affairs and employment.

The appointment of Schouten, who has served as deputy prime minister and agriculture minister since 2017, comes as the Dutch retirement income system undergoes a sweeping overhaul aimed at improving sustainability.

Most pensions in the Netherlands are “defined benefit”, promising guaranteed retirement benefits for life. However, this system came under pressure after the 2008 financial crisis, which strained scheme funding ratios and led to benefit cuts for many pensioners.

Rules coming into force no later than January 2023 will see this system swept away in favour of a “defined-contribution” model, in which pension funds will no longer make promises about the amount in benefits they intend to pay out to members.