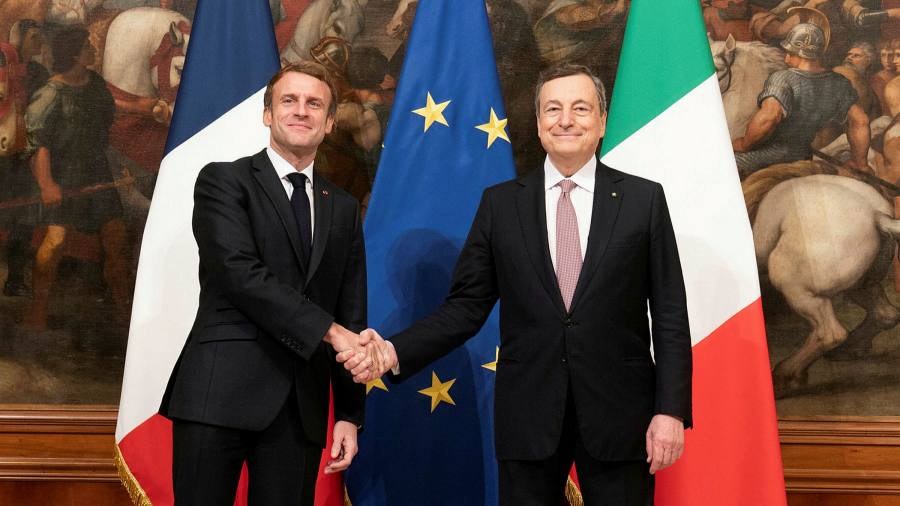 A pitch from France and Italy to revamp the EU’s budget rules so that they spur investments and drive long-term growth is likely to face a frosty reception among more fiscally conservative member states as the debate over the bloc’s fiscal outlook intensifies.

Mario Draghi, Italy’s prime minister, and Emmanuel Macron, president of France, wrote in the Financial Times that debt raised to fund investments in priorities should be “favoured by the fiscal rules”.

While EU member states needed to bring down their levels of indebtedness, public spending on future priorities “actually contributes to debt sustainability over the long run”, they argued in an article in the FT.

“Our strategy is to curb recurrent public spending through sensible structural reforms,” they wrote. “And, just as the rules could not be allowed to stand in the way of our response to the pandemic, so they should not prevent us from making all necessary investments.”

The Franco-Italian intervention comes as the European Commission engages in a public consultation over how the Stability and Growth Pact (SGP) could be reformed when the rules are reimposed following a temporary suspension forced by the pandemic.

Economists and some policymakers argue the existing framework is ill-suited to the heavy debt burdens and huge public spending requirements that Europe faces in the coming years and decades.

France and Italy did not give details of what the new SGP should look like, but some economists have been arguing for a “golden rule” to be introduced permitting certain investments — for example in green projects — to be stripped out of deficit or debt calculations. One EU diplomat warned, however, that northern capitals would “dig in” and oppose any such carve-outs from public spending rules, favouring more incremental changes to the SGP.

Rome and Paris also suggested the €800bn NextGenerationEU recovery fund — backed by an unprecedented collective borrowing effort by EU member states — could serve as a “blueprint” for future joint projects along similar lines.

The discussion over specific reforms to the SGP will gather momentum early next year, and officials want it concluded in the first half of 2022 while France holds the EU’s rotating presidency.

In a letter to the Dutch parliament earlier this month, caretaker finance minister Wopke Hoekstra pointed to European Commission staff working papers that have found that golden rules do not necessarily do an effective job at incentivising public investment, and that they are too complex.

The incoming Dutch coalition has said it remains “committed to a sound and prudent macroeconomic policy and necessary reforms by member states, aimed at sustainable debt, higher economic growth and upward convergence”.

The position of the new German coalition government will be critical — and officials are awaiting clearer signals. Politicians in Berlin have been discussing ways of raising funds without violating the country’s constitutional debt brake, including via off-balance sheet mechanisms — a debate that is being closely watched in other capitals.

Frugal member states also made their support for NextGenerationEU conditional on it being a one-off, and they have displayed no immediate appetite for opening up a debate over the idea of creating similar schemes.

A eurozone diplomat said any weakening of the SGP would undermine the case for continuing common debt issuance beyond the recovery fund by eroding trust between so-called creditor and debtor economies. “More fiscal imprudence should result in less common responsibility,” said the diplomat.

Valdis Dombrovskis, executive vice-president of the European Commission, told the FT this week that he was willing to examine the idea of a “green golden rule” skewing the fiscal rules in favour of certain classes of green assets.

But he also stressed that the EU’s top priority had to remain reducing overall public debt burdens. “It’s clear when we look at debt-reduction trajectories, it concerns all the public debt — not bits and pieces of public debt.”