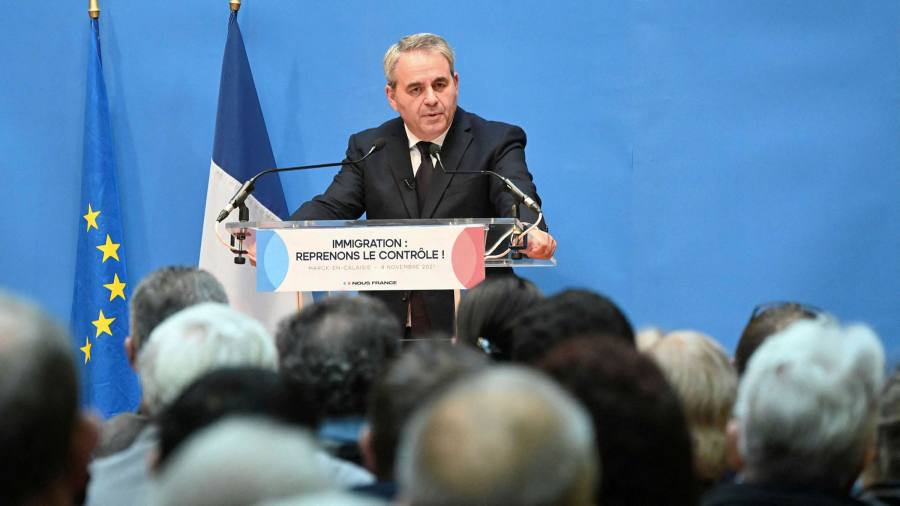 Take back control. Xavier Bertrand, a contender for the centre-right nomination for France’s presidential election, may not be explicitly copying the winning formula of the Brexit campaign across the Channel. But he is hoping the policy he announced for clamping down on immigration at a rally near Calais last week will resonate with conservative voters ahead of the primary election on December 4.

Bertrand is the latest presidential hopeful to set out his stall in a pre-campaign phase that is increasingly dominated by the immigration issue following a surge in support for Éric Zemmour, the hard-right polemicist who contends that France is under threat from Muslim immigration.

An opinion poll published on Sunday put support for Zemmour in the first round of the presidential election at 17 per cent, enough to edge out Marine Le Pen, the established far-right leader, and to earn a run-off place against President Emmanuel Macron in the second round on April 24.

Opinion surveys suggest Bertrand, president of the Hauts-de-France region, is the frontrunner of the five people vying for the nomination of Les Républicains, a party he previously abandoned to build his own brand. But even he only musters 13 per cent in national polls. It is a measure of the uphill battle the centre-right faces in this election even though, paradoxically, the political centre of gravity of French voters has shifted decisively to the right in recent years as terrorism, crime and the threat of Islamism to secular traditions became the most pressing concerns. With Zemmour now eclipsing the more moderate Le Pen, immigration has become the defining issue.

Even the left is not immune: Arnaud Montebourg, a former socialist industry minister who is running as an independent, said he favoured a ban on remittance transfers from France to countries that refused to readmit their nationals.

Like his mainstream rivals — former chief Brexit negotiator Michel Barnier and Valérie Pécresse, president of the Ile-de-France region — Bertrand wants a quota system for legal migration, an end to regularisation of illegal entrants and reduced access to welfare benefits for irregular migrants. Unlike Barnier and Pécresse he did not explicitly call for France to challenge the jurisdiction of European courts over French immigration policy — although it is hard to see how he would achieve a target of cutting immigration for reasons of family reunion by two-thirds without a clash over the right to family life.

Barnier and Pécresse have both called for changes to the constitution to reassert French legal sovereignty over European courts. The moves echo Poland’s tussle with the EU over its judicial reforms although Patrick Stefanini, a veteran strategist who is Pécresse’s campaign manager, argues that France would not be breaching fundamental treaty principles.

Rather than take aim at the EU, Bertrand has trained his sights on Britain. He accused London of failing to police its maritime border while making it too easy for illegal immigrants to work for low pay and vowed to rip up the so-called Le Touquet accord under which Britain and France in effect share responsibility for migrant flows towards English shores.

The problem for the centre-right candidates is how to compete with Zemmour’s much harder line which seems to seduce a slice of their voters. He subscribes to the far-right theory of the “great replacement” under which France will be majority Muslim by 2050 and on the verge of a civil war — a stance too extreme even for Le Pen. Zemmour wants to end all immigration for 10 years by scrapping the right to asylum and changing the constitution so that it offers no legal protection to would-be migrants.

On the BFMTV news channel on Sunday, Zemmour scoffed at his mainstream rivals as “centrist pro-European grandees who have never seriously tackled immigration, never. And they are waking up now they see that their electorate is in uproar up about the subject.”

A strong showing in regional elections in June appeared to give the centre-right a launchpad for the presidential campaign. But they have spent the time since arguing among themselves over selection procedures.

“They made a huge mistake, focusing on internal process and not on the agenda,” said Laurent Bigorgne, director of the Institut Montaigne think-tank. “They have left Zemmour to define the battlefield. They can say whatever they want but it is too late.”