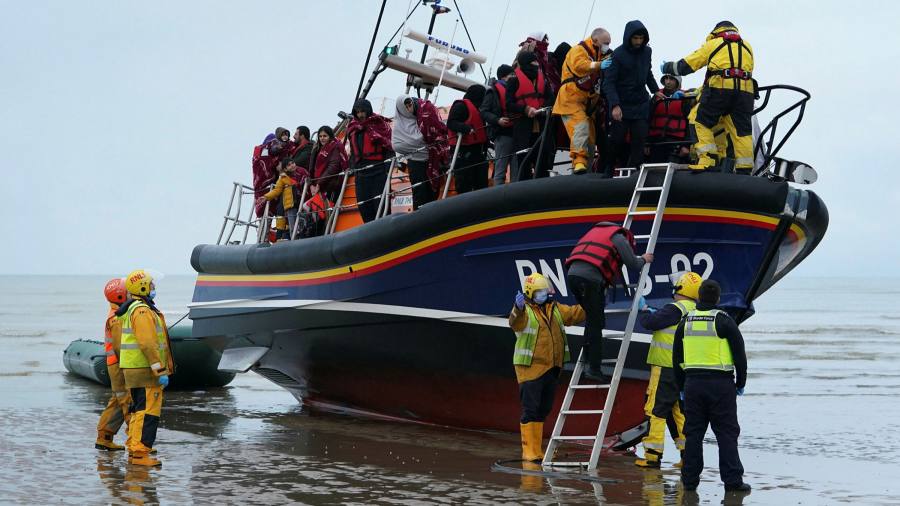 France has told the UK that it needs to take responsibility for solving the crisis of thousands of migrants seeking to reach England from France in small boats by making it harder for people to find illegal work and by providing a “pathway for legal migration”.

The proposals, made a week after 27 migrants died when their small boat collapsed in the Channel, were contained in a letter sent to UK Prime Minister Boris Johnson from French PM Jean Castex on Wednesday night.

“A large part of the solution lies not in France but the UK,” Castex wrote. “Indeed only you can dissuade the migrants who shouldn’t be settling in the UK from going there by running a more effective policy of returning them home.

“Only you can weaken criminal people-smuggling networks by opening paths to legal immigration to those who have legitimate reasons for going to your country. Only you can ensure that your labour market is sufficiently regulated to discourage those who try to work illegally.”

However, Castex’s letter also struck a constructive note after weeks of cross-Channel tensions over the migration issue and spoke of “the basis for a possible new framework for co-operation between the EU and UK”.

He said both sides should look at “strengthening migration co-operation between the EU and UK” and that “could include a mechanism of virtuous transfers between the United Kingdom and the European Union”.

France and the UK, their relations already soured in the aftermath of Brexit by disputes over trade, fishing and the status of Northern Ireland, have been arguing about where to lay the blame for the accident and for the rising numbers of people, many from the Middle East and Afghanistan, taking to small boats in an attempt to reach England.

At least 26,611 people have completed clandestine crossings in small boats to the UK this year up to November 25, more than three times the total for the whole of 2020. The method has become the main means of clandestine migration to the UK after stepped-up security and reduced traffic flows made it far harder for would-be migrants to hide in trucks or under trains.

Emmanuel Macron, president of France, was particularly angry about the way Johnson sent him a letter last week about proposed solutions and then publicised its contents before he had time to read it. Asking a subordinate of Macron’s, in the form of the French prime minister, to send his reply will be seen as a calculated snub.

Johnson laid the responsibility for the dangerous Channel crossings at the door of the French, calling for French and British maritime patrols to be stationed in each other’s territorial waters. He also asked that migrants who reach the English coast to be returned to France.

French ministers have rejected those ideas and suggested instead that the UK send protection officers to France who could examine the asylum demands of those seeking to reach Britain and so deter them from taking to small boats.

The UK has opposed the idea of examining asylum claims on French territory, arguing that such a centre would serve only to encourage would-be refugees to travel to France, possibly via routes such as Mediterranean crossings that are almost as dangerous as Channel crossings.

A senior French official on Thursday said: “The very great majority of these migrants want to go to the UK, and without a part of the solution dealing with legal migration, asylum and family reunion, we won’t solve the problem.”