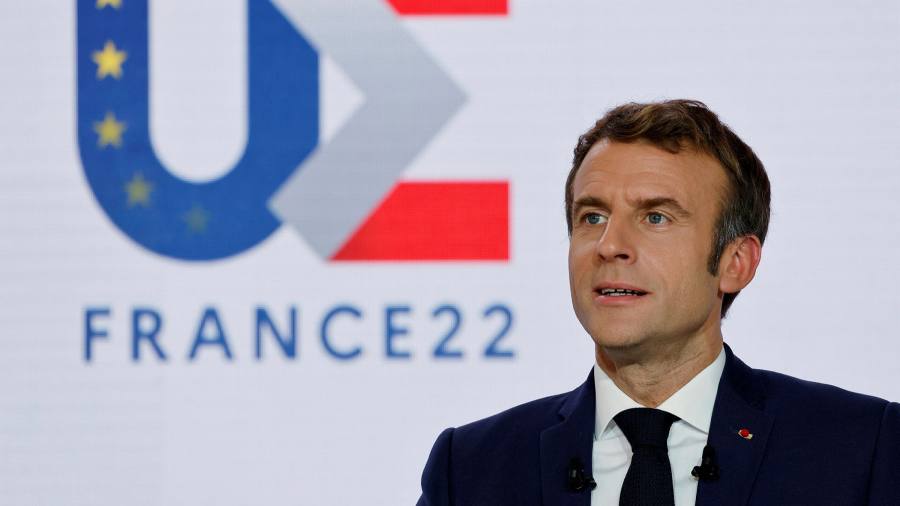 This article is an on-site version of our FintechFT newsletter. Sign up here to get the newsletter sent straight to your inbox every Monday

Hello from a train in the Lake District, avid readers. I’m on my way to Scotland to talk about schemes ensuring communities have access to cash, even as bank branches and ATM numbers dwindle (more on this in a later newsletter).

As the days grow shorter and Christmas is less than a fortnight away, talk of Omicron continues to fill the air. Though we’re yet to see how heavily lockdown measures will re-emerge, I for one will be watching the fintech space to see whether we’ll have the same winners from previous rounds.

In this week’s edition, asset management reporter Akila Quinio talks to the chief executive of French banking app Lydia, which reached a unicorn valuation after it closed a funding round last week.

Meanwhile, I spoke to Pleo, which provides smart company cards and has secured a $4.7bn valuation after a $200m extension to their series C round.

As always you can reach me at sid.v@ft.com. Thanks for reading.

When French president Emmanuel Macron said his country should have 25 unicorns by 2025, the nation counted nine and wasn’t exactly known as a tech hub. Two years later, nine of France’s 22 private companies valued over $1bn are fintechs. Banking app Lydia joined the ranks last week after closing a $100m round.

“France is a great place to build European start-ups,” said David Sainteff, partner at Global Founders Capital. Because of its “challenging” regulatory environment and competitive scene, start-ups that “reach a market-product fit despite those constraints” are often mature enough to compete on a European scale, added the backer of French digital accountancy firm Penny Lane.

Ten years ago, France suffered from chronic bureaucratic syndrome. Administrative hurdles stifled innovation and entrepreneurship. Homegrown talents, despite strong maths and finance credentials, would start companies elsewhere. Eventbrite and Datadog are among the billion-dollar companies that French entrepreneurs founded in the US.

The sheer perspective of “building champions” able to scale up beyond national borders “didn’t use to exist in France” said Lydia’s chief executive officer Cyril Chiche. “In fact, it existed very little in Europe outside of the UK,” he added. Chiche saw a shift take place in the last three years, as France started to attract foreign capital “in very large proportion”. China’s Tencent and US-based venture capital firm Accel are among Lydia’s investors.

Capital concentration in the UK’s fintech scene meant European start-ups were slightly undervalued in comparison, making them attractive to investors. “Once they realise there are companies of this calibre, which already have users, revenues streams, and a maturity they hadn’t imagined . . . they realise valuations are attractive and it’s a good place to invest,” said Chiche.

This year, France raised $2.8bn in fintech fundraising rounds, overtaking Sweden as the third-hottest European destination for venture capital in the sector, after UK and the Germany.

Lydia plans to add an investing arm to its banking and payments app, in a bid to become a European “super-app”. If scaling beyond borders is the next frontier for most French fintechs, the UK is not on their horizon, said Sainteff. As a “very competitive” environment, it has “well-established local players” and is seen by American companies as the “easiest gateway to Europe”. Like N26, Lydia closed its UK operation citing “local constraints”, and has instead focused on expanding in Portugal and Spain.

Though Emmanuel Macron has tried to nurture the French tech spirit — his government unveiled a pandemic stimulus plan for the digital sector worth €7bn — most fintech players say the trend predates him and expect it to transcend his presidency. “You’d have to be crazy to hit the brakes now,” said Chiche. According to BPI France, French fintechs have created over 25,000 jobs and most are actively hiring.

Chiche says the “tens and tens of concrete measures” implemented in the last decade helped the ecosystem flourish. He cites fiscal reforms, the creation of a public investment bank and the “bettering of relations between the tech scene and national administrations”.

“Crazy puzzles” used to penalise start-ups, says Chiche, such as the now-reformed Banque de France’s solvency scoring system. Previously, it was based on profitability and size, meaning lossmaking start-ups struggled to borrow cash.

“We believe that by 2025, two or three scale-ups will be on the CAC40, with probably one fintech among them,” said Paul-François Fournier, Innovation director at BPI France.

But challenges remain, such as fierce global competition for talents, said Sainteff.

When asked about the challenges of competing in a crowded pan-European market, Chiche said: “If we look at potential future big actors in digital banking . . . there are maybe 10 at most . . . Do you know how many banks there are in Europe? 5,073. So actually, well there is room, you know.” (Akila Quinio)

Every week we ask the founders of fast-growing fintechs to introduce themselves and explain what makes them stand out in a crowded industry. Our conversation, lightly edited, appears below.

I chatted with Jeppe Rindom, co-founder and chief executive of Pleo, which recently announced it had almost tripled its valuation to $4.7bn thanks to a $200m Series C extension. The Danish B2B fintech, founded in 2015, provides smart company cards and expense management, and operates across six markets including Denmark, Sweden and the UK. The latest round, led by Coatue Management with Alkeon Capital, brings the total Pleo has raised to $350m, with existing investors including Bain Capital Ventures and Thrive Capital.

What does the fundraising and valuation reflect about the current state of the market, and what are your expansion plans? I think it starts with a very consistent recognition that we are tapping into a massive market and we have a solution which is the easiest to use, with very high satisfaction and a strong business model. We now have 20,000 customers, which is a good proof point but also a recognition that the market is extremely immature, there’s so more to do. In terms of expansion plans, we’re very ambitious about Europe and will be more or less present in all European countries by the end of the year, and [we are] planning a launch in a new continent.

Who are your main competitors? You could say the real competition out there is Excel, emails, Google Docs, stuff like that. And then you have some more legacy payment cards and software, such as a card issued by Deutsche Bank or Barclays. In terms of Europe we see Spendesk, which has maybe 3,000 or 5,000 customers [Spendesk lists more than 3,500 users], so it’s a fraction of the market, but obviously we respect and follow them.

What trends have you noticed during the pandemic? We’ve been bouncing back really solidly during the pandemic because customers and organisations are just getting used to working in a more distributed fashion, of course, and increasingly investing in tools that can set up workflows for success. This is very relevant because before you relied on going to a manager and borrowing or a card, or your relied on going to an IT department, and you can’t really do that any more.

I think the second major trend is just about respecting your employees a bit more and caring a lot about their employee experience. It’s very competitive in talent management these days. Having a good experience for your employees is important, and you need to respect their time so you have to give them tools which are intuitive.

Is the shift to decentralised working a permanent change? I think that way of working is going to be sustained, but no doubt it is not the only use case for our technology. It’s also for travelling or those who need to manage a budget from the office, looking after subscriptions and different software tools. The working from home use case is trending right now, but before the pandemic, the traveller being out and about was the biggest use case.

Nubank shares leap in New York debut Brazilian fintech Nubank became the most valuable financial group in Latin America when it started trading last Thursday, with an eye-watering valuation of close to $50bn, write Michael Pooler and Nicholas Megaw. Investors in the company, which offers a range of services including savings accounts and business loans, include Warren Buffett, Tencent and SoftBank.

Monzo triples its valuation Stephen Morris and I got the exclusive on the coral-pink neobank’s $500m-plus fundraise, pushing its valuation to $4.5bn despite a bruising start to the pandemic. Monzo is continuing to look at new avenues, with its buy now, pay later product in beta and with the idea of cryptocurrency trading potentially being considered.

#techAsia — Your guide to the billions being made and lost in the world of Asia Tech. Sign up here

#techFT — The latest on the most pressing issues in the tech sector. Sign up here