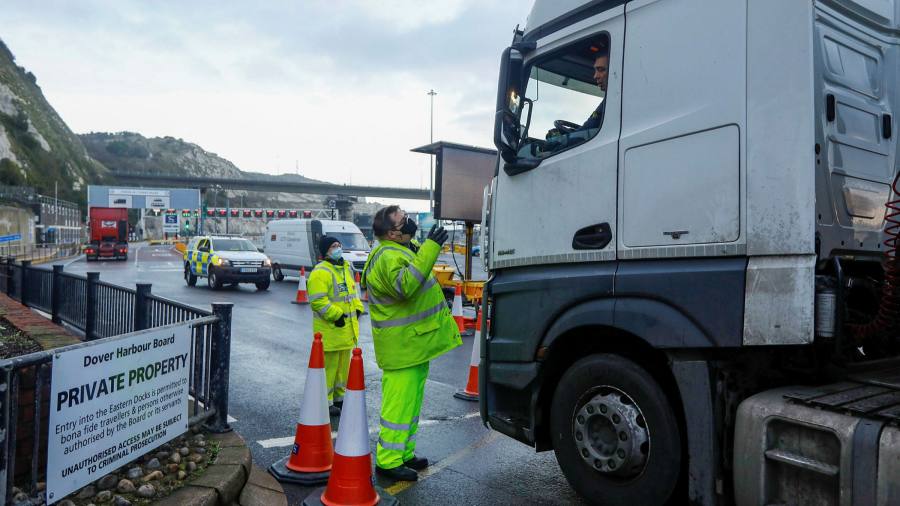 When it comes to business disruption, Brexit is largely out of the headlines now for the simple reason that it has become low-level and endemic.

Away from the front pages the problems caused by leaving the EU single market continue to manifest themselves to businesses, helping to drive inflation, by tightening the UK labour market and raising the cost of imports.

As the political saliency of the Brexit issue continues to fade, business will find it increasingly hard to generate the public pressure needed to lobby for upgrades to what was a low-ambition EU-UK Trade and Cooperation Agreement.

Still, not everyone is giving up. This week the British Chambers of Commerce, which represents tens of thousands of businesses, launched a trade manifesto and used the moment to urge the government to think about making “fixes” to the TCA to reduce the drag caused by the existing deal.

As Shevaun Haviland, the BCC director-general, who joined from the Cabinet Office last year, told my colleague Dan Thomas, previous promises to resolve some of the limitations of the deal have never materialised. “At the time of the deal, it was like, ‘we’ve got some things to fix underneath it but we’ll get to that quite quickly afterwards’. But we haven’t really been quick enough,” she said.

So what might those fixes be? William Bain, the Brexit lead at the BCC, has a wishlist of five top items that he believes could make a big difference to business.

Top of his list is a veterinary deal that cuts the requirements of the export health certificates and other “SPS” requirements that contribute hugely to border issues for anyone involved in food or plant products.

Second is VAT, which as any small business will tell you, is a nightmare because they have to grapple with 27 different regimes, hitting online sales for SMEs. A Norway-style deal could exempt the smallest businesses and remove the need for a local fiscal representative to clear VAT.

Third, the government should reconsider its position on creating its own version of the EU’s “CE” mark on industrial and electrical goods — the UKCA mark. Business remains deeply unconvinced by the idea.

Fourth, the government needs to work rapidly to expand the mobility provisions in the TCA to reduce limitations on business travel and work activities in the EU. Bain says cutting side-deals with EU member states should be a priority in 2022.

Fifth and last, the government needs to be light-touch in pursuing companies over customs declarations while seeking to improve the “rules of origin” chapters of the TCA to enable wider “cumulation” of inputs when calculating whether a good qualifies for zero-tariff access.

It’s not a bad list. And given political events in Westminster and the resignation of Lord David Frost before Christmas, it is not impossible to imagine a future — say under Rishi Sunak — that is more pragmatic than at present.

To be clear, this is not about unravelling Brexit or joining the EEA — leaving the EU single and customs union market comes with intrinsic costs — but equally that’s not to say it’s impossible to reduce frictions, despite these limitations.

A veterinary deal is controversial because it theoretically limits a trade deal with the US, but as we know, that deal remains a very long way off.

Even if a Swiss-style deal is too close for political comfort, groups such as the Food and Drink Federation still argue that it would be possible to build a bespoke arrangement that takes into account the scale and intensity of EU-UK trade in food products.

Of course, any such deal is going to have to be predicated on a permanent resolution to the Northern Ireland situation, which will require the UK to crystallise the Irish Sea border, with easements, and show good faith in operating it, including providing reliable data.

There are lots of “ifs” here, but the fundamental one is stabilising EU-UK relations in order to begin a discussion on where there are areas of mutual interest in building out the deal.

But that raises a second obstacle to these ambitions: given the asymmetry of the EU and UK economies, the EU has less interest in fixing problems given the relatively small exposure of its respective economies to the effects of Brexit.

Take conformity assessment — the ability of either side to recognise and certify compliance with each other’s regulatory regimes. During the trade negotiations Michel Barnier was explicit that the EU had no interest in allowing the UK to preserve its position as “a regulatory and certification hub” for the EU’s single market.

It seems unlikely that the EU would want to take steps to make it more attractive for investors to invest in the UK over the EU single market.

As a result, some “fixes” by future governments are likely to need to be unilateral on the UK side, for example simply recognising CE marks as valid in the UK in order to make it easier for UK business to integrate in EU supply chains.

The same goes for light-touch customs controls by HMRC that prioritise trade flows. That may not feel like taking back control of borders, but may yet be the most pragmatic course.

The asymmetries are also relevant when it comes to improving the rules of origin chapters of the deal. Bain would like to see an expansion of the ways in which EU and UK businesses can qualify for zero-tariff access to each other’s markets by including a broader range of inputs when calculating what is “local” content.

But as Sam Lowe, the trade director at Flint Global observes, there is “little incentive” for the EU to agree to this, since EU exporters have less of a problem meeting the existing requirements than UK exporters.

One suggestion, which was rejected by the UK in 2020, is for the UK to reconsider joining the “PEM” group of countries, which would allow for “cumulation” with a number of other countries in the region such as Switzerland and Turkey.

But Lowe warned that, while that would help in one regard, it would also create problems in areas such as electric vehicles where the rules of origin were tailored to the specifics of the EU-UK relationship — to be modified to fit the PEM model. In short, it’s complicated.

As for better “mobility” provisions to reduce limitations on business travel and work activities in the EU, this will also require overall relations to improve.

Talk of side-deals with EU member states is also probably quite optimistic given pressure from the European Commission on member states to do nothing that undermines the EU-wide positions taken in the TCA.

The impacts of such a meagre deal are real, and the travel and education industries do have mutual incentives to push politicians on both sides to be creative.

A survey by Seasonal Businesses in Travel (SBIT) estimates that the number of UK staff working in French ski resorts has dropped from 8,000 to 2,000 this year. Covid-19 has masked many of these effects, but they will start to be felt as we emerge from the pandemic, which has the potential to move the conversation.

Charles Owen, the managing director of SBIT who has called for action to reduce impacts on seasonal travel workers, said the TCA would be improved by a UK-EU-wide Youth Mobility Scheme of the kind the UK has with other countries, such as Australia and Japan.

He warns that without it, as holiday trade opens up again, there is a risk that UK operators just cannot meet demand because of the barriers on mainly young UK staff working in Europe.

This is contributing to rising prices, shrinking the offer to customers and reducing the ability of the industry to help lead the post-pandemic recovery. Both sides would benefit from such a deal, but the politics of increased immigration are not easy in the current environment.

“The officials and politicians we speak to are sympathetic to the request,” says Owen, “but we need a more proactive approach from the UK government to push this forward and reach an agreement with the EU”.

In summary, across all these five areas, it won’t be easy to engineer sweeping fixes to the TCA, but equally for those hoping to improve the deal, it is not a counsel of complete despair: there are things that, in a better political environment enabled by a deal on Northern Ireland and perhaps a more pragmatic prime minister, that could be done.

Do you work in an industry that has been affected by the UK’s departure from the EU single market and customs union? If so, how is the change hurting — or even benefiting — you and your business? Please keep your feedback coming to brexitbrief@ft.com.

Brexit is not in the headlines, but inflation definitely is, hitting a 30-year high this week, with pressure growing on the Bank of England to raise interest rates.

Andrew Bailey, the BoE’s governor, warned that a “very tight labour market” would put upward pressure on wages, while rising food prices in particular led analysts such as Kitty Ussher, the chief economist at the Institute of Directors, to warn that inflation was becoming “endemic rather than transitory”.

There are many factors driving inflation, but Brexit’s hidden hand — helping to tighten the labour market and raise import costs — makes the BoE’s decision-making harder, because the supply capacity of the economy will be smaller and less flexible, says John Springford, deputy director of the Centre for European Reform.

Data from the IMF show that the UK has suffered more inflation than many advanced economies since the pandemic began — a period that, of course, also coincides with Brexit, which is a factor unique to the UK economy.

While not a “slam dunk”, adds Springford, it is logical that supply-side issues, exacerbated by Brexit, will play into the UK’s ability to ease pressure on the labour market and the costs of food imports, which the Food and Drink Federation warned this week are rising fast.

“Britain lost many EU citizens in the pandemic, and many will not return because of Brexit. Importing goods has become more costly,” says Springford, noting that the BoE is assuming a loss of supply capacity of 3 per cent or so from Brexit.

“That means that, as demand recovers from the pandemic, the UK will hit supply constraints more quickly than other countries — indeed it has already, as shown by shortages of food and lorry drivers.”

Talk of a City Brexodus ahead of the 2016 referendum have proved overblown. This week Lex crunched the numbers on job losses in the Square Mile and found they were a fraction of the worst-case scenarios. But, the column says, in the coming years a lot depends on how financial services firms respond to being forced to split their operations between the EU and London.

Next week Italy chooses a new president to replace Sergio Mattarella. The election threatens the future of Mario Draghi’s national unity government. It also raises the prospect of former premier Silvio Berlusconi being installed as head of state. Here is all you need to know about the upcoming poll.

Liz Rowlinson from our House & Home team reports on the hurdles expats have faced since the end of the Brexit transition period a year ago. More stringent visa requirements and new lending rules are just two areas Liz looks at in this practical guide to the new bureaucracy.