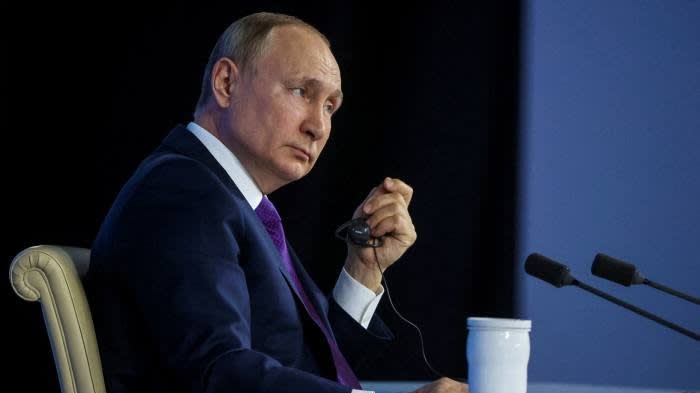 How well did you keep up with the news this week? Take our quiz.

Vladimir Putin said the US and Russia would meet in January in Geneva for talks over Ukraine, which he said were essential to protect Moscow from what he claimed were existential threats from Nato.

Speaking at his annual press conference in Moscow on Thursday, Russia’s president welcomed a “positive reaction” from the US to two sets of draft proposals on European security that the Kremlin published last week, which he said the sides would discuss at bilateral talks early next year.

“Our American partners are telling us they’re ready to start this discussion, these negotiations,” Putin said. “Representatives from both sides have been appointed. I hope that this is the way the situation will play out.”

He added: “The ball’s in their court. They need to tell us something in response.”

Thanks for reading FirstFT Asia. We’re taking a short holiday break and will be back in your inboxes on Tuesday, December 28. Here’s the rest of today’s news — Emily

1. US stocks close at a record high as Omicron fears abate US stocks rose to a record-high close yesterday, marking the third consecutive advance for the $52tn market as promising economic data helped offset fears surrounding the spread of the Omicron coronavirus variant.

2. Intel apologises for banning use of components from Xinjiang The apology was in response to attacks from Chinese nationalist media over the policy. The controversy erupted after the US chipmaker sent a year-end letter to suppliers noting that components made in the north-western Chinese region of Xinjiang should not be used in its semiconductors.

4. Third Point fund chair quits after ‘personal threats’ Steve Bates, a former US equity analyst and JPMorgan executive who had been Third Point’s chair since 2019, has stepped down after he received “personal threats” amid an escalating fight with rebel investors. “Circumstances have rendered his continued service as a director of the company untenable,” a statement from the board said.

Libya election postponed Libyans were meant to go the polls today, but after the High National Electoral Commission ordered a dissolution of the electoral committees nationwide without naming a final list of candidates, the commission said it was “impossible” to go forward with the planned election. The election board has proposed January 24 as the new date for the poll.

Christmas Eve celebrations Pope Francis will hold “midnight mass” at St Peter’s Basilica (although the ceremony hasn’t been held at midnight since 2009, when Pope Benedict XVI moved it to 10pm). Traditional Christmas Eve midnight mass will also be held at the recorded scene of Jesus Christ’s birth — at the Church of the Nativity on Manger Square in the West Bank town of Bethlehem.

Where have weather records been broken this year? The year 2021 has been getting progressively warmer than normal, with global temperatures inching higher than the average with each passing month. The FT is tracking extreme and record-breaking climate events from around the world. Explore our interactive tracker.

In Hong Kong, the poor scavenge for cardboard Cheung Yuk-fong, 70, spends her day collecting discarded packaging for re-sale, a growing industry in one of the world’s most unequal cities. She is one of Hong Kong’s “cardboard grannies”, who, in a day’s work, earn up to about HK$60 (US$7.69) — barely enough to buy two meals in a fast-food restaurant in one of the costliest cities in the world.

Jair Bolsonaro turns to the establishment For an outsider who won Brazil’s presidency criticising the traditional political system, to tell an audience of legislators “I feel at home here” as the far-right leader recently did, was a remarkable volte-face. With less than a year to go until the presidential election, the incumbent is on the ropes.

How bad was 2021? Chief foreign affairs columnist Gideon Rachman is joined by colleagues Martin Wolf and Gillian Tett to look back at a year bookended with Donald Trump’s chaotic exit from the White House and Vladimir Putin’s threats against Ukraine, with the ever-present inflation raging throughout.

“We always drink good wine at Christmas, but the only time we’ve opened a really, really good (read: seriously expensive) bottle was last year, when social gatherings were limited to a single household and, for the first time ever, it was just us two,” writes Jancis Robinson on the best time to drink seriously expensive wine.

Thank you for reading and remember you can add FirstFT to myFT. Send your recommendations and feedback to firstft@ft.com